Steve Baker, the deputy chair of the Conservative Party’s eurosceptic European Research Group gave a huge hint over who Brexit supporters would back in the Conservative Party’s leadership contest. On the eve of the European elections, Andrea Leadsom, the former Leader of the House, resigned from her role, after the Prime Minister set out her fresh Brexit approach earlier in the week. With the Prime Minister reportedly on the brink amid pressure within her own party to resign, Channel 4 News host Cathy Newman asked whether “Boris Johnson can do any better”, and whether Mr Johnson could count on the support of Theresa Villiers and Steve Baker.

Ms Villiers replied: “I haven’t decided who I will back.”

But, during his colleague’s response, Mr Baker had a huge grin on his face before he replied.

Mr Baker said: “The next prime minister needs to be somebody who believes in what we are doing.

“Who knows what to do, why we are doing it, how to get it done, who to bring in to provide the expertise. 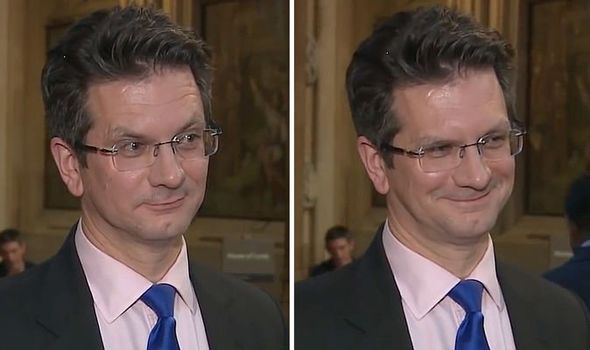 “It is by no means settled who that will be, but it is clear in the polls of members Boris is in the lead.”

He added: “But, Dominic Raab is a very talented man as well.

“But, I do think the next leader really needs to be someone who really believes in what we are doing.”

On the eve of the European elections, the Prime Minister was dealt a huge blow with the resignation of the Leader of the House, Andrea Leadsom.

Ms Leadsom, who originally challenged the Prime Minister for the leadership of the party back in 2016, said she could no longer support the Government’s policy.

On Tuesday, the Prime Minister’s speech angered many Tory voters, as it opened the door to a second Brexit referendum, and if supported, would allow Parliamentarians a say on customs policy.

In her resignation letter, Ms Leadsom said her decision to quit as Leader of the House comes with “great regret”.

A Downing Street spokesman said: “Andrea Leadsom has served with distinction and great ability as a member of the Government, and the Prime Minister is grateful for all of her work.

“We are disappointed that she has chosen to resign, and the Prime Minister remains focused on delivering the Brexit people voted for.”

The Prime Minister is expected to meet with the Chairman of the Conservative Party’s influential 1922 Committee, Sir Graham Brady, with reports suggesting she may step down.

Speaking ahead of the showdown with Sir Graham, 1922 Committee treasurer Sir Geoffrey Clifton-Brown said: “I want her to give a timetable for when she will go.

“I think this blank denial from Number 10 today may be a smokescreen because she does not want to influence the outcome of the European elections. Maybe she will still quit tomorrow.”