NAPLES, Italy — Italy’s desperate need for a financial shot in the arm is palpable at all levels of the economy, from the entrepreneurs in the industrial north who are hungry for tax breaks and a streamlined bureaucracy to the welfare seekers in the poverty-stricken south, with its dizzying levels of youth unemployment.

But how best to invigorate the Italian economy has reanimated a wrenching debate for Europe over whether to spend or cut in the face of financial peril. On Tuesday, Italy is expected to resubmit a largely unchanged and high-spending budget to the European Union, which is expected to reject it, for a second time, and begin the rare process of punishing a founding-member nation with penalties in the billions of euros.

The argument has haunted Europe since the financial crisis of 2008, of which the consequences, including uneven recoveries and persistent economic inequality, continue to ripple through southern Europe. Italy’s populists came to power in part by blaming Brussels for stifling their economy with strict budget rules. The budget from Rome is the first real, and not just rhetorical, assault on the establishment order of the bloc.

The question is whether the budget is a serious stimulus plan or a bank-breaking populist giveaway larded with tax cuts, pension benefits and welfare programs that neither Italy nor the European Union can afford. A crash of the Italian economy, one of the largest in the bloc, could sink everyone. Doubts among investors have already caused an increase in the yields of 10-year government bonds — an indication that markets view Italy as a riskier country to lend to.

But Italy’s populists, who are holding more meetings today, appear unwilling to budge. The anti-immigrant League, led by Matteo Salvini, has sought tax cuts to please its business-friendly northern base. The anti-establishment Five Star Movement, led by Luigi Di Maio, is looking to rally support in the relatively poor south with a welfare program estimated to cost around $9 billion. Both parties are looking to consolidate before European Parliament elections in May, which are seen as a test of their power at home. 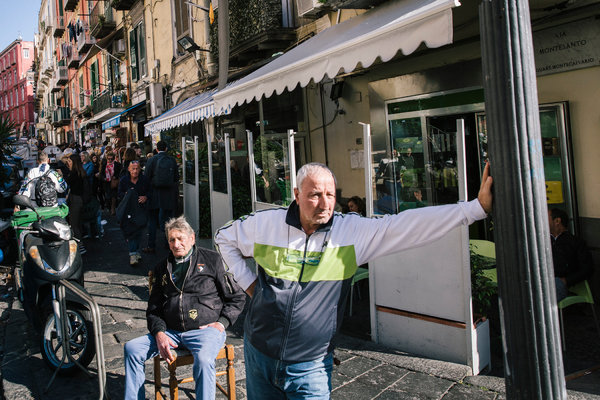 “If we had acceded to the budget they probably expected in Europe, we would not have protected the interests of the Italians,” Prime Minister Giuseppe Conte said recently.

The government’s argument in favor of spending might be more persuasive if Italy’s public debt were not already 131 percent of G.D.P. But it is precisely the combination of high debt and low growth — now about zero percent — that has left Italy struggling to find a way out of its economic dead end.

Yet even some supporters of the expansive Italian spending are worried that the country’s leaders are playing politics with the economy.

“It’s schizophrenic,” Gennaro Ferrillo, the director of a job center in Naples said of the opposing policies in the budget. “To put the two together is in complete contradiction. On the one hand, you have a tax break that reduces revenues, and on the other, you have increased spending to address the needs of the poor and those harmed by the crisis and austerity.”

Mr. Ferrillo was speaking after the lone hour that the job center he runs on a dusty street on the outskirts of Naples opens in the afternoon. The Five Star Movement has envisioned registration at these centers — some of which lack internet connections — as a prerequisite for receiving its proposed “citizens’ income,” essentially an unemployment benefit that would be worth about $875 a month for about six million struggling Italians.

“The help is necessary,” Mr. Ferrillo said of the aid, “to help people work, to keep them from being forced into the black market where they are exploited and completely lose their dignity.”

But he said that he had seen no details of the plan and that a proposed, billion-dollar overhaul of the job centers would have to be carefully thought out if it was to be effective.

“Everyone is asking how will the government and Di Maio do this revolutionary measure for Italy,” he said, adding that, “it’s practically impossible unless there is also a revolution in the centers.”

The European Union does not appear convinced. Weeks ago, Brussels rejected Italy’s proposed budget with instructions to cut a 2.4 deficit spending level that is three times as large as the one offered by its predecessor.

Mr. Salvini has opted for what he calls a flat tax, a proposed cut of 15 percent for small businesses and individuals making up to $73,000 a year, that is designed to please his base in the north, the country’s industrial and economic heart.

Along orderly streets lined with canals and handsome shops in the wealthy northern town of Treviso, a stronghold of the League, residents welcomed the proposed tax break. National, regional, provincial and city taxes, as well as those on utilities, can add up to about 65 percent in Italy, suffocating businesses.

Even so, officials at the headquarters of Confartigianato, an association of Italian small businesses that have an average of about four employees, in the northeastern region of Veneto, expressed doubts about the seriousness of the government’s proposals.

In fact, they say, it is the combination of uncertainty, a lack of clarity in what the government is offering and a looming conflict with the European Union that is paralyzing small businesses.

“Day after day, the government changes its information,” said Vendemiano Sartor, the president of the group’s Treviso chapter.

The group’s policy shop has not started calculating the real impact of the tax proposal because there has not yet been a concrete proposal to study.

This government, according to Agostino Bonomo, the association’s president in Veneto, “makes only electoral slogans and gives no clarity and has no vision for business.”

The businesses “are waiting,’’ he said. ‘‘They aren’t moving.”

Entrepreneurs, he added, feared a devaluation of Italy on the international markets that would hurt its reputation and lead to a drop in work orders from abroad.

Increasingly, people in Veneto are moving their bank accounts to Austria, said the officials, who also expressed concern that the standoff with Brussels was more about stimulating frustrated voters than about improving the economy.

Just as the north of Europe tends to resist paying for what it sees as fiscally undisciplined southern countries, the pro-business north of Italy, where joblessness is not an issue, does not want to pay for a huge expansion of welfare in the south, where youth unemployment can reach as high as 50 percent.

“What we’re protesting is that we are spending money in this country to create a dependency culture,” Mr. Sartor said. “If the south drains resources, it’s not that we can just say, ‘Oh well.’ It’s 100 years like this!”

But the Five Star Movement campaigned explicitly on the promise of delivering that assistance, and their support ballooned in the south partly as a result. The economic realities that come with governing have forced the party to backtrack on some guarantees, such as its opposition to a gas pipeline in the southern region of Puglia that it campaigned against for years but now calls strategic. The so-called citizens’ income, however, is now a critical element in their political identity.

Killing time with other unemployed women perched on parked scooters, Filomena Polumbo lamented the lack of job prospects in the city for herself and for her adult children and their spouses, with whom she shared a small apartment in a crowded street up the hill. Her sons-in-law managed to “get by,” she said.

“They steal!” her friend Giuseppina Iaccarino, 35, said with a laugh.

Ms. Palumbo, a 38-year-old grandmother, shushed her friend but then conceded with a shrug: “They can’t even get by doing that anymore. There’s not enough money going around. It’s not worth going to jail for nothing,” she said.

She said she had voted for the Five Star Movement because she hoped that its promised relief program — which the party’s leaders have sought to equate with the 1930s-era New Deal in the United States — would provide an alternative. “The government has to get the money flowing,” she said.

Since taking office though, Five Star’s popularity has shrunk while the League’s has expanded. The League is applying pressure on Five Star to support a high-speed rail project through the Italian Alps to France. Mr. Di Maio, who has a record of flip-flopping, keeps getting outplayed by Mr. Salvini and is clearly desperate to deliver. But it is his welfare proposal that is driving deficit spending through the roof and attracting the censure from the European Union.

In recent days, Mr. Di Maio has begun exploring the possibility of saving face by scaling back the welfare program, which critics say is merely an expanded version of the system put in place by the previous government that he excoriated.

Some of the hundreds of people who turn up daily up at the Naples job center have already started asking for the citizens’ income even though it does not yet exist. On a recent afternoon, Daniele Peluso, 17, showed up looking for a job. Instead, he found a guard explaining to frustrated job seekers through a locked fence that the region had failed to update its website for its new operating hours. They were now 2 p.m. to 3 p.m., not 2:45 to 3:45.

Crestfallen, Mr. Peluso turned away. His father, Luigi, 55, who had accompanied him, said he hoped the citizens’ income would eventually help unemployed young southerners like his son. Daniele agreed, but added that he had some reservations if the job centers were to be involved in distributing the funds.

He gestured to the guard and the locked gate. “It’s a bad start,” he said.