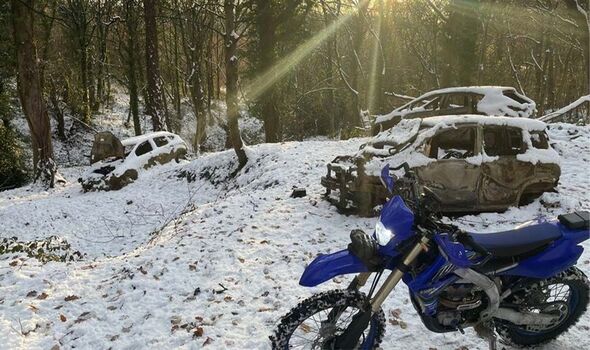 A ‘graveyard’ of stolen cars and vehicles have been discovered by police. The site was discovered by off-road officers patrolling Buck Wood, in Gleadless Valley, Sheffield.

Buck Wood, where the ‘car graveyard’ was found is part of seven Heritage Woodlands in the Gleadless Valley.

Images from the area, which was woody and snowy, show three vehicles in view, and a motorbike. The cars, which police say were stolen, were burnt out and abandoned, leaving the area looking like a scrap yard.

A blue motorbike can be seen in the foreground of the image, with three cars dumped behind it. All of the vehicles were torched and could be seen to be badly burnt. One of the cars had the bonnet left open, while another vehicle was badly dented.

The area where the vehicles were discovered was covered in snow following a recent cold spell, leaving the abandoned vehicles blanketed in snow and ice.

According to Yorkshire Live, a spokesperson for South Yorkshire Police’s Operational support said: “Off Road Bike Team came across a Graveyard of cars… local scrap yard? No.

“These cars had been stolen, dumped and set fire to in this ancient woodland.”

Buck Wood is situated nearby to the suburbs Newfield Green and Arbourthorne in Sheffield.

Baby Archie Harrison christening: Who will the godparents be? Latest odds