ATHENS — When paintings by Picasso and Mondrian and a sketch by the Italian artist Guglielmo Caccia went missing from the National Gallery in Athens in 2012, it was the beginning of a mystery that lasted for nearly a decade.

That mystery ended this week when the works by Picasso and Mondrian were recovered unscathed from a ravine in a forest near Porto Rafti, a town east of Athens.

In custody is not a gang of thieves who planned a Hollywood-style heist, but a 49-year-old construction worker, with the Twitter name ArtFreak, who was arrested on Monday.

The theft appears to have been years in the making as an obsession with art morphed into something criminal. The suspect, who was appearing before an investigating magistrate on Thursday, is reported to have told the police that he had “always been interested in art.”

Comments that the suspect made to investigators were leaked in the Greek news media, and the suspect’s lawyer, Sakis Kehagioglu, confirmed that what has been published is what his client told the police. The suspect’s name has not yet been released by the authorities.

The suspect detailed his bold, one-man break-in, telling the police, “In 2012 I entered the National Gallery and got three paintings,” according to the leaked comments. He said he “deeply” regretted his actions, which weighed on his conscience and left him sleepless.

The three artworks were Picasso’s “Head of a Woman,” a 1939 work that the Spanish master dedicated to the Greek people for their resistance to Nazi occupiers in World War II; “Stammer Windmill,” a 1905 work by the Dutch painter Mondrian; and a sketch by the 16th-century Italian artist Guglielmo Caccia. The Caccia sketch was damaged during the robbery and discarded, the suspect told the police. 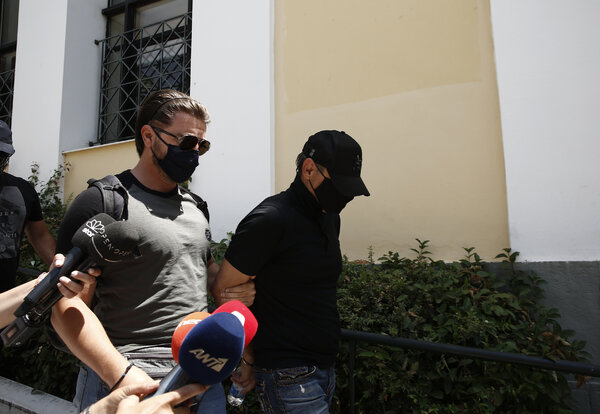 After confessing, the suspect led officers to the ravine and a briefcase wrapped in plastic containing the Picasso and Mondrian works. According to the news reports, the suspect said he had moved the paintings there in May after reading that the police might be onto him.

Before that, the suspect had kept the paintings at the home of a relative that he frequently visited to look at them, Mr. Kehagioglu, his lawyer said.

“He was an art lover, he wanted to see the paintings, to enjoy them,” Mr. Kehagioglu noted, adding that he would seek leniency for his client, who he said faced five to 10 years in prison if convicted of the theft.

Greek news media reported claims on Wednesday and Thursday from art historians in the Netherlands and Italy that attempts had been made to sell the works.

Mr. Kehagioglu said his client had made no effort to sell the works.

The suspect reportedly told the police that he had spent months making “constant visits” to the National Gallery to familiarize himself with the works and space “until I believed that one of them could become mine.”

“These thoughts tormented me for about two years and led me to make the biggest mistake of my life,” he was said to have admitted.

For the six months before the theft, the suspect said he had visited the gallery more than 50 times, studying not only the works and the space, but also the behavior of the guards and the location of windows and cameras.

“I knew all the guards’ habits, when they changed shifts, who smoked, who went out in the garden,” he said in the leaked comments. “And that’s how I decided to do the robbery,” he added. “I hadn’t decided which work I would take, but just that I wanted one.”

To prepare for the robbery, he said he had bought black clothes and boots and readied some of his construction work tools — a hammer, a chisel and a knife. The day of the theft — Sunday, Jan. 8, 2012 — was chosen at random. He took the metro into town, changed clothes in a park next to the gallery and waited until the museum’s 9 p.m. closing time, before finding a balcony with unsecured doors. When he moved a door and a beep sounded, he said, he reconsidered his course of action, went for a quick walk and smoked several cigarettes — the butts of which he said he gathered in a bag — before returning to try again.

“That’s when I decided that annoying the security guard was the best way to do the theft, by making him believe that there was a technical problem in the alarm zones,” the suspect told the police. So he opened and closed the door several times to confuse the guards. But it was not until 4 o’clock the following morning that he entered the gallery, he said, describing in detail the slow process of sneaking and crawling through the rooms. His account suggests he came across his loot almost by accident.

“I got up and found myself in front of the painting by Picasso,” he said, adding that he removed it from the wall and then from its frame before doing the same with the Mondrian and the Caccia.

That process took five to seven minutes, he said.

Mr. Kehagioglu, the lawyer, said that his client was no regular thief and that his remorse had led to the paintings’ safe return. “There are bank robbers that steal millions and never give it back,” he said. “He showed genuine regret.”