Officials will continue their investigation into the fatal train derailment in Aberdeenshire, which killed three people and injured six others.

On Wednesday, the 6.38am Aberdeen to Glasgow Queen Street service crashed near Stonehaven, an area that had been hit by heavy rain and flooding. 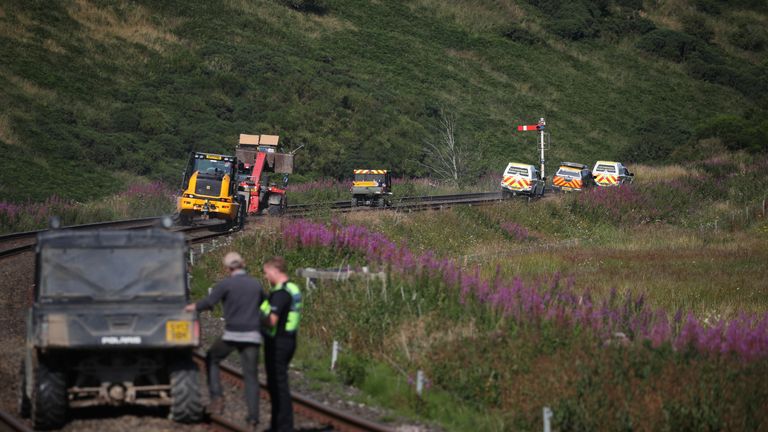 Aerial shots showed one carriage completely overturned, with rail industry sources telling the PA news agency that the suspected cause of the crash was a landslip.

ScotRail confirmed the three who died were the driver, the conductor and a passenger.

Scottish Transport Secretary Michael Matheson revealed those who were injured continue to be treated in hospital, but none of their injuries were life-threatening.

An investigation is being directed by the Crown Office and Procurator Fiscal Service (COPFS), who will work with a team of inspectors from the Rail Accident Investigation Branch and Office of Road and Rail.

UK Transport Secretary Grant Shapps and Mr Matheson were both due to visit the site on Thursday and meet members of the emergency services.

Network Rail chief executive Andrew Haines was also due to visit the crash site on Thursday after cutting short a family holiday in Italy.

Last month, Network Rail was warned about not keeping up with extreme weather events after an annual report noted a spike in landslips on Britain’s railways, demonstrating the “vulnerability” of the network.

Ahead of his visit, Mr Shapps posted on Twitter: “That fatal derailments are so rare only deepens the sense of shock and sadness about those who lost their lives and were injured yesterday morning.

“Headed to Stonehaven to thank emergency services, ensure every measure is taken and that each lesson is learnt from this tragedy.”

Mr Matheson told Sky News the immediate emergency response to the crash had now moved into an investigatory stage in order to “quickly” learn lessons from the incident.

“There are established protocols, very strict protocols, within the rail industry for trains operating within adverse weather,” he said.

“My understanding from Network Rail is those protocols were applied yesterday to this particular service.”

But, noting how some parts of Scotland experienced a month’s rainfall between Tuesday night and Wednesday morning, Mr Matheson added: “There is no doubt that climate change and these types of intense weather events are having an impact on the transport network, which was not designed to deal with these types of incidents”.

He said “mitigation measures” were needed to minimise the risks of extreme weather.

Thunderstorms had caused flooding across Aberdeenshire on Wednesday, prompting the cancellation of some rail services and the shutting of a number of schools.

Prior to the news of the crash, Network Rail Scotland posted a video on Twitter of a landslip and flooding on rail tracks at Carmont.

Smoke rising from the scene of the Stonehaven derailment suggested it occurred near to a bend in the tracks close to Carmont, although it is unclear whether the landslip highlighted by Network Rail Scotland’s Twitter account was directly related to the incident.

Commenting on the suspected reasons of the crash, Nigel Harris, the editor of Rail magazine, told Sky News: “Somewhere south of Stonehaven the driver encountered an obstruction, a landslide, on the track and had to reverse his train and go back along the way he’d come.

“And then go onto his own line and head back north towards Aberdeen, at which point he ran into another landslide which had clearly happened after he had passed by in a southerly direction.

“That then caused this terrible incident.”

He added that Wednesday had brought the “worst flooding I have seen in the northeast for a long, long time.”

The Queen, Prime Minister Boris Johnson and Scottish First Minister Nicola Sturgeon have led tributes to those killed in the crash.

Anyone worried about friends or family involved in the derailment is being urged to call the NHS Grampian helpline number on 01224 319519 for advice and support.