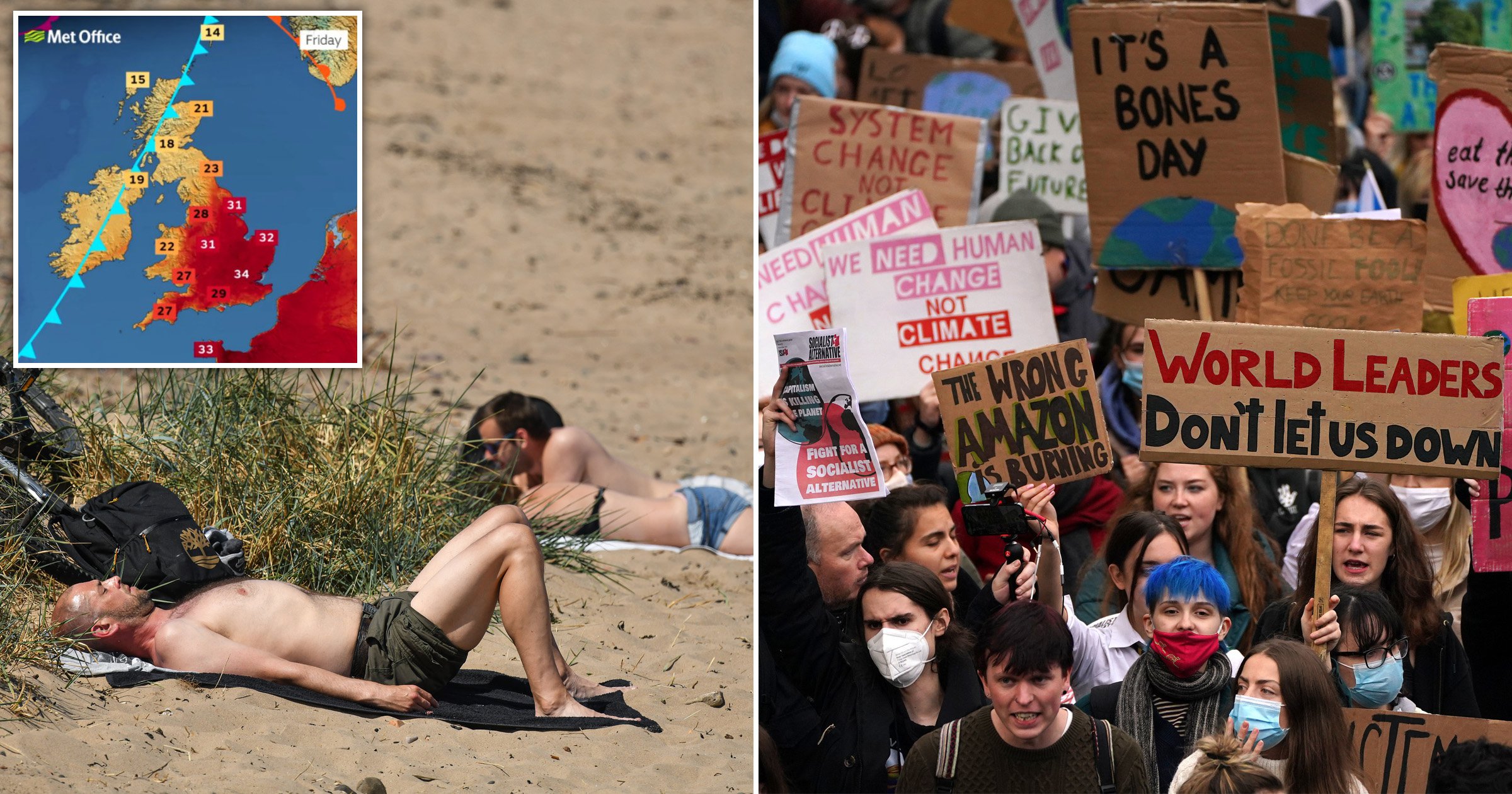 As Britain reeled in the reality of 40° Celsius earlier this week, I adjusted to fresh climate anxiety.

I first felt it when phase two of HS2 – a new high-speed rail line joining London with the north-west – was approved in 2019, despite an estimated destruction of nearly 700 wildlife sites, according to The Wildlife Trusts.

More recently, those same stomach knots fuelled my fury at the existence of  increasingly commonplace artificial lawns contributing to plummeting hedgehog numbers at a time where the UK ranks among the most nature-depleted countries in the world.

This week, however, I’m struggling. Nothing compares to the full-body tension of seeing climate change reveal itself so spectacularly and so resolutely in the UK’s latest heatwave. I can’t unsee it.

But here’s the thing: I’m terrified that we love it.

Roughly one in seven species in the UK risk extinction due to climate change, yet many initial news reports forecasting the heatwave were delivered with smiles and slideshows of children eating ice creams. This heatwave is captivating us, but not – I dread – for the right reasons.

We swap temperature scores like bookies at the races. We swelter. We branch out, generously sharing air-conditioning top tips on TikTok. Some even give thanks – as if the heatwave is repaying the British Isles’ overdue sunshine debt. Then we monopolise. Anyone for an organic, pale rosé? Pop ‘HEATWAVE20*’ in the checkout (*discount valid for a limited time only).

Naturally, as humans, we unite in uncertainty. We make do, mend and write home about it because we tell ourselves it’s a one-off event. Then, as always, we move on, preferring to remember it as a phenomenon to nostalgically recount.

But life cannot resume as we know it – not after this. Maps and models told us these temperatures would happen in 2050. We thought we had more time.

But instead of a government-led emergency response, our reaction felt dangerously homemade. Ice baths, iced lattes, fans, tans and tropical nights sound more like a scene from Top Gun than a glaring reminder of our naivety.

In my local zero-waste shop, the owner brandished a (albeit wooden, hand-carved) spoon, threatening she’d lob it at the next person who complains about the heat, telling me it’s ‘about time’ we saw some sun.

‘Stay cool!’, we now sign-off, while nature gasps on life support against the backdrop of a two-week fire alarm.

Despite scientists giving us ample time to warm up to this reality, we have yet to normalise a way to communicate extreme weather events that isn’t wildly misleading.

Is this a personal weather-best for Britain? Or a world reaching its limits within our lifetime?

Toplines like, ‘are soaring temperatures linked to climate change?’ risk perpetuating the fundamental disconnect between climate breakdown and ‘this lovely weather’ to thousands of curious readers.

Many key native species are at immediate risk in a heatwave. My book, Forget Me Not, opens with my bike ride across the Cornish moors, searching for one of Britain’s rarest butterflies: the marsh fritillary. Associated with grassland habitats, soaring temperatures could accelerate its larval development.

By emerging earlier in the spring, the marsh fritillary could outrun predation from a crucial parasitic wasp, unleashing a short-lived boom in butterfly numbers, a shortage of suitable butterfly food, then an inevitable crash crash in butterfly numbers. The spring of 2020 saw the earliest sightings of butterflies in Britain in the last 20 years.

Are we willing to push nature into dramatic boom and bust scenarios?

Similarly, the bilberry bumblebee – Britain’s ‘mountain bee’ and one of our furriest – literally overheats in high temperatures: too hot to fly, feed, pollinate, and survive.

In the marine environment, average sea surface temperatures have warmed by almost 0.5°C in less than a decade. Toxic algae blooms in warm water, poisoning seabirds like guillemots, disrupting the navigation system and life cycle of key migratory species, like Atlantic salmon.

The questions we should be asking are: how is the UK preparing? When will our infrastructure acknowledge and support a changing climate? Which species of ecosystem engineer are we reintroducing to increase landscape resilience to drought, wildfire and flooding? Which habitats are we restoring to improve carbon capture?

Other nations: the United States, Canada, Mozambique, Ghana, China, Australia have been here before. California wildfires, for example, are now an annual occurrence, spurring a ready and routine response. The Mozambique Government has heavily invested in disaster relief funds, early warning systems and resilient construction – retrofitting schools, hospitals and libraries.

Back in the UK, we’ve often watched wildfires, typhoons, floods and climate-related starvation from the side-lines. But we have a new role to accept: as active participants in this climate emergency, instead of bystanders.

No longer will screens, oceans and skies separate us from change. We need consistency in the way heatwaves are reported, and dare to admit the link between our lifestyles, and extreme weather events.

We seek confidence, clarity and economic bravery from the UK Government for solution-led action for nature, to mitigate against irreversible devastation.

The other day, I opened a window, only to disturb three small birds from their shady refuge in my defiantly un-mown, urban front lawn. They later returned.

Hope does exist. A brighter future alongside nature exists. It has to. But we need action without hesitation.

‘Forget Me Not: Finding the Forgotten Species of Climate-Change Britain’ by Sophie Pavelle is published by Bloomsbury Wildlife and is out now (Hardback: £16.99)