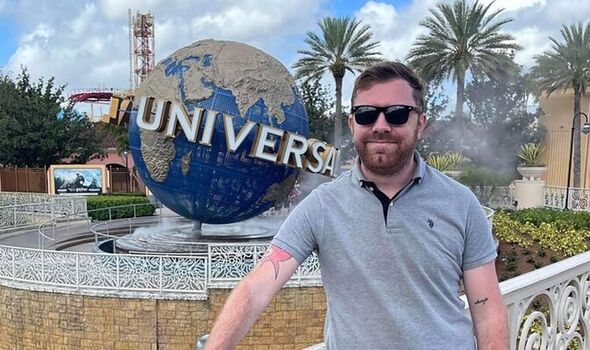 A stranger saved a man’s life by performing CPR for 13 minutes following a car crash.

Mike Van Driel, aged 32, said he was “just doing his job” by rushing to help Stephen Reynolds, who’d crashed his car into a field and speed camera in Bromborough, Merseyside. Mike had been shopping at an adjacent retail park when they saw the collision.

Stephen was slumped in the driver’s seat, showing all the symptoms of a possible cardiac arrest, after the crash.

Mike, who was off duty from his ambulance service job, said he “clicked into action” and worked on the man continuously until paramedics arrived.

Speaking to Liverpool Echo, Mike said: “I went up to the driver’s side and I could see he was slumped at the wheel so I thought I needed to get him out the car. The door was locked but he had a crack in the window so I just reached my arm through and opened it.

“I could tell by his symptoms that he wasn’t okay. I took his seat belt off and with the help of another guy, we dragged him out of the car.

“When I arrived at the car he was still there, but he was just on the verge, like he was about to drop out.

“I then just started performing CPR on him, for about 13 minutes continuously until the paramedics turned up. Then I just assisted them with whatever they needed.

“Luckily we managed to bring him back.”

When I arrived at the car he was still there, but he was just on the verge, like he was about to drop out

Despite being a first responder, it was the first cardiac arrest Mike had experienced. Mike, from Ellesmere Port, Merseyside, added: “For me, it was like switch on now and do what you’ve been trained to.

“I had to tell my parents to back off for a minute and just let me do what I needed to. You don’t realise when you’re doing it how much adrenaline is going through you.

“In training, we do two-minute intervals and then our crew mate will swap over, but because I was just determined not to give up on him I thought I’d keep going, I’m not going to stop there. I’d keep going as long as I could then paramedics turned up and we brought him back.”

He’ll also be honoured by Merseyside Police for his actions to help save Stephen’s life at a reward and recognition ceremony in December. He said he was also overwhelmed by the praise from Facebook, after his mum’s posts about her hero son received thousands of likes.

He added: “The praise is overwhelming really. It’s quite nice to see it. Again I’m just a guy doing my job but to see that recognition is unbelievable.”

Stephen is now on the mend following the accident.

Mike, who met Stephen recently at his home, continued: “It was great to see him up on his feet.

“I was getting nothing but praise from his family but I’m one of them – I respect what they were saying but I was just doing my job at the end of the day. Regardless of whether I was trained or not, I would’ve stopped and helped in any way I could.”

Months later Mike would play a part in saving another man’s life as he returned home from ambulance training. In mid-August he was stuck in a traffic jam as he drove through Ellesmere Port and noticed a group of people attempting CPR on a man who had collapsed.

He said: “There were a couple of people on the scene already, there was one guy called Ben, medically trained as well, and he was unbelievable.

“Him and a couple of people helping out, including a woman called Sophie, were brilliant, and between us all we managed to bring this guy back. I’m not taking all the praise for this because the group that helped were brilliant.

“With situations like these you go home thinking what if: did they make it, didn’t they?

“That day I was going for a family meal, but when I got home I just cried. When you get home it all hits you.

“At the time you get on with it then you have your moments when you can breathe and process what you’ve been through.

“But to be in this situation two times and the people be still with us today, for me that’s priceless.”

Prince William lays bare clash with the Queen: ‘You don’t mess with your grandmother’

Tens of thousands of homes still without power after Storm Arwen