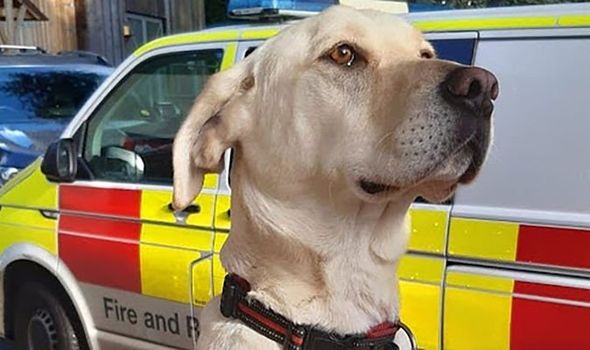 Bailey was found as a stray when he was taken in by the Dogs Trust ‑ but was deemed ‘unruly, untrainable and unsociable’. But one man saw potential in the pup, and is now putting the ‘rescue’ into Essex County Fire and Rescue Service (ECFRS).

The dog had been described as ‘rude and stubborn’, but ECFRS dog handler Graham Currie saw the abandoned dog had drive and determination, and took him on a six week trial from Loughborough Dogs Trust.

He said: “After testing Bailey’s drive for a tennis ball and checking he had no aggression towards other dogs or people, I offered to take him on a trial.

“The biggest thing was getting him in the van because he associated it with being taken to a compound, but within 24 hours he was taught to associate it with fun.

“By the third day, I was 95 percent sure he was the one. In the vehicle barn, there was rugby ball on a ledge above the gym weights and he wouldn’t give up until he got it – that’s the kind of determination we are looking for in a search dog.”

But Graham admitted he was ‘reluctant’ to take a Labrador at first, known for being greedy and easily distracted with food.

He added: “I was looking for a springer, cocker or sprocker spaniel bitch because I’ve found they are less stubborn and easier to train. Bailey has got that drive though and he’s not greedy, he’d take a ball over a bowl of food every time.”

Bailey is around 18 months old, and after their trial, Graham ‑ who is also a crew manager at Urban Search and Rescue ‑ paid £185 to adopt him, making him the newest member of the Essex County Fire and Rescue team.

The pup underwent a seven-day training searching buildings and rubble piles, with his handler describing him as a ‘natural.

Graham said: “To start with, we were hiding tennis balls to see if he would find them without being scared of the rubble. He is one of the most natural search dogs I’ve ever seen – he’s like a mountain goat! Nothing fazes him, he has no fears or phobias.

“A police trainer and colleague said if we could clone this dog all our problems would be solved. He was described as unruly, untrainable, unsociable, rude and stubborn. But a dog that cost us £185 has turned out to be the most incredible creature.”

The Labrador will live with Graham and his three other dogs, including search and rescue dog Jarvis, who Bailey will take over in his retirement – as well as fire investigation sprocker spaniel, Fizz, and pet dog Ailith, a 12-year-old springer spaniel, who is learning the search ropes from her working housemates.

Graham, who is based in Lexden, Colchester, said: “We treat them like dogs. They can go and play, chase each other, swim in rivers and the sea, but as soon as the search harness is on, they know they have work to do.”

Bailey will be one of 20 dogs used by USAR teams up and down the country, and he will be part of UK International Search and Rescue, attending disaster zones across the globe.

It usually takes 18 months to three years to train a dog but Bailey, whose nicknames are Beast from the East and the Polar Bear, because of his size, could be “on the run” as early as next April.

“He searches buildings so methodically; he’ll go in the first door in the building or corridor, check all the rooms attached to it and go back to the corridor and do the same on the next door, and so on.”

“We’ve landed on our feet with Bailey – and so has he, because he has a lovely home now.”

Britain says China has questions to answer on coronavirus outbreak