Jacob Rees-Mogg urges MPs to 'lead by example' on pubs

And yesterday, the morning after the night before, the effects in towns and cities across England were clear. Town hall bosses slapped a 10pm curfew on Primrose Hill, north London, on Saturday, after complaints about anti-social behaviour, noise and drug use. But it failed to stop large crowds and the beauty spot was found littered with debris. Emergency services warned people to know their limits and most behaved impeccably. But for others, the taste of freedom was too much.

A despairing mother tweeted: “With lockdown easing I spent six hours in A&E with an unconscious daughter who’d drunk too much and collapsed on Primrose Hill at a party.

“The police told me they’d dealt with another 10-12 of the same age and condition.”

About 20,000 pubs and 20,000 restaurants served 10 million pints to 12 million people in the busiest drinking bout for six months.

Orders were double that of a usual Saturday as punters had a £100million blowout. 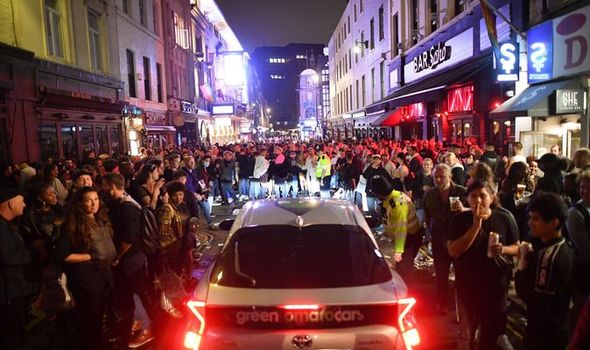 Outdoor seating in Leeds, Liverpool and Newcastle were fully booked for weeks as people toasted the first weekend since Covid restrictions eased.

Tens of thousands descended on Soho, in London’s West End, forcing police to disperse crowds who partied after last orders without masks or observing social distancing. Professor Adam Finn, on the Joint Committee for Vaccination and Immunisation, said: “The risks of transmission outside are relatively low, but not if you start coming into very close contact.”

People must remain outdoors and are limited to groups of no more than six or two households. Pubs reopen in Wales and Scotland next Monday and outdoor service in Northern Ireland begins on April 30.

Police in Worcester are investigating claims by three women taken to hospital that their drinks were spiked.