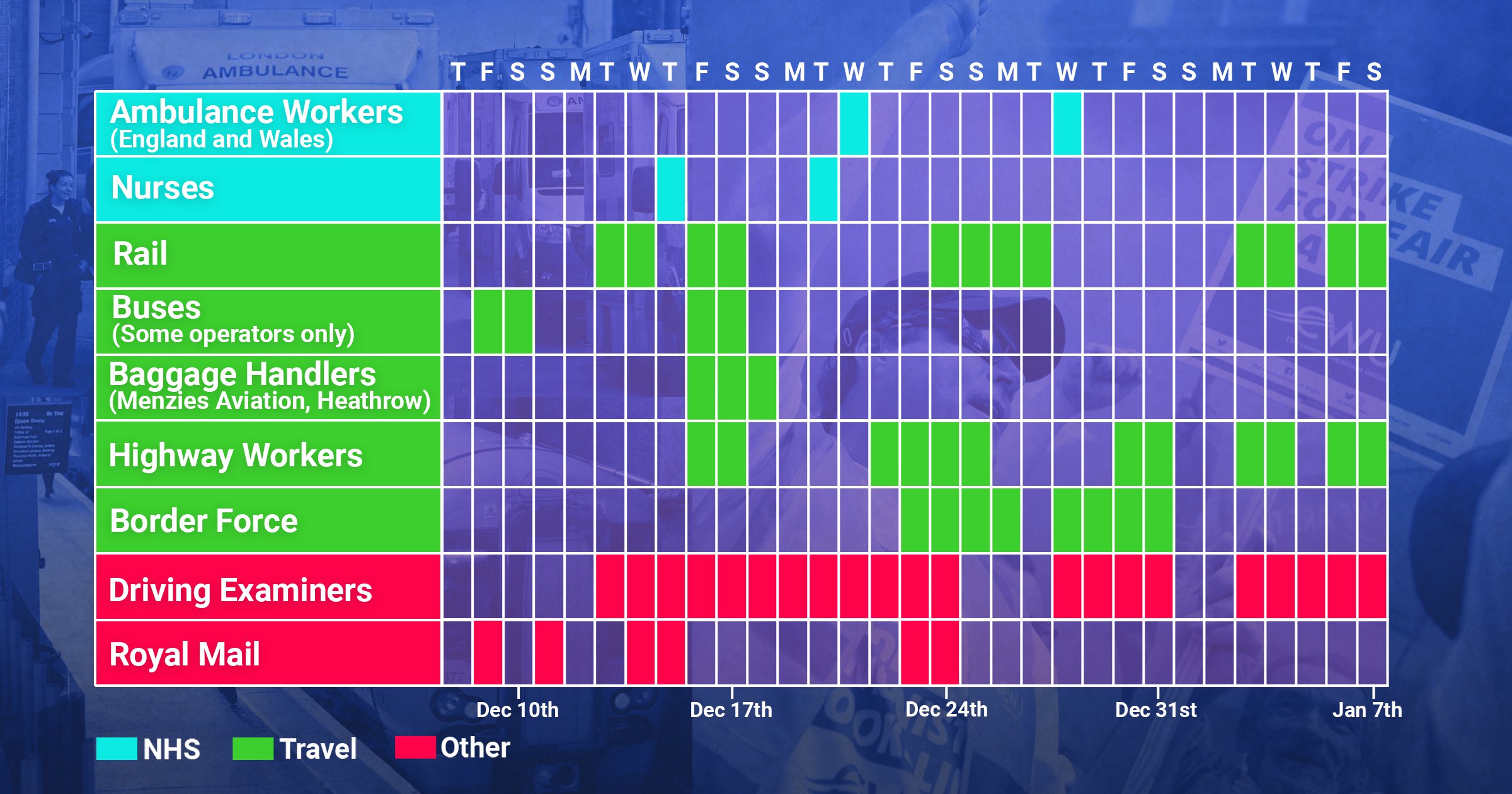 The UK is bracing itself for more travel disruption that is looking to extend into the new year, with more train strikes announced for December and January.

It was thought that December’s rail strikes could be called off after the Rail Delivery Group (RDG) held talks with the RMT (National Union of Rail, Maritime and Transport Workers).

However, RMT boss Mick Lynch announced on December 4 that he had rejected the RDG’s offer of a 4% pay rise for 2022 and 2023 ‘as it does not meet any of our criteria for securing a settlement on long term job security, a decent pay rise and protecting working conditions.’

The RMT leader has now requested a meeting with Prime Minister Rishi Sunak in an open letter stating: ‘it is now clear to my union and the wider public that No. 10 is directing the mandate for the rail companies and has torpedoed the talks.’

So, when can you expect the round of strike action to take place? Here’s all you need to know.

When are the next train strikes?

Train drivers are next set to strike this week on Tuesday, December 13, through to Saturday (with the exception of Thursday)

When are the train strikes?

RMT members will be taking strike action on the following dates:

Although there are no walkouts due on Thursday, you should expect delays as a knock-on from the previous two days of strikes, before more strike action occurs from that December 16.

An overtime ban planned for 18 December until 2 January has been cancelled, said the RMT on December 5.

Which rail companies will be affected by the strikes?

The strikes on December 13, 14, 16 and 17 and January 3, 4, 6 and 7 are national rail strikes, meaning there will be little or no services running across all rail companies nationwide.

The Christmas Eve action, starting at 6pm and lasting until 6am on December 27, will affect Network Rail – though it could be called off, if a members vote on a new pay deal swings in its favour.

However, there may also be localised rail strikes happening across December, such as Unite members’ action on East Midlands Railway – happening on Friday, December 23 and Saturday, December 24.

Why are the strikes happening?

Rail unions are in an ongoing dispute with the government and rail companies about pay, job cuts, and changes to terms and conditions – with a settlement between parties yet to be reached.

Unions say that their members’ salaries don’t reflect the rising cost of living.

RMT’s Mick Lynch has said of the latest action: ‘This latest round of strikes will show how important our members are to the running of this country and will send a clear message that we want a good deal on job security, pay and conditions for our people.

‘We have been reasonable, but it is impossible to find a negotiated settlement when the dead hand of government is presiding over these talks.’

He went on to apologise to the public for the inconvenience and urged ‘all trades unionists in Britain to take a stand and fight for better pay and conditions in their respective industries.’

Network Rail’s chief negotiator Tim Shoveller said: ‘No one can deny the precarious financial hole in which the railway finds itself.

‘Striking makes that hole bigger and the task of finding a resolution ever more difficult.

‘Only through reform, that will not result in anyone losing their job, can savings be made that can then be converted into an improved offer. And while progress has been made over these last two weeks, we still have yet to find that breakthrough.

‘We will not give up and hope that the RMT will return to the table with a more realistic appreciation of the situation.’

Boris ends Russian gas in UK – but how much gas do we get from Russia?