Home » Europe » Strikes, tears and burnout: The harsh reality of working in the NHS today

In her role as a psychotherapist, Claire Goodwin-Fee is used to helping people navigate trauma and deal with emotional issues, yet her recent work with NHS staff has left her in utter despair.

‘At present, the pressures on staff are worse than at the height of the pandemic,’ she says.

‘Mental and physical exhaustion is high on a list of issues for people alongside burnout, PTSD and high levels of anxiety. In a recent survey, 32% of frontline workers that we spoke to said they had felt suicidal in the last two weeks.’

The award-winning psychotherapist – who set up frontline19.com, a free service providing the NHS & frontline workers with emotional and psychological support at the height of the Covid crisis – adds that she is convinced lives are more in danger now than ever before, even in times of the pandemic.

‘The workforce is exhausted and demoralised and are working under horrendous pressure,’ she tells Metro.co.uk.

As nurses prepare for more strike action next week, the stories coming from the NHS frontline are not only deeply harrowing, but worrying and extremely bleak.

With the crisis deepening, it seems that not only are patients suffering, but so are hospital staff.

For 35-year-old Medical Registrar and Gastroenterology trainee Rosie – who works in an NHS hospital in the South West of England – the job is so overwhelming, it is rare for her not to cry after work. ‘I feel detached, hopeless and at a loss,’ she admits. 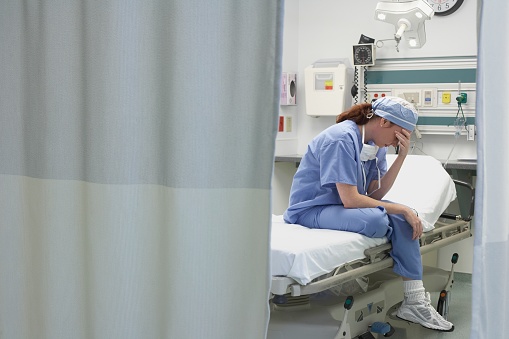 “My day job is Gastro (wards, clinic, endoscopy) but when I am on call every medical admission to the hospital goes through me and I am in charge of running emergencies and cardiac arrests on the wards for all hospital patients.

When she returned to work at the beginning of January, she describes a stint in the A&E department as being ‘like hell’.

Even when she went back to her day job, the stress didn’t abate as burnout and illness had left Rosie’s department depleted and she was asked to work on call throughout the night, as well.

‘I was told it was a patient safety issue and that I was the only one that could do it because of gaps everywhere else in the hospital,’ she explains.

‘I felt forced to go to A&E, take referrals for every patient with a medical problem needing admission to the hospital from both A&E and GPs.’

On the following day, Rosie explains she was responsible for telling two different families that their elderly relatives weren’t going to make it, while ‘juggling a million other things.’

To give an insight into her workload, Rosie offers this exhausting account:

‘I placed an emergency drain in resus into someone’s abdomen to relieve pressure from fluid (ascites) which was preventing them from breathing properly. I was managing a lady with sepsis and end stage kidney disease on dialysis who needed ITU admission and I knew I wasn’t giving her the focussed care she deserved because I was pulled in too many directions.

‘I went for lunch at 3pm and as I was eating the cardiac arrest bleep went off. I ran to a ward on the other side of the hospital, took over running the cardiac arrest and a team of around 10 people. Unfortunately we could not save this gentleman and I proposed to the team that we stop. Everyone was in agreement and we withdrew attempts.

‘While we were there I referred my sick lady in A&E to the ITU team for review. I then had to comfort one of our first year doctors who had never seen CPR before – for context it is brutal, ribs are broken and you can feel them under your hands as you do compressions – I hugged her as she cried and tried to comfort her but then got fast bleeped to another ward to another emergency.

‘I managed that and then had to go back to speak to the family of the man who had the cardiac arrest, comfort his daughter whilst she sobbed her eyes out and explain the next steps.

‘Then I had to go back to A&E to see my lady needing ITU who had been accepted but was waiting for a bed. After all that I had to document the whole days’ worth of work in retrospect and finished my lunch at 6pm.’

Such a pressured environment is causing her mental health to suffer, says Rosie.

‘It’s wearing, spending so much time apologising for treating people in corridors or chairs and not being able to offer them beds or basic comfort (we ran out of sandwiches last week).

‘Trying to have conversations about CPR and breaking bad news to relatives where so many people can overhear you, is just awful,’ she adds.

‘It is not right seeing 90 year olds dying in A&E departments instead of in a side room surrounded by their loved ones and it’s draining to know you’re working flat out but can’t provide the standard of care you know you’re capable of because of such a stretched over-burdened system.’

Being unable to provide privacy or dignity to his patients is one of the saddest parts of his job, says junior doctor Vassili Crispi, who adds, ‘we are at breaking point.’

The co-chair of the Yorkshire Junior Doctors Committee, he warns the NHS is unable to deliver proper care due to stretched resources.

‘There is no privacy or dignity we can provide to patients in these circumstances. I have attended to patients unable to mobilise independently asking for help because they needed to toilet and have soiled themselves,’ he tells Metro.co.uk.

‘I have looked after unwell, elderly patients who had collapsed from their chair in the middle of the night being exhausted by the waiting times.

‘During these on-call shifts, newly qualified doctors may be the most senior clinicians, shouldering incredible risk and responsibility whilst looking after over 100 patients on average.

‘We are firefighting, trying to keep everyone alive until the morning team arrives, which is just as poorly staffed and exhausted.

“Our working conditions are worse than ever: you’re expected to make hundreds of critical diagnostic assessments and life and death decisions, face challenging clinical situations, brush it off and continue your shift or come home to being a functional member of society.’

Vassili adds that the demand by the Government to increase productivity is ‘outrageous’.

With junior doctors suffering pay cuts of 26.1% since 2008, it has led to the loss of retention of staff, with many leaving the NHS to find work in private sectors, countries or industries.

‘There is a shortage of at least 9,000 doctors in secondary care alone,’ he explains. ‘While already working on 48-hour weekly rotas, I have had to take up extra shifts so I could pay my rent and bills, just like many of my colleagues. These relentless working conditions have an impact on mental wellbeing and the care we can provide.’

On the subject of wellbeing, perhaps the starkest news to come out of Claire’s work is ‘the stories from staff who know of colleagues taking their own lives,’ she says.

‘We have heard from NHS staff that have had colleagues brought into the ER who have taken overdoses. This leads to another level of trauma on an already traumatised, overworked workforce.

‘There are many issues within the NHS, including toxicity in the workplace, and unsafe staff-to-patient ratios that exacerbate the culture and reality of overwork for healthcare professionals,’ she goes on to explains.

‘This affects all levels of staff from Porters, HCA’s, Nurses, Doctors and consultants. There are huge staff shortages and often one healthcare assistant will be looking after 25 patients. This is incredibly unsafe for the patient and the staff alike.

‘At present, the rates of PTSD are higher than veterans returning from recent combat and this shows no signs of slowing.’

It’s a situation that is also having a huge ripple effect on the GP service, many of whom are now left unsure what will happen to those patients they have to refer to hospital.

This was the position Dr Zoe Watson, a London-based locum GP found herself in recently.

‘The whole network is impacted when there’s blockages in secondary care,’ she tells Metro.co.uk

Zoe, who is the founder of wellbeing platform Wellgood Wellbeing, adds: ‘Stories I’m hearing from my secondary care medical friends are horrific. Women giving birth on waiting room floors… patients having to be asses in supply cupboard because there’s nowhere else.’

As thousands of junior doctors in England began voting this week on whether to strike over pay in the latest outbreak of industrial unrest sweeping the country, it looks like the NHS is not on the verge of breaking, but is already broken.

According to Dr Vivek Trivedi and Dr Robert Laurenson, co-chairs of the BMA junior doctors committee, they are ready not only to fight for their patients’ lives, but their own too.

‘Junior doctors are not worth a quarter less than they were fifteen years ago, nor do they deserve to be valued so little by their own Government,’ says Dr Trivedi.

‘Pay erosion, exhaustion and despair are forcing junior doctors out of the NHS, pushing waiting lists even higher as patients suffer needlessly.

‘The Prime Minister says his door and that of the Health Secretary, are “always open”. But after more than a decade of pay cuts no offer to restore our pay has been made, and all our calls to meet, and letters to the Health Secretary and his immediate predecessors, have been ignored.

‘When we are faced with such resolute ongoing silence, and there is no agreed settlement on the table, then we are left with no choice but to act,’ adds Dr Trivedi.

‘If the Government won’t fight for our health service, then we will.’

Meanwhile, Vassili says that despite the current state of the NHS, it’s still worth fixing – and there is a way to do it.

‘It will be a long journey,’ he admits. ‘But it starts with the Government listening to unions and their members.

‘Firstly, they must halt the exodus of healthcare professionals who are leaving by stopping the pay cuts, restoring their salaries, and improving the working conditions. Secondly, they should focus on and invest in GP and community care, and then, thirdly, the Government needs to focus on workforce planning and improving training opportunities.

‘I became a doctor to make a difference in people’s lives on a day-to-day basis, and I joined the NHS because of its significance for both staff and patients,’ adds Vassili.

‘People’s lives are intrinsically linked to the NHS: they are born, live and might die within it, and many are employed by it. It is an institution we recognise, love and respect in this country, and we must fight for it.’

The 1913 Senghenydd disaster that destroyed an entire community