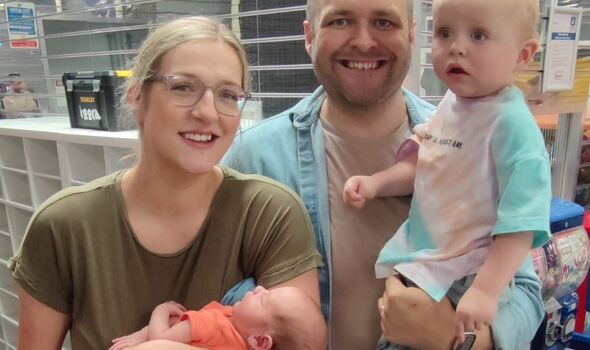 A student claims she was told she would be able to take her newborn son onto campus and into lectures and seminars.

However, Leah Foster says she was then “blindsided” by a meeting telling her that this was not the case.

She has now been suspended from the University of Derby pending the result of an investigation into her case.

Leah Foster, 35, told DerbyshireLive she is studying psychology but has been forced to put her studies on hold after the university told her she wouldn’t be welcome on campus if she insisted on bringing her son, Emmett, into class with her.

Mrs Foster, from Chesterfield, claims that went against what she had been told previously. She claims to have been told that there would be no problem with bringing Emmett. The University of Derby says that it would never exclude a student because they wish to continue studying while breastfeeding, as Mrs Foster is. However, babies and children are not allowed into teaching sessions as they may distract other students.

Mrs Foster started to take Emmett onto campus with her but a few weeks later she got an email from her tutor asking for a meeting with the head of student services. Mrs Foster said she thought the meeting, in October, which came out of the blue, was about how they could help her with bringing Emmett into class.

However, when she attended that meeting, she said she “felt a bit blindsided by some of the things they were saying because I was expecting to have an actual supportive chat but it wasn’t supportive whatsoever. They did say they’ve received complaints but I don’t see how he can be distracting in any way, if he starts to make a noise I remove myself and him from the lesson so it’s no more disruptive than someone getting up and going to the toilet.”

“They also said that some people have complained that they can’t bring their children onto campus but I said that he’s only coming with me because he’s so young and he’s breastfed. I have a two-year-old as well but he doesn’t come with me because he would be two disruptive so I have different childcare arrangements for my two-year-old son but Emmett is still too young.”

Mrs Foster says she’s received nothing but compliments about how good Emmett is when he was on campus. She also added that she’s never been told by fellow students or lecturers that Emmett has been disruptive in class.

On November 3, Mrs Foster said she received an email stating “we understand you’ve continued to bring him in despite what we told you” however, she claims she wasn’t told she couldn’t bring Emmett in.

She said: “I explicitly asked them, in that meeting, ‘are you saying the University is telling me I cannot bring Emmett onto campus’ and they didn’t say no, they gave me a wishy-washy answer and referred back to the options they’d already given me.”

Until that point, Mrs Foster says she has now been left in limbo and doesn’t even know if she can submit any of her assignments while she is under suspension. She adds that the whole situation has left her feeling stressed and angry.

She said: “There’s a lot of anxiety about how much I’ve missed, I actually miss going into campus and I miss my friends, I’m worried that I’m missing out on content in the seminars and workshops.”

In a statement to Derbyshire Live, a spokesperson for the University of Derby responded to Mrs Foster’s claims, saying: “The University has not and would never exclude a student because they wish to continue studying while breastfeeding or caring for children, or because they wished to breastfeed on any of our campuses. We have many students who are combining studying with parenthood, and support them in every way we can, including personal support plans tailored to the individual. However, we do not permit babies and children to be brought into teaching sessions, primarily because of the disruption caused to other students.

“We have received complaints from students who have struggled to concentrate on occasions where babies and children have been present. Where students wish to keep their child or baby close and continue to study, we will always work with them to find ways to best support them while being mindful of the need to ensure a good experience and suitable learning environment for all our students.

“We are very supportive of breastfeeding, have facilities on campus to support this, and our position is clearly laid out in our Student Pregnancy, Maternity and Paternity Policy.

With regards to this particular case, in line with our procedure, we reviewed Leah’s temporary suspension at the end of the two weeks and wrote to her on 7 December to invite her to a meeting to revisit all the options we have offered her that would allow us to end her suspension and further support her as a student parent, without impacting on the experience of other students and staff.”

Coronavirus: Italy deaths slow down, but cases leap to almost 6,000