Flash flooding has left a car submerged in water on the outskirts of London this evening.

Terrifying footage has been shared from the North Circular, which surrounds the central area of the capital.

A small car can be spotted sinking through the water in the clip, filmed by Shona Donald.

She says: ‘A car almost submerged on the North Circular, completely. They’ve had to smash the back window, there must have been kids in it or something.’

The road was brought to a standstill as a result of the weather conditions.

In Shona’s footage, queues of traffic can be seen behind the flooded area of the road as traffic in the opposite lane crawls past. 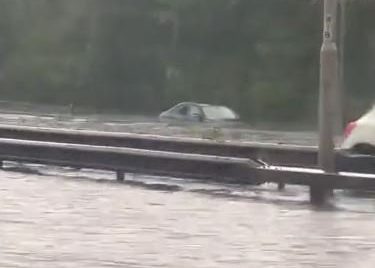 Water has been seen pouring into train stations and onto roads after thunderstorms hit London this afternoon.

This afternoon, the main entrance to Victoria station appeared to be flooding with similar conditions outside Kings Cross.

Flash floods have plagued parts of the UK following the heatwave.

The hot temperatures have meant some areas have become ‘baked by the sun’.

Dan Suri, forecaster for the Met Office, said: ‘With no meaningful rainfall in some southern locations since June, soils in these areas have become baked by the sun turning them into hard almost impenetrable surfaces.

‘Any rainfall in these areas won’t be able to soak away and instead it will wash off soils and other hard surfaces, creating flash flooding in some areas.’

Elsewhere in the country, heavy rain has flooded roads and submerged cars as storms worsen.

It follows weeks of little to no rain which have left the ground rock hard and unable to absorb water.

Andrew 'refuses to socialise with William and Charles after comeback blocked'