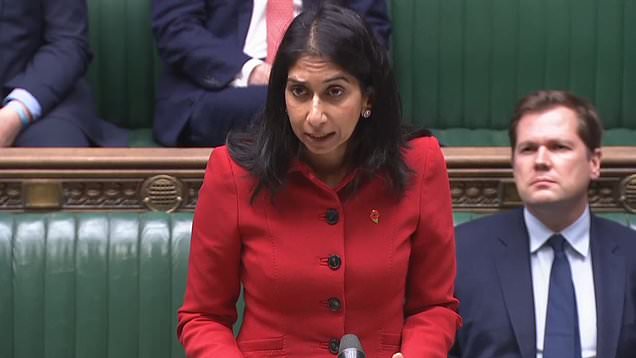 It is said in politics that if a negative story has been running for three days in a row, you need to take decisive action.

Home Secretary Suella Braverman has been dominating the headlines for almost a week now in regard to her very serious security breaches, sending confidential emails to her private Gmail address, and it shocks me that Prime Minister Rishi Sunak is doing nothing about it.

This breach was not a one-off. Braverman admitted that she sent official Government documents to her personal email address six times.

It is evident that almost everything this reappointed Home Secretary does is bad.

And it also seems evident that her way of distracting us from this is to use inflammatory language. But that is not enough to distract me and many others.

By Braverman’s own admission, she breached the ministerial code in two separate ways: first, in sending confidential documents to a backbench Tory MP and others, and second, in using her private email address for sensitive Government emails.

This isn’t a minor slip up – there is a very valid reason why security services insist on secure avenues of communication.

Astoundingly, it has been reported that Braverman told a mystery person to ‘delete and ignore’ a top-secret email.

That recipient clearly did neither, otherwise Laura Kuenssberg would not have been able to show it to the world, and an awkward Michael Gove, on her Sunday show.

The Home Secretary has now been reported to the Financial Conduct Authority by Labour, as the breach could have enabled insider training.

These were serious errors, and she was rightly forced to stand down by the former Prime Minister Liz Truss. But it is astonishing that just six days later, Sunak re-appointed her to the same job.

The Prime Minister’s judgment is called into serious question if he is willing to place someone so unreliable in such a senior role.

When taking office he talked about integrity, but his decision to reappoint Braverman makes a laughing stock of this.

Home Secretary is a serious role: one of the Great Offices of State.

The officeholder has responsibility for – among other things – the police and secret services. For this, you must use secure emails and servers.

I fear we will be in the unprecedented situation where security agencies may not trust the Home Secretary.

I served in the Labour Government under Gordon Brown, so I know the importance of information security.

Ministers are governed by the Official Secrets Act and we would receive briefings on what we can and cannot do.

This Tory Government claims to be patriotic, but there is nothing patriotic about repeated security breaches. They put our country at risk. We must never take the Tories seriously again when they claim to be the patriotic party.

Removing Braverman is the only solution – and the fact Sunak has not done so makes me question what exactly she has over him.

Is Sunak’s reluctance to act a direct consequence of Braverman’s key endorsement of him in the Tory leadership race?

It’s the kind naked ambition of the self-centred Tories that was also highlighted when Jacob Rees-Mogg, who is on the right of the Tory Party and famously once called Rishi Sunak a socialist, seemed to be angling to keep his job in cabinet – but when it became clear that he wasn’t going to get one, he wrote a reluctant letter of resignation.

I’ve said it time and time again – the Conservative Party always puts itself before the country’s interests.

And let’s not forget who we’re dealing with in Braverman.

This is the Home Secretary who famously said that it was her ‘dream’ to deport people to Rwanda. In her latest address to the House on migration, she used inflammatory language that invoked strong negative feelings, referring to arrivals as being part of an ‘invasion.’

The lack of outcry from her own side was galling – we need to remember how important it is to not tolerate wrongful behaviour and to call it out.

This behaviour is symptomatic of this cruel, heartless Government and shows the type of people Sunak surrounds himself with.

The fact Sunak chose Kemi Badenoch as the Equalities Minister gives a clear indication of how the rights of LGBTQ+ people are not a priority for this Government. She has already misrepresented the editor of Pink News on the floor of the House using her parliamentary privilege.

So, while the Tories protect Suella Braverman, I am clear that actions have consequences. Braverman’s mistakes were serious, reckless and irresponsible, and her attempts to distract with inflammatory language even more so.

Any Prime Minister who cares about the national interest would sack her.

If Rishi Sunak cannot see it, he will be tarnished by association and will fall victim to the same embarrassing forced U-turns that his predecessors suffered.

Braverman’s position is clearly untenable. The question now is whether Sunak will take responsibility and do the right thing and remove her, or will he allow her to continue to try and divert attention with dehumanising language?

Immigration from outside EU now at record high after Brexit