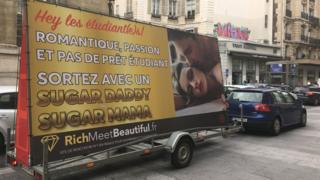 The Norwegian businessman behind a “millionaire dating” site has been handed a six-month suspended sentence for promoting prostitution.

A court in Belgium handed the sentence to Sigurd Vedal, the investor behind RichMeetBeautiful, which connects wealthy older men to young women.

The site caused a scandal in 2017 after advertising “sugar daddies” to Belgian university students.

Mobile billboards from the company toured areas near the Free University of Brussels campus encouraging students to register for the service for financial gain.

Alongside sexualised imagery, the ads invited students to “improve your lifestyle” or have a “zero euro student loan” by dating a “sugar daddy” – a term for older wealthy men interested in meeting younger women.

Similar adverts caused uproar in France where they advertised “romance, passion and no student loan”. Mr Vedal is also accused of “aggravated pimping” in that country.

In the Belgian case, the university complained to police, who seized the billboards and later charged Mr Vedal with “incitement to debauchery and prostitution”.

He maintained that he and his company were only trying to facilitate unusual dating.

In April, as the trial was underway, he told the court that he would not mind his daughter registering on the site “if she wants it and she wants it because she wants to start a real relationship”, according to Belgian newspaper De Standaard.

Prosecutors, however, said the site’s purpose was clear.

“Even if weasel words were used, everyone knew what it was about,” the state prosecutor told the court. “There are half-dressed women on the site, there are no photos of couples in a restaurant.”

“Students are reduced to sex objects that must undress for money.”

The Belgian version of RichMeetBeautiful has been blocked from within the country while the case has been ongoing, and the court ordered the website to remain closed.

It continues to operate in many countries in Europe, Asia, and the US.

The site claims to help people “find your perfect match for a relationship based on love, respect, passion and intellect” – and now features a green tick mark on the homepage next to the words “no sugar dating”.

‘What is wrong with this family?’ Owen Jones erupts at Prince Charles over quirky habit