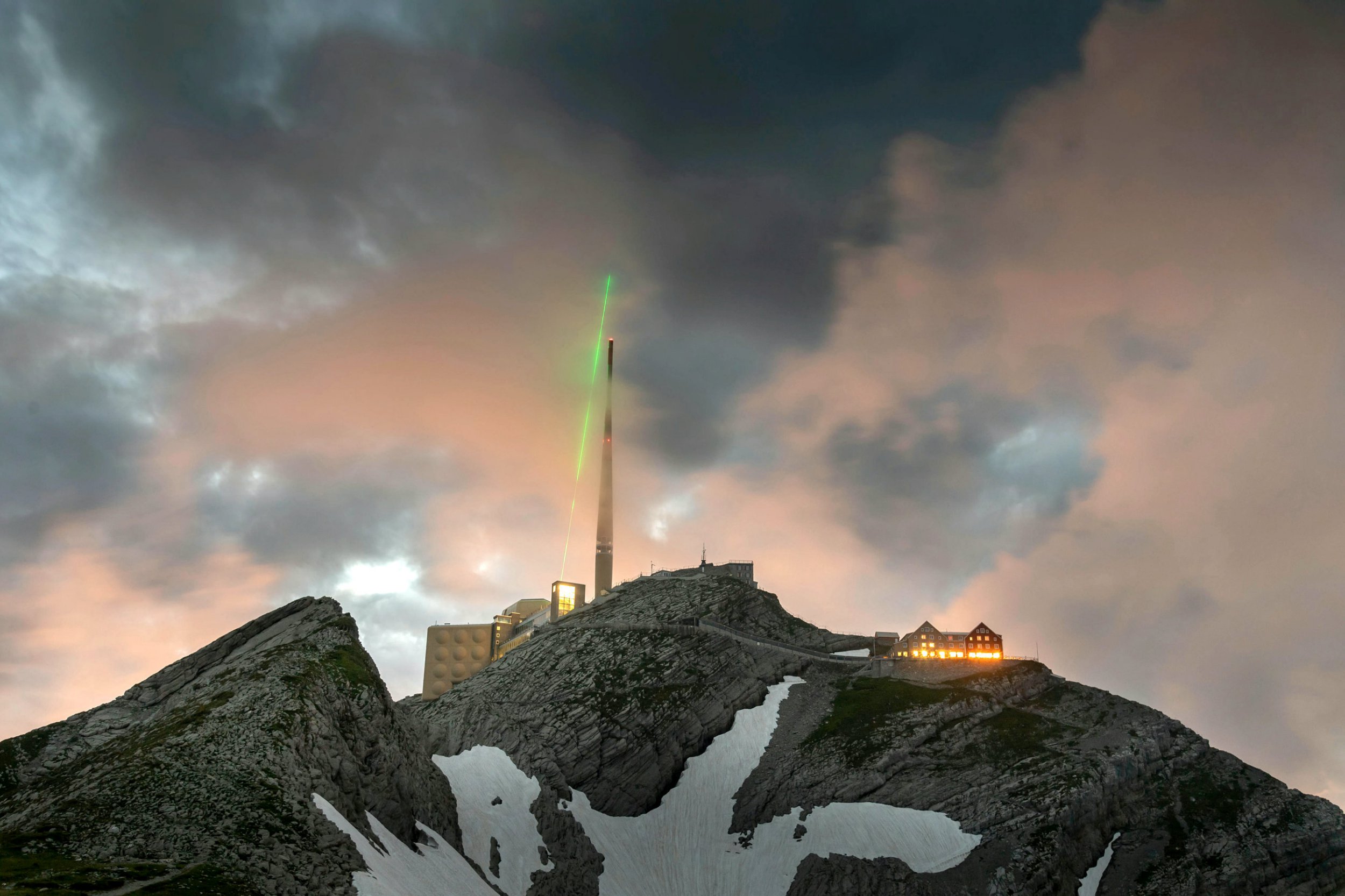 Lightning has been diverted – using a weather-controlling ‘super laser’ that could provide a defence at key infrastructure sites.

The lightning bolts were guided from thunderclouds to places where they won’t cause damage. Scientists say the new technique could protect power stations, airports, launchpads and other buildings from disaster.

The laser creates a virtual lightning rod mimicking metal conductors that intercept flashes and guide their currents into the groand.

Dr Aurelien Houard, of The Polytechnic Institute of Paris, said: ‘The findings extend the current understanding of laser physics in the atmosphere and may aid in the development of novel lightning protection strategies.’

The five tonne device is about the size of a large car – and fires up to a thousand pulses per second. It was installed near a telecommunications tower in the Swiss Alps – which is struck by lightning around 100 times a year.

Dr Houard said: ‘A powerful laser aimed at the sky can create a virtual lightning rod and divert the path of lightning strikes.

‘The findings may pave the way for better lightning protection methods for critical infrastructure.’

Lightning rods were invented by Benjamin Franklin in 1752 as part of his groundbreaking exploration of electricity – and are still used today.

But installing them is often unfeasible. They only combat the direct effects – and can cause electromagnetic interference and voltage surges in devices and appliances.

Dr Houard said: ‘Acting as a virtual, movable rod, a laser beam directed at the sky could offer an alternative.’

The idea of using intense laser pulses to guide lightning strikes has been previously explored in laboratory conditions. However, no field result previously exists that experimentally demonstrates lightning guiding by lasers.

Dr Houard and colleagues carried out a series of experiments last summer on the top of Mount Santis in northeastern Switzerland.

In six hours of operation during thunderstorms they observed the laser diverted the course of four upward lightning discharges from the 400ft tall tower.

Results were corroborated using high-frequency electromagnetic waves generated by the lightning to locate the strikes.

‘One of the strikes was directly recorded by high-speed cameras and shown to follow the laser path for over 50 metres.’

The trillion-Watt laser is the first of its kind – and one of the most powerful in its class. It works by generating a long ionised channel called a laser filament towards the clouds.

It acts as a preferential path for the lightning – deviating it away from vulnerable sites.

Co-author Dr Clemens Herkommer, of Trumpf Scientific Lasers in Unterfohring, Germany, said: ‘By shooting a thousand laser pulses a second into the clouds we can safely discharge the lightning and make the world a little bit safer.’

Market mayhem as FTSE 100 drops after Truss insists no cuts