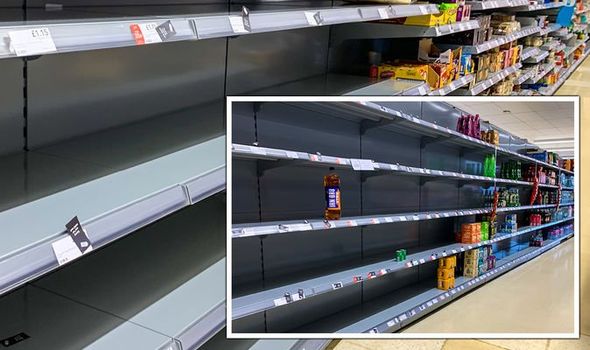 A RECORD number of people were told to self-isolate by the NHS COVID-19 app last week, sparking fears of a “pingdemic” crisis in UK supermarkets.

Many of those “pinged” by the app were key workers leaving supermarket shelves empty as several businesses have reported staff shortages.

This month’s new figures have shown that 618,903 alerts were sent to users in England and Wales.

The Government is due to reveal a list of key industries where workers will be exempt from self-isolation rules, if they have been double vaccinated.

The increase of people being notified of COVID-19 contact is up by 15 percent on the previous week, when 520,194 notifications were sent out.

Since then, cases have increased by 40 percent which should have led to a steeper rise in alerts.

Many workers have chosen to delete the app or turn off contact tracing so that they can continue to work.

Kwasi Kwarteng, the Business Secretary said: “We’re looking at different sectors and we will be publishing today the sectors that will be affected.

He said he would not pre-empt the list when asked if the food industry would be on it.

Data from Make UK shows more than one in seven manufacturing firms have stopped production because too many workers are having to self-isolate.

Staff who are told to self-isolate will be allowed to carry on working and take daily tests instead once the Government allows.

Ian Wright told Sky News: ‘I think the situation is concerning and it’s up and down the supply chain

“It’s not consistent across the country – there are some places where shops and factories are working perfectly normally and in other parts manufacturers are under extreme pressure to continue producing because they may have up to 25 percent of their staff off.”

That is a 33 percent increase on the week before and the highest number since January 20.

Supermarkets have urged customers not to panic buy in response to reports of emptying shelves, saying they are continuing to receive regular deliveries.

The UK’s biggest supermarkets described any shortages as “patchy” across stores but said there was no need for customers to change their shopping habits.

They said any gaps on the shelves were temporary as they awaited deliveries, and were occurring in pockets rather than across supply chains.

The “pingdemic”, the shortage of HGV drivers and the hot weather were all contributing to delivery glitches, grocers said, while stressing to consumers that panic buying would create a problem that did not exist.

Figures reveal how many people have virus antibodies in your region