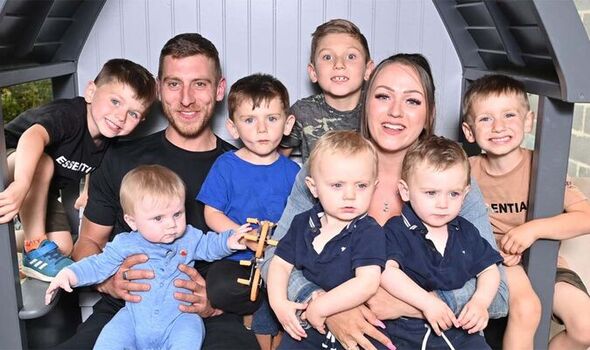 Jo-anne Ellis, 30, who has two pairs of twin boys already, gets through 175 ­nappies a week and does three loads of laundry each day. However, the mum-of-seven cherishes every hectic moment of her life.

After having an ovary removed ten years ago, Jo-anne and her partner Charles, 31, were warned she was unlikely to be able to have children, the Mirror reports. Yet, the nursery worker always dreamed of having a big family – and that dream has become a reality.

Speaking about her children, Jo-anne says she has: Charlie, 7, Riley and Lucas, 4, Joey, 3, Freddie and Ryder, 18 months, and eight-month-old Mikey.

Commenting on the fact Jo-anne wishes to have more children, she said: “People think I’m holding out for a girl but I’m honestly not. I love being a mum to so many boys… I can’t see myself with a girl!”

She explained that after having Charlie she got pregnant with another boy, Thomas, who she ­tragically lost at 36 weeks. ­

When she got pregnant for the third time, she discovered she was carrying twins. She later got another double helping with Freddie and Ryder – who were just three weeks old when she fell pregnant with Mikey. 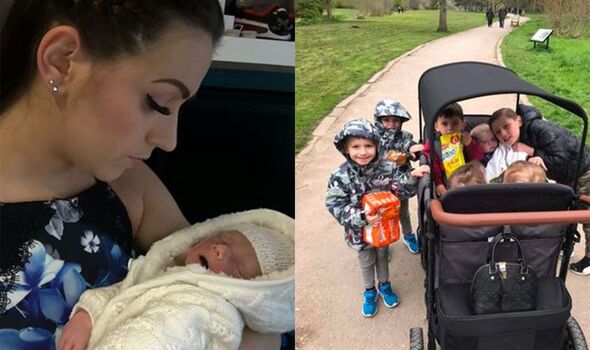 “Because it was lockdown and we weren’t seeing anyone, we decided to keep the fact we were having twins a secret from everyone,” said Jo-anne. “It was so hard, but worth it to see the look on their faces.

“We told my mum in a similar way to Monica and Chandler in Friends – Charles walked in carrying one of the twins and said, ‘Here’s your grandson’. Then, a few minutes later I walked through the door with the other baby!”

The twins were just months old when Jo-anne became pregnant with Mikey – and the tiny age gap means people often assume the youngest three are triplets.

“My dad is one of nine and I have loads of cousins,” she said. “I never imagined I’d have two sets of twins – but I consider myself doubly blessed.

“We get stopped a lot by strangers. People often ask how I do it. But I actually find having twins easier than singletons – both sets have a wonderful bond. Because they always have someone to play with, I actually have time to fold clothes, put the washing away and cook.”

While many parents dread the summer holidays, Jo-anne loves it. This year, the family will be taking a ferry from Dover and driving to the south of France in their 10-seater Ford Transit custom van.

Jo-anne said: “I love family holidays with the kids and I don’t find it stressful travelling with them. They have their moments, of course, but I make sure they are entertained with activity packs. We can’t take them on a plane as each child under two requires an adult lap.”

Jo-anne, who is still on maternity leave, says the key to a happy family life is being organised. Her day starts at 6am with two sittings for breakfast. She then uses a wagon to take the youngest four on the school run while the older ones walk.

While Charles – who works in distribution – is out of the house during the day, Jo-anne looks after Mikey and does the housework before the 3pm school run.

She said: “I give the older children an early dinner and run them a bath, then around 6pm I pick up the younger ones from nursery and get them fed and bathed too. I do bathing in two rounds – the four little ones all go in the bath together, as do the older ones. I try and get everyone to sleep at around 7pm or 8pm. The oldest twins share a room with Charlie, and Riley, Freddie and Joey also share a room. They love it and often curl up in one bed!” 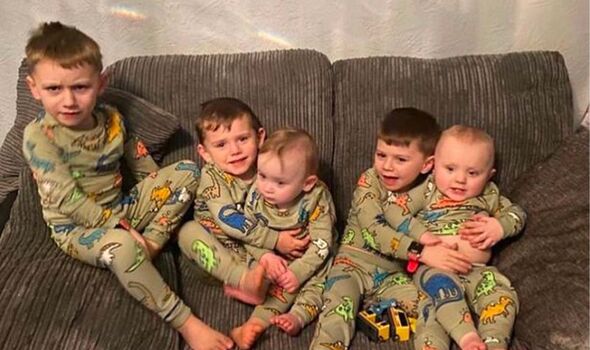 Monday is Jo-anne’s food shop day and she bulk-buys everything at Costco.

“The wagon is a lifesaver,” she said. “I go shopping with the youngest four – I push the trolley with one hand and pull the wagon with the other. It always takes a while – not least because we always get stopped by people asking questions. We get a lot of very funny looks. People often assume I’m a childminder.”

Jo-anne, from Baildon, West Yorks, used to spend £300 on the monthly shop and £80 a week on top-ups but this has increased to £450 a month and £130 in top-ups due to the cost-of-living crisis. She also batch-cooks family favourites such as spaghetti bolognese, chicken curry and shepherd’s pie and on Sundays, everyone sits down to eat a roast together.

Jo-anne, who admits the family home is often “hectic”, said: “Sometimes I think, ‘I can’t wait till bedtime’, but then it’s so boring. There will be plenty of ‘me’ time when they leave home.”

The children are especially precious to Jo-anne and Charles, who has an older son from a previous relationship, because of losing Thomas in 2015.

Jo-anne suffered a placenta abruption at 36 weeks and woke up in intensive care to learn that her unborn child had died.

“Time passes so quickly,” she said. “I want to treasure these moments.”