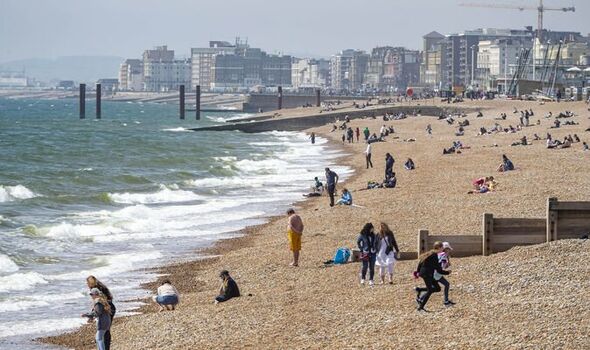 The weather is helping the boom, with temperatures due to soar towards 80F (27C) next weekend. Staycation spending is expected to give Chancellor Rishi Sunak’s budget a summer economic boost. Graham Donoghue, chief executive of Sykes Holiday Cottages, said: “We’ve seen more Brits than ever make last-minute summer staycation bookings, with bookings over the last two weeks up 22 percent on the same period last year.

“This is at least in part due to widespread reports of overseas travel disruption – travellers simply don’t want to have to tackle airports and take the risk that their family holidays could be cancelled.

“A UK break also offers an opportunity to save a significant amount of money compared to what you would end up spending by going abroad. With increased pressure on household budgets, it’s little surprise more families are considering holidaying at home.”

Lettings firm Finest Retreats had an 88 percent rise in half-term bookings made within seven days of arrival this year on 2021 while volumes at Landal GreenParks holiday villages have increased 38 percent on the previous fortnight.

Camping outfit Feather Down Farms said June bookings are up 75 percent on 2019, likely due to “awful images of airport queues and stories of flight cancellations”.

Independent Cottages had an 80 percent rise in enquiries in the last 30 days via its “last minute” page.

Sean Thompson, head of marketing at the self-catering specialist, said: “This may suggest that people were waiting to see how things unfolded for half term and subsequently, when they saw chaos, quickly researched and booked UK destinations. We may be seeing a continuation of this trend… with more people looking to opt for the safer bet by booking a staycation.”

A spokeswoman for The Coniston Hotel Country Estate and Spa in Skipton, North Yorks said: “Up to 20 percent of bookings made are for the next, or even the same, day which could be due to ongoing travel disruption.”

Matt Fox, chief executive of holiday rental firm Snaptrip, said prices for summer staycations would not remain low for long: “The initial surge in international bookings caused a drop in demand for domestic travel …bringing prices down as supply over the summer is still relatively strong.”

He added: “As forecast demand continues to increase, and supply will fall as a result, we can expect that to be reflected in prices over the coming weeks.”

The most sought-after UK destination online is Blackpool, while Google searches for “UK holiday destinations” and “UK holidays” are up 23 percent year-on-year and 14 percent higher than in May. Overall demand online is just six percent short of summer 2020 levels – when Britons were not allowed to holiday abroad due to pandemic restrictions.

A spokeswoman for family-owned holiday park group Haulfryn said: “We are expecting to see the demand continue to rise in the coming weeks.

“This will likely be an effect of not just the travel disruptions but the school holidays, which always causes a spike in bookings.” Robert Owen, director of marketing at Blackpool Pleasure Beach, said Britons have realised there is so much to do in the UK.

He said: “It’s such a shame to see so many holiday plans ruined amid the airport chaos,” adding “it really does go to show how amazing staycations can be – you don’t have to worry about cancelled flights or long delays.

“While it may have taken a worldwide pandemic for Brits to recognise the perks of holidaying in the UK, it’s great to see.”

Campervan rental firm Camplify has felt a record rise in demand, with one in nine booking requests made by first-time hirers. The most popular destinations on the platform include Wales, Cornwall and Scotland.

Forecasters last night said that Britons can also look forward to a sizzling summer with highs of at least 79F (26C) expected in some parts of the UK by next Friday.

The Met Office said that temperatures will hover around June’s average of 68F (20C) in the north of England while often feeling warm further south – with hot conditions in the South-east for a time.

Staycations putting more money into the coffers of UK businesses will be a welcome boost to the Covid-battered domestic economy.

Britain is poised for the weakest economic growth in the developed world next year, according to a warning from officials at the Organisation for Economic Co-operation and Development.

Aviation industry bosses have called on the Government to introduce an emergency visa to let workers from the European Union enter the UK in order to help alleviate the travel mayhem.

Transport Secretary Grant Shapps said airline job cuts during the pandemic had been “too deep”, despite the Government furlough scheme.

Several airports have begun recruitment drives to fill hundreds of vacancies. Flights have been axed every day, sometimes just before take-off, because of staff shortages in various aviation roles.

Mr Shapps has rejected demands to open the door to “cheaper” overseas workers to fill the vacancies.

He said: “The answer can’t always be to reach for the lever marked ‘more immigration’.”

I’ve worked in hospitality for 20 years, but I had never seen such a rush of staycation bookings as last summer.

This year, demand has been consistent and we are expecting another strong season ahead.

We anticipate a surge of people deciding that a British summer holiday may well be preferable to potential airport problems, with flights and long queues.

It’s great to see that city-centre UK hotels are enjoying increased demand; cultural options such as world-class museums, art galleries, and theatre productions, plus superb shopping, are a big pull for families and couples alike.

It’s clear to me that the pandemic also reminded people of the beautiful British landscapes and how much this country offers to visitors.

All told, staycations have given a boost to UK tourism and we hope very much that this trend continues.

We particularly welcome the longer-length hotel staycations, that give our colleagues the opportunity to get to know guests’ preferences, and to deliver that extra something special. This gives our expert teams a real buzz of professional delight.

Hoteliers are of course challenged with staff shortages and having to manage massively rising costs, especially related to energy.

The increased demand and extra business is therefore a much-needed equaliser to balance these costs.

Our varied properties bring a plethora of experiences to life.

We have inspiring destinations, glorious gardens, elegant retreats and so many heritage escapes – plus superb restaurants and, often, tempting spa options.

These historic properties offer grandeur along with comfort and space, both indoors and out.

It’s an upmarket home-from-home experience, but with the cosseting that comes with experienced staff who know just what their guests seek.

• Kalinda Juneja is CEO at Pride of Britain Hotels

No room to breathe in crammed terminals by Steph Spyro

Holidaymakers hoping to get away yesterday said they were crammed into airport terminals with “no room to breathe”.

Passengers at Bristol Airport described queues stretching outside the doors.

William Stone, who was flying from Bristol to Menorca with Jet2, said there were “far too many people in the airport’s terminal”.

He added: “The amount of people in the airport this morning was completely ridiculous. No room to breathe! Baggage drop was out the terminal door.”

Passenger Danny Harris called it the “worst experience ever”. Traveller Gary Cooper compared the airport to being “like a zoo”. The airport, which has launched a recruitment drive to fill 150 vacancies, apologised and said its service “fell short” yesterday.

Airports across Britain have issued apologies in recent weeks as they struggle with winding queues at check-in, baggage collection and security.

The main delays happen before 6am.

Flight cancellations have also contributed to the chaos, with easyJet axing another 72 flights yesterday. Most of the cancellations are to and from the airline’s main base, London Gatwick.

Britain’s biggest budget airline is currently cancelling around 30 flights a day on average at a few days’ notice because of staff shortages. British Airways is cancelling more than 100 European departures each day but passengers are being warned weeks in advance. Other airlines have cancelled flights just hours before take-off.

All passengers whose flights are cancelled are entitled to new flights on the original day of departure if a seat is available, even if it is on a rival airline.

Rory Boland, editor of Which? Travel, said: “If a flight is cancelled, airlines must offer compensation where applicable and the option of rerouting with a rival carrier, if necessary.

“The Government and Civil Aviation Authority must intervene where airlines are ignoring their legal obligations.”