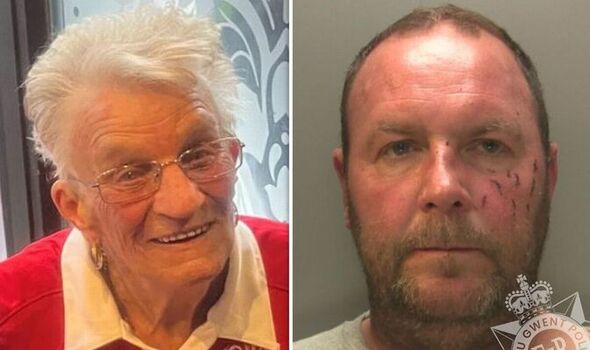 A great-grandmother was strangled to death in her bed and sexually assaulted by her son-in-law after a row over cigarettes.

Simon Parks, 52, later told a neighbour the victim, 79-year-old Mari O’Flynn, was “a horrible b******” who had wound him up. A court heard O’Flynn’s body was found, partially unclothed with bruises on her face and neck, at her home on May 24.

Parks had killed the frail pensioner and sexually assaulted her, but it is not known whether the assault took place before or after her death.

Cardiff Crown Court heard the thug murdered Ms O’Flynn after he became resentful of her when she moved in with him and his partner Claire O’Flynn, the deceased’s daughter.

But Parks, an alcoholic, was sentenced to life imprisonment with a minimum of 25 years.

Sentencing, the Recorder of Cardiff Judge Tracey Lloyd-Clarke said: “You assaulted her both physically and sexually and strangled her until she was dead. She fought for her life, biting you and scratching your face until you bled…. You left Mrs O’Flynn lying dead in her own bed… You have caused life long trauma and interminable grief to Mrs O’Flynn’s family.”

Parks and Claire O’Flynn had been in a relationship for 14 years when Mari O’Flynn returned from living in Greece following the death of her husband Morris in 2017, reports Wales Online.

Parks had made a number of threats to Mrs O’Flynn and had previously threatened her with a knife during an argument.

And when Mrs O’Flynn moved in with Claire and Parks in 2021, the defendant left the home in Newport, south Wales, and stayed with friends due to his intense dislike for her.

Less than a year after the victim moved into the home, Parks strangled her after she refused to give him cigarettes.

Michael Jones KC, prosecuting, said: “Mari O’Flynn was a vulnerable, frail 79-year-old lady who was, on May 24, murdered in her bed by the defendant, who had consumed alcohol by the time he killed her. He harboured resentment and anger towards Mrs O’Flynn because she had moved in with his partner.”

Although Parks had embarked on rehabilitation treatments, he discharged himself and carried on drinking. He was taken to hospital just days before Mrs O’Flynn’s murder but refused to be seen by health professionals.

The relationship between Parks and Mrs O’Flynn was fraught, with the victim often anxious and afraid to be in the same house as the defendant.

Despite this, he regularly asked her for money and cigarettes.

On the morning of May 24, Parks was described as “normal”, “calm” and “sober”. Claire O’Flynn left for work at 5.45am and dropped Parks at a shop, where he purchased eight cans of Kronenbourg. He returned to the shop 20 minutes later when he bought four more cans and cigarettes.

The defendant was then seen on CCTV walking back to the home, wearing a black jacket and jeans and carrying a plastic bag. At around 8am, he entered the house where his partner and Mrs O’Flynn lived and attacked her, murdered her and sexually assaulted her.

At 9.25am, Parks left Leach Road wearing a pale blue short sleeved shirt and jeans, carrying a white tissue which he used to dab his face. He went to the Spar store in Bettws at 9.36am where he bought six cans of Kronenbourg and a bottle of whiskey.

He was given fresh tissue by the shopkeeper for bloody injuries to his face. He proceeded to sit on a bench and drink the alcohol he had bought until he was sick and passed out.

An ambulance was called and he was taken to the Grange University Hospital in Cwmbran at around 11am.

Again, Parks refused treatment and told hospital staff “I am absolutely fine, I just want to go home. My partner will go mental if I’m not there when she gets home”.

The defendant took a taxi back to Leach Road at 12.34am. After a brief walk to the Spar to purchase more cigarettes, having changed clothes a second time, Parks returned to the house and spoke to neighbour Paul Baston at 1.43pm.

Speaking to Mr Baston, Parks said: “I have done it now, I’ve killed her.” When asked why he had done this, he responded: “Fags, I didn’t have any cigarettes and I asked her for some and she wouldn’t give me any. She wound me up so I strangled her.”

Mr Baston went to the bedroom and discovered Mrs O’Flynn lying in partially naked. He put a quilt over her and checked her pulse. Parks asked him if she was dead, to which he replied “I believe so.” The defendant said: “I have had it now haven’t I?”

The police and paramedics were called and arrived at the house minutes later. Parks was arrested and placed in handcuffs while paramedics attended to Mrs O’Flynn but she was pronounced dead at 2.09pm.

When Parks was arrested, he told police: “I ended up strangling my would be mother-in-law over nothing… We had been living together 14 years fine and she turns up…. The most horrible b****** you have literally met in your life…. I’m not going to be able to live with myself after this.”

A post mortem revealed the victim had suffered blunt force injuries to her head and neck, in keeping with an assault and the application of sustained forceful pressure to the neck. It was also revealed that Mrs O’Flynn had been sexually assaulted, with Parks’ DNA discovered on intimate areas of her body. Forensic scientists were unable to ascertain whether she had been sexually assaulted before or after her death.

Parks was examined and police found fresh wounds to his face, which appeared to be scram or gouge marks, as well as bite marks to his shoulder. He refused to provide swab samples from his penis and genitals when this was requested. The defendant, of no fixed abode, later pleaded guilty to murder at a court hearing in October. He was of previous good character.

She was also described as a “sweet old lady” and “the type of person you’d want to be your nan”. She had a number of ailments including chronic obstructive pulmonary disease.

In a victim personal statement read out to the court, Mrs O’Flynn’s youngest daughter Sarah Taylor said it had been “unbearable” to think about the manner of her death. She added: “Knowing Simon Parks has taken our mother’s life was too much to bear and thoughts overwhelms my mind constantly. We were informed (the defendant) had sexually assaulted my mother, I didn’t think it could get any worse but the thought of this was tortuous.

“Simon Parks was my sister’s partner. It make me sick to my core he abused their trust, my mother was so tiny compared to him and was totally defenceless. I cannot sleep and constantly wonder what happened that night, why did he do it? I can’t stop thinking about what she must have gone through and the pain she must have been in….

“(The defendant) has never told us why he killed he and not provided any explanation or account. We want to know why and what happened to drive him to carry out these awful attacks…. I hope he stays awake at night and his actions torment him as they do us.”

David Elias KC, prosecuting, said his client accepts there was a sexual element to the murder but he had no recollection of this. He said at the time of the murder, Parks’ life had “spiralled out of control” and he was addicted to alcohol. He said the defendant had told a psychiatrist he was “ashamed” of what he had done, was “shocked” and said “I can’t believe it”.