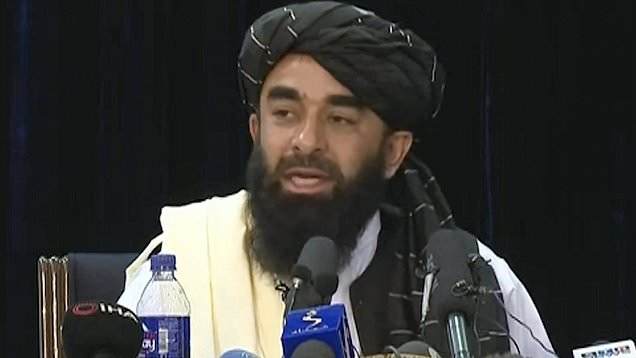 The Taliban has vowed not to ‘hold any grudges’ or ‘revenge anybody’ as it claimed to want no more war during its first press conference in Kabul.

It comes after the Taliban seized power in Afghanistan two weeks before the US was set to complete the withdrawal of its troops following a costly two-decade war.

The insurgents stormed across the country, capturing all major cities in a matter of days, as Afghan security forces and its allies melted away.

Earlier, the Taliban declared an ‘amnesty’ across Afghanistan and urged women to join their government Tuesday.

Taliban spokesman Zabihullah Mujahid told reporters gathered in Kabul that the group had ‘emancipated our country and made it independent again’ after ’20 years of struggle’.

He said ‘freedom and independence-seeking is the legitimate right of every nation’ adding: ‘This was our right and we achieved this right and we would like to express our gratitude to almighty god to bringing us to this stage.’

Mujahid has been a shadowy figure for years, issuing statements on behalf of the militants.

He said the group ‘is not going to revenge anybody’ and has no ‘grudges against anybody’.

He added: ‘We have pardoned anyone, all those who have fought against us. We don’t want to repeat any conflict, any war, again, and we want to do away with the factors for conflict.

Therefore, the Islamic Emirate does not have any kind of hostility or animosity with anyone, animosities have come to an end, and we would like to live peacefully.

Many Afghans have expressed fear that the Taliban will return the country the brutal rule they used when last in charge, and foreign officials have said they will wait to see if the insurgents make good on their promises.

In a press conference held an hour earlier over at the Pentagon, senior US military officials said commanders on the ground in Kabul have held talks with the Taliban ‘at the local level’.

Western powers are scrambling to evacuate residents and Afghan citizens after the insurgents’ lightning-quick takeover.

John Kirby, assistant to the secretary of defence for public affairs, said: ‘We are processing American citizens to get out. Thus far and it’s early on the results are speaking for themselves.

‘Our commanders in the operation have had communication with Taliban leaders.’

General William ‘Hank’ Taylor added that there has been ‘no hostile interaction’ with the militant group at the airport.

He said the priority was to get personnel out of Afghanistan ‘as quickly and as safely as possible’.

Mr Kirby told reporters the US believes it can transport between 5,000 and 9,000 people out of Kabul per day.

Pregnant mum-of-four, 39, who died along with unborn baby in crash is named