Tim Martin calls for indoor hospitality to be brought forward

Chaos erupted after a massive brawl broke at a Wetherspoon’s in Scunthorpe, Lincolnshire on Friday. Humberside Police were called to calm the situation down but were then assaulted by a group of punters. A video from the scene shows police grappling with a group on the floor as they desperately try and restrain a man and a woman. But others joined in to try and pull the police off. Coppers can then be seen drawing their tasers at the assailants and dousing one man with pepper spray during the fracas. Order was restored after tens of police officers piled into the pub to bring an end to the Bank Holiday carnage.

The fight erupted at the Blue Bell Inn pub in Scunthorpe.

In the video officers can be heard shouting “stay down”, “calm down” and “get back!”.

Police can then be seen being assaulted by one gentlemen who tackles an officer to the floor.

A grappling match ensues as the bar decends into bedlam as coppers furiosly try to control the man. 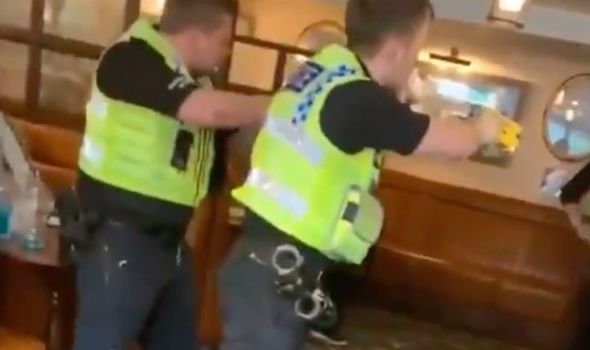 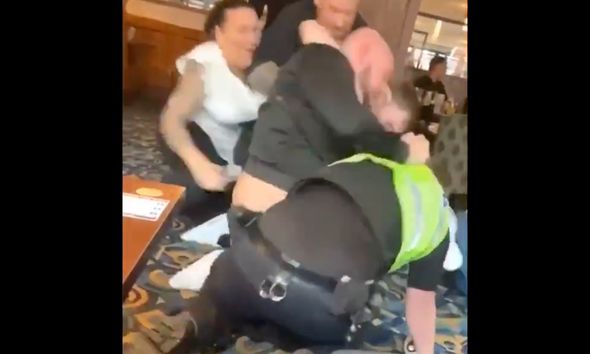 Kids can be heard screaming as the punters descend into a fierce fist fight with coppers on the floor.

And at one point a woman jumps ontop of a police officer and starts punching him as he tries to restrain a gentleman.

Portsmouth: Man pretends to be a bouncer outside Wetherspoons 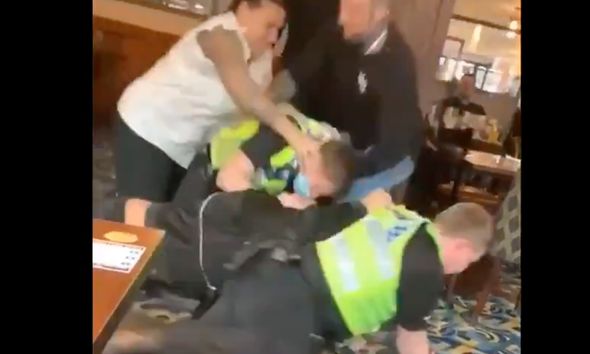 Up to ten officers then arrive to restore the order as Humberside Police report that four police officers and a staff member were ‘reportedly assaulted by a group of men’.

Two officers were then taken to hospital to be treated for their injuries as a number of people were questioned by police over the brawl. 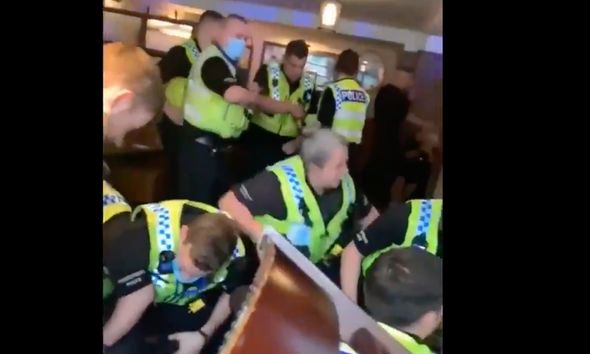 A Humberside Police spokesman told MailOnline: ‘At 5.20pm on Friday May 28, police were called to reports of a disturbance at a pub on Oswold Road in Scunthorpe.

“On arrival at the scene, four police officers and a member of staff were reportedly assaulted by a group of men. Two of the officers required hospital treatment for their injuries.

“Our first response will always be to engage with drinkers, however please be assured that we will swiftly and robustly deal with any cases of disorder – and we certainly will not tolerate abuse and violence directed at our officers or at hospitality staff.

“A number of people have been questioned in relation to the incident and have subsequently been released as we continue our enquiries.”

COVID-19: ‘You are literally fighting for your breath’ – Inside intensive care unit battling deadly second wave