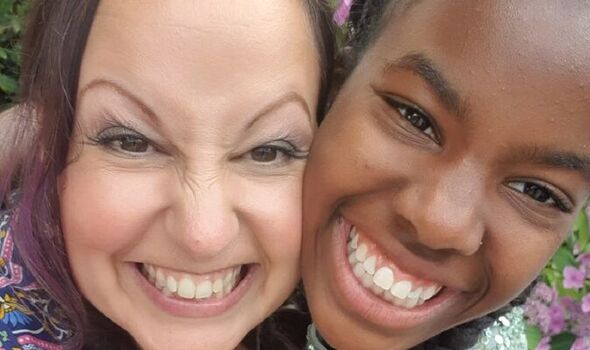 As a judge approved Sarah Kneller becoming Angel-Joy Darko’s legal guardian, he referred to the Roald Dahl novel. Eight-year-old Angel had lost her dad then her mum but Sarah, 42, was desperate to stop her being taken into care or being sent to distant relatives she did not know in Ghana.

She said the judge likened the outcome to Dahl’s story of a little girl without parents who goes to live with her kind teacher, which led to two hit films and a West End show.

Sarah added he “said that I was like Miss Honey and Angel was like Matilda. Obviously, he knew Angel had a very different background but that it was a very similar story.

“There were lots of questions over whether it would be right as I was still her headteacher and she would be coming into school and growing up at home with me.

“She was quite excited about it. She’s bubbly, lively and hilarious. Despite all that she’s been through, she always has a smile.”

Angel’s security guard dad Kennedy died of a heart attack when she was four, leaving her and mum Agnes sleeping on a friend’s sofa. Agnes was later diagnosed with cancer and died within two years.

Sarah – head of Summerswood primary in Borehamwood, Herts – had supported Angel through her mother’s illness, even helping plan the funeral. She said: “We’d always had a good relationship. Due to what was happening with her mum, she needed more care at school than we would generally give.

“I asked the social services team to come to me if there was nowhere for her to go because I didn’t want her to be a child in care forever. There was talk of her going to live in Ghana but she was born in the UK and has lived her whole life here.

“She has only been to Ghana once and that was to her dad’s funeral. It’s been a terrible time for Angel but now we have become our own family, bringing in as many people as we can.

“I’ve never been a parent before. I was thrown into the deep end with an eight-yearold. I’m super proud of her.”

Angel, who has moved on to high school, was given a Joshua Ribera Achievement Award for courage and determination. They were set up by his mother Alison Cope after the rising star grime musician was stabbed to death at a Birmingham club in 2013, aged 18.

COVID-19: More than 1.6 million people to be invited for booster vaccine