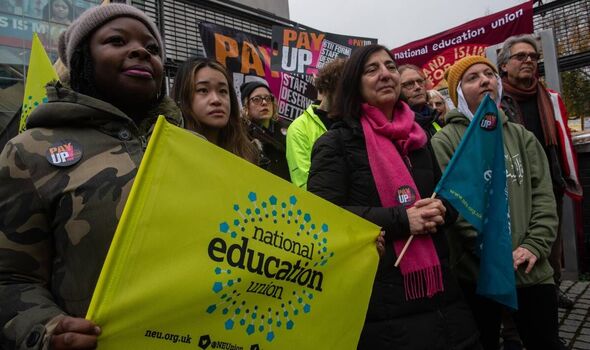 The 45,000-member-strong National Education Union (NEU) is planning several days of walkouts, from early February to mid-March. NEU secretary-general Kevin Courtney has said that action taken by its members alone would be enough to cause many school closures on strike days, prompting the most widespread school shutdown for many years.

The results of strike action ballots from other teaching unions, including the NASUWT and headteachers’ union NAHT, are also expected in the coming days. The NEU expects to announce its own verdict on January 16.

Mr Courtney said he was confident that the ballot would swing in favour of industrial action but admitted being uncertain as to whether the threshold for strikes to take place would be met.

Current legislation requires union ballots to attract a turnout of at least 50 percent, with strikes needing to be supported by 40 percent of all members.

In the event of a vote for strike action, Mr Courtney said: “We will call on members in all schools in England and Wales to strike, many would have to close.”

The NEU is demanding a 12 percent pay rise for its members, a far cry from the five percent offered to teachers by the Government.

Mr Courtney said there was still time for the Government to “put money on the table” and potentially suspend the strikes to make way for negotiations.

The Department for Education (DfE) has invited union leaders to meet with ministers this Monday to have “honest conversations about what is responsible and what is affordable for our country when it comes to pay”.

But it remains adamant that “strike action is simply not a reasonable solution”.

A DfE spokesperson said: “There are no great schools without great teachers which is why we are making the highest pay awards in a generation – five percent for experienced teachers and more for those early in their careers, including an 8.9 percent increase to starting salary.

“We are also investing an additional £2bn in schools next year and £2bn the year after, taking school funding to its highest ever level.

“After two years of disrupted education for young people, strike action is simply not a reasonable solution.”

Schools will be forced to resurrect pandemic-era contingency measures to stay open for vulnerable children if teachers’ unions go ahead with strikes.

Ministers have warned that walkouts would exacerbate the learning losses that children suffered during the Covid-19 pandemic.

There is particular concern about the impact of potential industrial action on vulnerable children.

Many of them faced a “cocktail of secondary risks” including a lack of food, neglect, abuse and criminal exploitation during the country’s lockdowns, the children’s commissioner for England found.

It comes as Scotland is set to face a major teaching strike. In Scotland,

members of the Educational Institute of Scotland (EIS) members will walk out on January 10 and 11, as well as Scottish Secondary Teachers’

Children think going to university is cheaper than buying a car, poll finds