A tearful Volodymyr Zelensky comforted grieving relatives of his seven interior ministry staff who died in a helicopter crash earlier this week.

The Ukrainian President and his wife attended a memorial service in Kyiv for Denys Monastyrskyi and other top officials killed when their chopper plummeted into a nursery on Wednesday.

Seven others, including a child on the ground, died in the crash on the eastern outskirts of the capital on Wednesday. Officials are still investigating the cause.

It was a fresh blow to a nation already in mourning for the 45 people killed in a Russian missile attack that partially demolished a block of flats in the southeastern city of Dnipro. 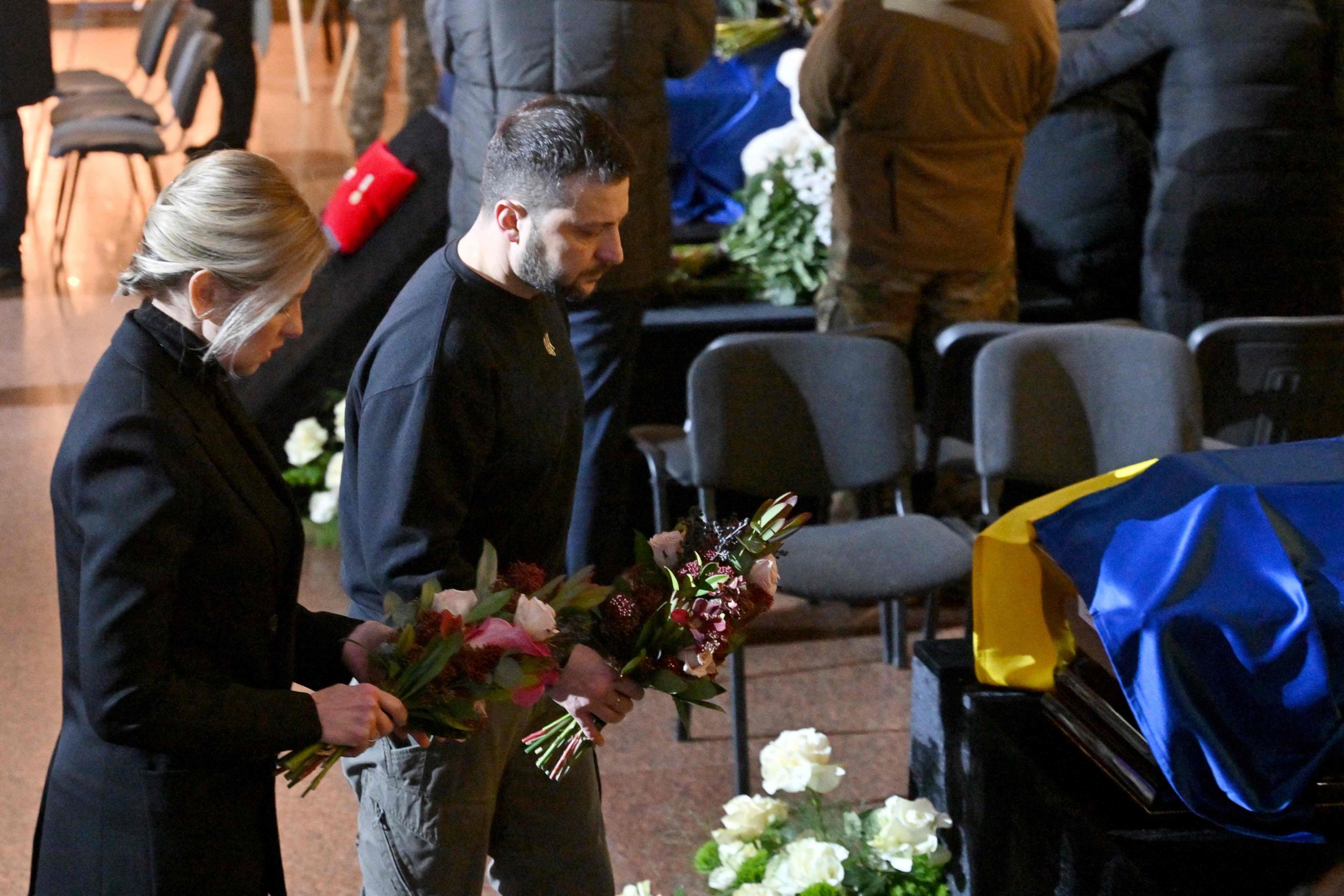 At the somber service, Zelensky and his wife laid flowers on each of the seven coffins draped in the blue and yellow flags of Ukraine.

The president then spoke briefly with the families, as a small orchestra played a mournful adagio.

Writing on Telegram on Saturday, he said: ‘The indescribable sadness is covering the soul. Ukraine is losing its best sons and daughters every day.’

Ruslan Stefanchuk, chairman of Ukraine’s parliament, said after the service: ‘All this would not have happened if not for this terrible and undeclared war which the Russian Federation is waging against Ukraine.

‘Therefore, we must remember this and not forget these people. Because for Ukraine and Ukrainians, every lost life is a great tragedy.’

The war in Ukraine, which is nearing the end of its 11th month, is ‘in a state of deadlock’, with Ukrainian forces likely achieving small gains in the northeast, near the town of Kreminna, while Russian forces ‘have likely been reconstituting’ in the eastern town of Soledar after taking it earlier in the week, the British defence ministry said Saturday.

There is ‘a realistic possibility of local Russian advances’ around Bakhmut, an eastern city whose capture would give the Kremlin a long-awaited victory after months of battlefield setbacks, the department added in its daily update.

Fierce battles for Bakhmut have been raging and three civilians were killed by Russian shelling in that area of the eastern Donetsk region, the deputy head of Ukraine’s presidential office reported on Saturday morning.

In total, five civilians were killed and 13 wounded by Russian shelling over the past 24 hours in Ukraine’s east and south, where active fighting is ongoing, Kyrylo Tymoshenko said in a Telegram post.

Ukrainian forces overnight repelled Russian attacks in Bakhmut and other parts of the country’s embattled east, the military said in a Facebook update Saturday morning.

He added that four other people were wounded in the province.

One woman was also killed in the southern Zaporizhzhia region, where Russian forces launched over 160 shelling attacks overnight, Governor Oleksandr Starukh reported in a Telegram post.

He said that 21 cities and towns were targeted, and two other civilians sustained injuries.

Revealed: How Prince William’s marriage could have changed monarchy forever

Boris gives green-light to move UK out of lockdown – pubs, hairdressers and shops to open