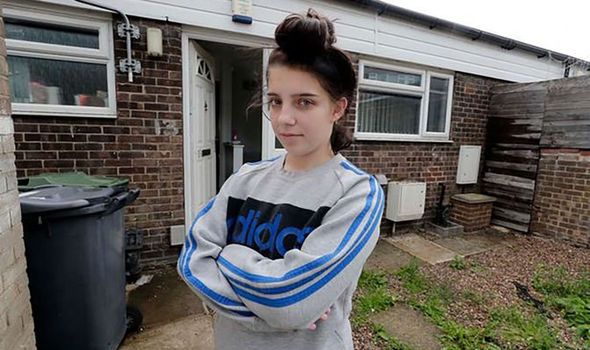 Sophie Smith, 17, has to spray air freshener around the property every day because, she claims, the stink permeates the building. Workmen have tried repeatedly to fix the problem, which originates in the basement, but have had little joy.

Sophie, who has a seven-month-old son, another son who is nearly two and is pregnant with her third child, said she suspected problems days after moving in.

“My friends don’t say anything but it is awkward. It would be nice to have a sweet-smelling home I could invite them to,” Sophie told Yorkshire Live.

“From the first day I walked through the door on February 4 I could smell there was something wrong.

“Workmen have been round plastering the area in the basement where there’s a problem but the problem seems deeper rooted than that.

“It’s getting me down. I am always at the doctors with them [the children] as they are having chesty coughs all the time.

“I have to leave the windows open as much as possible and I keep my clothes in the kitchen otherwise they smell of damp if I keep them downstairs.”

My friends don’t say anything but it is awkward. It would be nice to have a sweet-smelling home I could invite them to

The mother moved into the property in Dewsbury, West Yorkshire, on February 4.

Kirkless Council, which the Labour Party lost last year to no overall control, says it has been investigating the problem since then.

But Sophie’s mum Angela Harrison, from nearby Gomersal, said: “Something needs to be done. The kids are forever getting poorly and it does smell here.

“It hits you as soon as you walk through the door. I think she needs to move, it’s not good.”

Councillor Cathy Scott, Cabinet Member for Housing and Democracy for the authority, said: “We are aware of the ongoing issues with damp in Ms Smith’s home.

“We have been investigating this for several months now to establish the exact cause of the damp, several remedial works have already taken place and detailed survey work has identified the need for specialist work which should alleviate the issue.”

Cherie Forrest, 33, husband Darren have been waiting for a larger home for their eight kids since 2018.