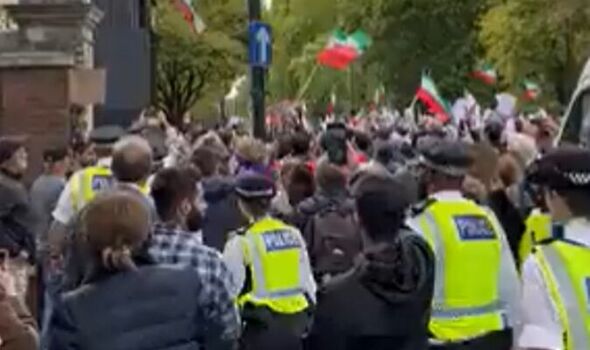 Tensions have boiled over outside the Iranian embassy on Princes Gate in London with protesters engaged in furious clashes with police officers. Scores of angry protesters are trying to gain access to the grounds of the embassy, with police reportedly being pelted with eggs. Ambulances have also been seen arriving at the scene during the clash between police and protesters, who have also thrown red paint over the front of the building.

Video footage shared on social media shows the protesters charging towards barriers by held by police. Protesters can be heard furiously shouting at police, with the officers warning them to “get back”.

Over recent days, there has been nationwide unrest in Iran which has been triggered by the death of a woman detained by morality police.

Demonstrations began more than a week ago at the funeral of the 22-year-old Kurdish woman, Mahsa Amini, and quickly spread throughout the country.

Activists have claimed authorities have restricted internet and mobile services to prevent footage of the protests and the response by security forces from getting out.

Iranian President Ebrahim Raisi has said the country ensured freedom of expression and that he had ordered an investigation into the death in detention of Amini. She was arrested by police enforcing the Islamic Republic’s restrictions on women’s dress.

He condemned the “acts of chaos” and warned they were unacceptable, adding Iran must deal decisively with the unrest.

Boy, 17, arrested over rape of 15-year-old girl in the sea near busy beach