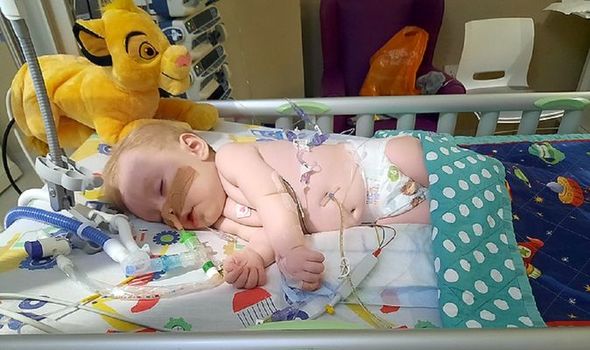 Theo Greenhall, one, has spinal muscular atrophy (SMA), which restricted his breathing, caused his limbs to become floppy and prevented him from swallowing. His parents, Natalie and Sean, both 33, were given the devastating news he was not likely to see his second birthday soon after his birth. Last March, the wonder drug Zolgensma which costs £1.795million per treatment became available to SMA babies under one in the UK, giving the family hope at last.

The one-off infusion, given in just an hour, uses a harmless virus to deliver a healthy version of the SMN1 gene, which is defective in those with spinal muscular atrophy. While Theo qualified for the drug in July, doctors later discussed pulling his treatment when he was admitted to hospital for six months with breathing problems.

His nervous parents were relieved when his symptoms eased just in time and he got the critical infusion in November. Since then, Natalie said that Theo’s mobility has increased dramatically – and the couple are hopeful he will enjoy a long, happy life with them.

Natalie, who is Theo’s full-time carer, said: “We were told it was terminal, he’d never sit, he’d never stand or walk, and now we’re seeing a few of those boundaries being broken.” But it has been a gruelling journey.

Theo was first put on a drug called Spinraza, requiring “traumatic” monthly spinal injections. In March 2021, Natalie learned the NHS would be funding a new drug. Theo was among the first babies eligible for Zolgensma.

But he entered intensive care on July 4 – yet he needed to be off the ventilator for at least 18 hours to get the drug with his November birthday deadline looming. Natalie, from Warrington, said: “So from July to October, each day we took him off it for 20 minutes, then an hour. With the clock ticking, doctors, “surprised” at the progress, gave him the all-clear to get the drug. Natalie said: “For that money to be spent on our child is just incredible.”