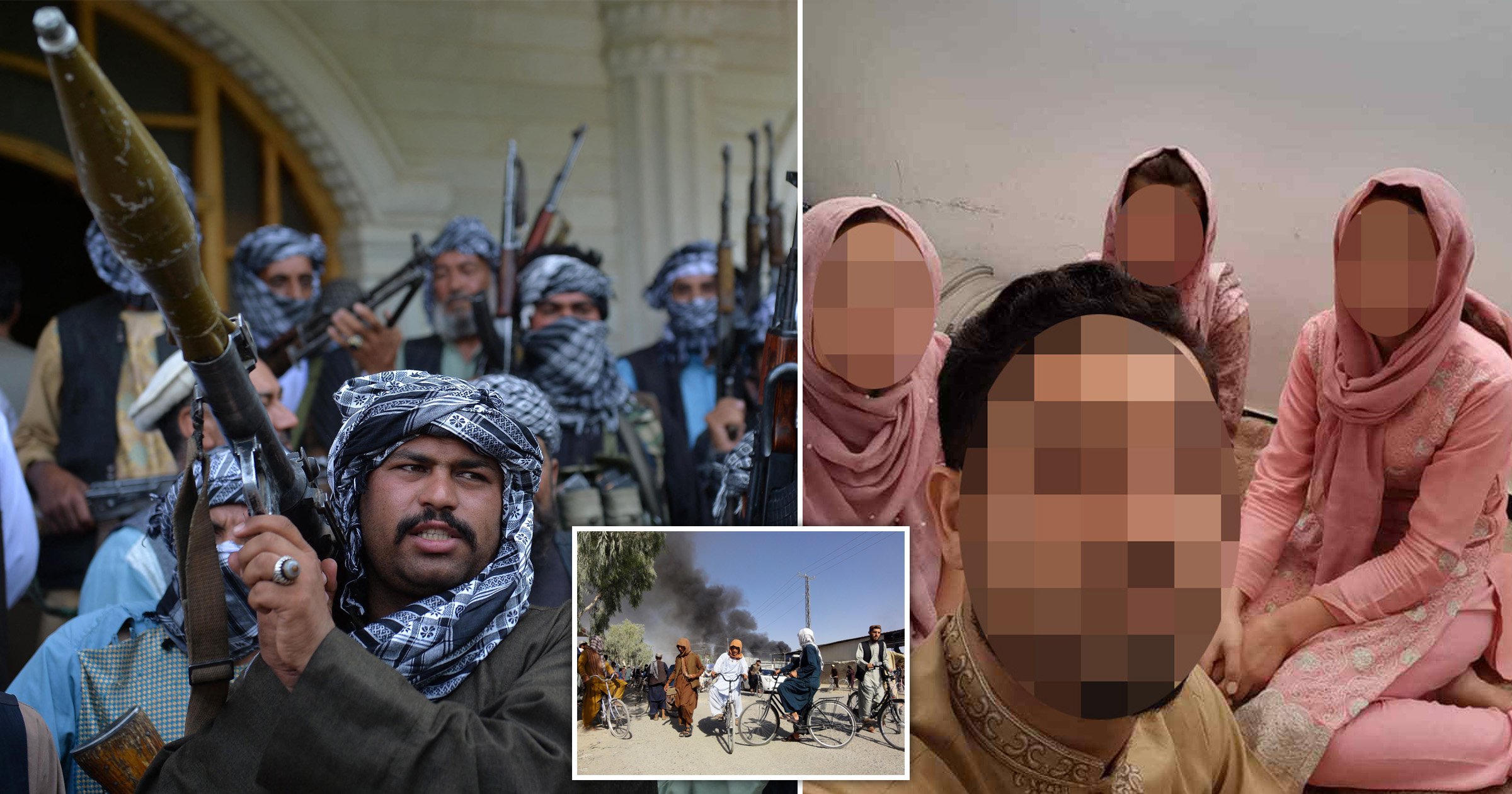 A former English teacher and his family are in hiding in fear for their lives as the Taliban sweep into Kabul.

The ex-British Council employee, his fiancée, three sisters and two nieces aged six and 10 face an uncertain fate at the hands of the insurgents, who have taken control of Afghanistan.

They fled their home province, Ghazni, as it fell to the Taliban last week, taking an expensive 150-mile taxi journey to Kabul, where they are running out of food in a rented house.

This morning the internally displaced people were taking shelter in the basement amid the intermittent sound of gunfire nearby and chaotic scenes at the city’s airport, from where they can hear the agonising sound of others flying for safety in the UK.

The 28-year-old told Metro.co.uk: ‘We are hiding in the basement of the rented house and hoping to hear from the British Embassy.

‘We have heard international troops are at the airport evacuating people who are the lucky ones and we can hear gunfire every now and then. We can’t afford food, because I haven’t worked for the last couple of months and I paid a lot of money to take my family from my hometown to Kabul.

‘I am also paying around ten times more than normal for the rent as displaced people from all over Afghanistan have come to Kabul and housing in limited. My family is depending on me.

‘For the last couple of days we have been surviving on bread and water only. I don’t have any idea how we will survive, we are devastated as we wait and listen to the sound of planes fly over us.

‘I am just praying and trying to survive for my family.’

The master’s graduate was highly exposed to those opposed to the foreign mission through his work for a British Embassy project to bring English to Afghanistan, including to male and female students.

He worked at Abdul Hadi Dawi High School in the capital between 2009 and 2010, delivering the UK programme by training teachers and students, before returning to his home province when the programme ended.

The former ‘master trainer’ could have left the country in 2014 along with other educators but decided to stay to be part of his homeland’s future, taking a master’s degree in public policy at Herat University.

He now feels he and his family have been left to die as an ‘infidel’ remnant of the UK and US mission, which is being withdrawn amid catastrophic strategic, military and humanitarian consequences.

He told Metro.co.uk he is among 60 former British Council employees who are still in the country as the Taliban takes control.

The fluent English teacher applied to be resettled through the Afghan Relocation and Assistance Policy (ARAP) on July 11 but says he has not heard anything back, despite Afghan staff based in the Embassy itself being flown to safety in the UK. His father and grandfather remain in Ghazni as there were not enough seats in the taxi.

The man said: ‘We were very much more exposed compared to those staff who were working at the British Council headquarters in the safe compound of the embassy, yet their ARAP applications have been accepted and some of them have been relocated to the UK.

‘However those of us who were in the frontline of the services across 15 provinces, have been rejected, even though we were in the public eye, with everyone in the communities knowing we were working for the embassy.

‘The Taliban see us spies who were assisting the infidels and I have lost contact with many of my former colleagues.

‘Many of us are in hiding in Kabul.’

The fluent English teacher, who left his role when the English for Afghans programme ended, was in the vanguard of efforts to give Afghanistan a brighter future.

‘The Taliban are searching for us,’ he said.

‘I haven’t heard from one of my colleagues for the last four days, he is not on the phone or the internet and other colleagues are saying he has been captured by the Taliban because he was identified sooner than others.

‘The Taliban are telling the media they are not targeting people who worked for the British and other nations’ embassies but they are after us, they are targeting us.

‘They are going to find and kill us secretly, because they don’t want the media to find out about their brutality. I am in fear of my life and my family’s lives because everyone knows I was working for the British Council in Afghanistan. I didn’t know this day would come so everything is in public on social media about the work I did.’

The former British employee, who does not want to be named for his safety, said some of his managers based at the embassy had been accepted onto the fast-track ARAP scheme, but others in lower grades had not.

‘They should treat our cases with extreme urgency; we served the British Government on the frontlines, with the public, with the communities, because we were working for Afghanistan and the people.

‘I could have left in 2014 when some of my colleagues did but I had recently graduated at the time and I wanted to give back to the community.

In May 2021, the Ministry of Defence (MoD) made a commitment to ‘significantly accelerate’ relocations through the ARAP, which is not time limited and prioritises those most at risk.

Other support, including security advice, financial assistance and relocation to safe areas within Afghanistan, was being provided, according to the Government at the time.

A spokesperson has said: ‘Nobody’s life should be put at risk because they supported the UK Government in Afghanistan.

‘Our Afghan relocation policy is one of the most generous in the world and has already supported over 2,700 former Afghan staff and their families to start new lives in the UK, with more than 1,000 of them arriving over the last few weeks alone. As we continue to significantly accelerate the pace of relocations, hundreds more will follow. We carefully assess each application for relocation under the criteria of the ARAP.

‘Those who were dismissed for serious offences, including those that constitute a crime in the UK or threatened the safety and security of British troops, will continue to be excluded.’

A British Council spokesperson has said previously: ‘We take the safety of all those involved in our programmes extremely seriously.’

Metro.co.uk has approached the British Council and MoD for further comment.

Isis Bride Shamima Begum to beg to get UK citizenship back