Home » Europe » ‘Thank goodness Meghan is not coming’: Queen’s relief on the day of Philip’s funeral 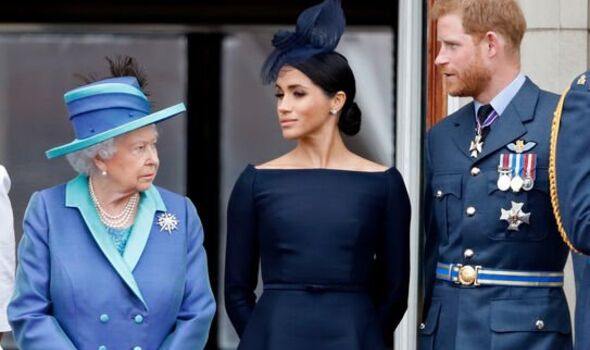 In his explosive new book, Revenge: Meghan, Harry And The War Between The Windsors, Tom Bower claims on the day of the funeral, the monarch told her aides: “Thank goodness Meghan is not coming.”

Buckingham Palace declined to comment on the book, but sources close to Her Majesty said she would have been thinking only about her late husband, who had died at age 99.

In his biography, released next Thursday, Mr Bower says of the Queen: “To comply with Covid restrictions she would grieve alone inside the chapel. ‘Thank goodness Meghan is not coming,’ the monarch said.”

Meghan said at the time she would not be travelling as she was seven months’ pregnant with daughter Lilibet.

Mr Bower writes of the funeral service on April 17 last year: “On 9th April, 2021, Prince Philip had died. His funeral was set for 17th April. Harry arrived in London just before the service.”

Daily, the media extolled Philip’s remarkable life and devotion to the country. The Duke had planned a simple funeral at St George’s Chapel, Windsor.

“The rehearsals displayed faultless military drill. Few would not be touched by the perfection of British ceremonial tradition. The weather was forecast to be perfect.

“The only uncertainty was the relationship between Harry and his family. How would he cope with his father and brother?”

To avoid any problems, the brothers were separated by their cousin, Peter Phillips, as they walked towards St George’s Chapel for the service.

Last month Prince Harry, 37, and Meghan, 40, returned to the UK together for the first time since moving to California, with Lilibet, one, and her brother Archie, three.

They reunited with the Queen and other royals during the Platinum Jubilee celebrations.

Mr Bower writes: “Charles preferred that the Sussexes, as private citizens, were not invited on to the balcony or to ride in a royal carriage. Instead, they would be confined to the VIP enclosures.”

Conservative leadership battle: Boris Johnson edges closer to power as he dominates voting in first round