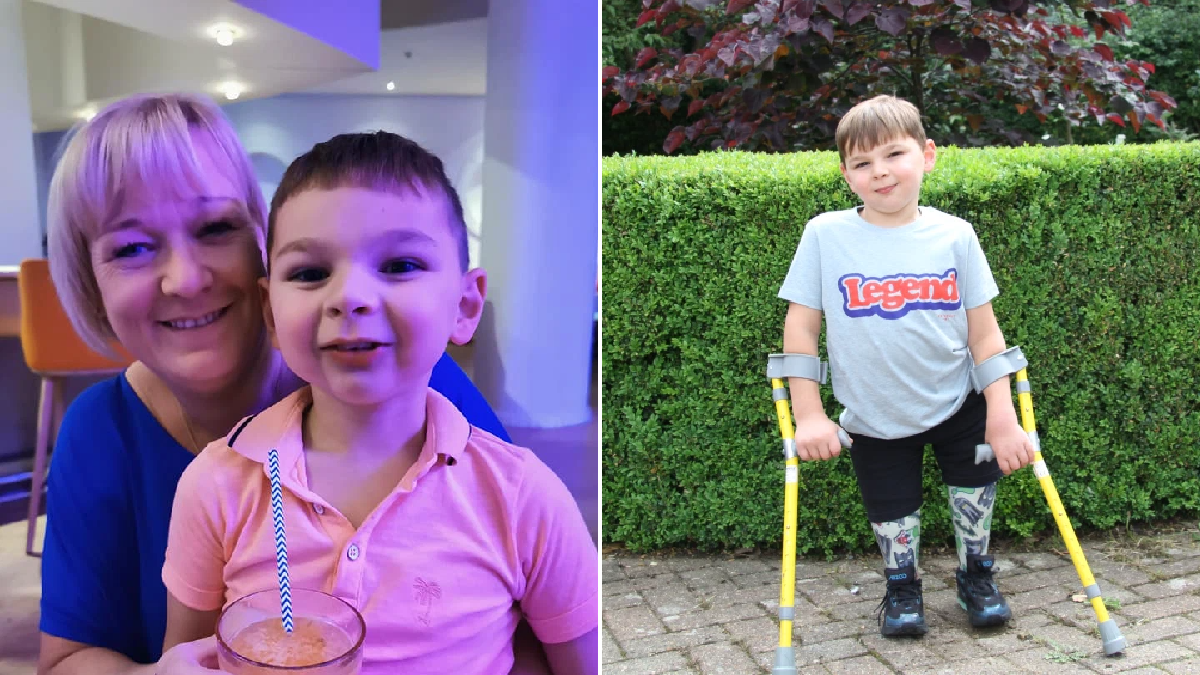 For months, we were trying to get our disabled five-year-old son Tony motivated to learn to walk but he had absolutely no interest in it.

When he was just six weeks old, Tony’s birth parents horrifically abused him, leaving him with multiple organ failure, several fractures and sepsis. Because of his injuries, doctors didn’t know whether he would sit, crawl, walk or even talk so at the age of about three, they decided – and we agreed – it was best if he had a double leg amputation to give him a better quality of life.

As Tony grew up, we tried everything to motivate him to walk – like giving him little stubbies to go over his stumps but they hurt and he didn’t even want to try. Around the age of four, he was given a walking frame but again, he just had no impulse to use it.

Then one day in April last year as we were watching the news, Tony saw Captain Sir Tom Moore using his walking frame while doing 100 laps of his yard and trying to raise money for the NHS.

‘Mommy, he’s got a frame just like me,’ Tony excitedly remarked. Suddenly, something inside of him clicked and he decided he wanted to try walking with his crutches.

So he picked them up and gave it a go, which was extremely difficult for him at first. I felt very proud that he wanted to try, as his grit and determination shone through.

Over time, he kept seeing Captain Tom on the telly and was glued to it. It seemed like he had a fixation to the story and almost immediately became quite attached to him. He thought of him as a superhero.

Just like his new hero Captain Tom, Tony decided that he wanted to challenge himself by walking with his crutches as much as he could. We were so glad that he was finally giving walking a proper go.

So we set a target of 10km and a fundraising goal of £509 to be donated to Evelina London Children’s Hospital. This is because in November 2014 – at just 41 days old – this is where he ended up after his parents swung him by his ankles and broke his legs in eight places.

It’s no exaggeration to say that when Tony was rushed to hospital, he was close to death so we owe the Evelina London Children’s Hospital his life.

My husband and I didn’t really know too much about his story when we were called and asked whether we could foster him. I agreed to go and meet him at the Evelina to learn his routine and medication for 48 hours before I could take him home.

We went on to formally adopt him in 2016. So raising money as a thank you to the hospital for giving him a second chance at life was an opportunity my husband and I happily agreed to.

Tony is fully aware of his birth parents and the fact they are in prison because they didn’t look after him properly. He knows they let him get very poorly that he nearly died but he doesn’t know they actually caused his injuries.

After the first day of his 10km walk in June, we worried it could be a bit too much for Tony with his injuries. Up until this point, he had only been using his crutches for 10 days before the challenge started.

It was very hard for him because not only is he a double amputee, he also has part of his hip joint missing too, as well as other bone issues.

Despite this, he persisted every day and his confidence with walking started to grow. As parents, we were extremely proud.

Around the same time, we appeared on BBC Breakfast to share Tony’s story and the challenge he was embarking on. Within 24 hours, we had raised over £130,000 and we were absolutely gobsmacked.

After Tony hit £1 million, he received a ‘well done’ from message from Captain Tom himself, together with his family, saying how impressed Tom was with his Tony’s incredible achievement. He urged our son to ‘keep going’ because he was inspired by his story.

Captain Tom’s thoughtful message of encouragement made Tony’s face light up in sheer joy and brought tears to my eyes.

With such a fantastic boost from Captain Sir Tom Moore, for the rest of that month, Tony persisted in his walking challenge and ended up smashing his fundraising goal.

At the time of writing, Tony’s raised over £1.3 million for the Evelina London Children’s Hospital, as well as almost £150,000 for Tony’s own personal needs – like a wet room and lift adaptations at home. It’s a tremendous sum of money and we’re so happy to help other families going through difficult times.

Even since Tony finished his walk at the end of June last year, the communication between him and Captain Sir Tom Moore didn’t stop. Every so often, we’d receive messages on social media or via TV interviews asking how we were and motivating Tony to keep going.

The last message we received was in December – where he called Tony a ‘star’ for all of his fundraising efforts – but unfortunately we never got to meet Captain Sir Tom in person due to lockdown restrictions.

He was very upset and went to bed that night hugging his Captain Tom soft toy (complete with little glasses, that a lovely lady knitted and sent when Tony was doing his 10km walk). He understood that Captain Tom was very old, but also that he’d done so much for so many people.

I feel regret that they never got to meet each other in person because despite 95 years between them they were such kindred spirits. They would’ve had a wonderful connection but we are so grateful for all his support.

We’re sending a card to Captain Sir Tom Moore’s daughters to express our condolences and to say thank you for everything their father did for our family. We also took part in the commemorative clap last night.

Captain Sir Tom Moore will always have a little piece of my heart because he’s the one who inspired my little boy to take his first steps.

It’s hard to put into words how devastating a loss like this is for loved ones, but we were so honoured that he took Tony under his wing.

We’ll always remember him as a true hero and role model – and seeing the outpouring of grief across the nation is proof we’re certainly not alone.

I take comfort in Captain Sir Tom’s own words of positivity ‘tomorrow will be a good day’ – thanks to his efforts it is true for my Tony and countless others.

You can donate to Tony’s fundraiser for the Evelina London Children’s Hospital here or his personal disability support fund here.

Top lawyer says trials should be held without juries during pandemic