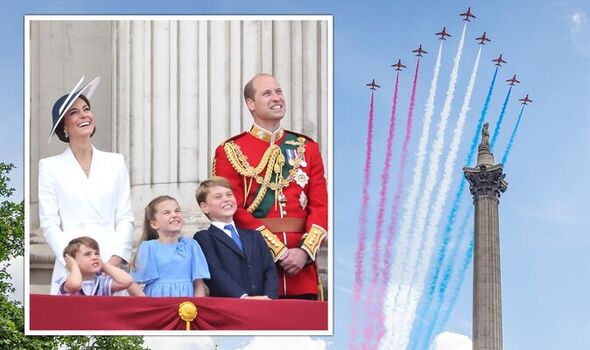 The Royal Family at Trooping the Colour 2022

Here are all the best pictures of the Queen, William, Kate, George, Charlotte and Louis at Trooping the Colour today.

Trooping the Colour 2022 has been a long time coming after the 2020 and 2021 editions took place at Windsor Castle due to the Covid pandemic. But the public was not disappointed as the fabulous military display and aerial spectacular finally took place in the heart of London once again to mark the Queen’s Platinum Jubilee.

The Queen delights crowds with her balcony appearance

The Queen looked ecstatic on the Buckingham Palace balcony as her Platinum Jubilee celebrations began.

The Queen and Duke of Kent watch Trooping the Colour

The Queen was joined by her cousin Prince Edward, Duke of Kent, as she watched the troops return to Buckingham Palace.

Kate, Duchess of Cambridge smiles at the crowds

The Duchess of Cambridge dressed in a stunning white ensemble for Trooping the Colour this year, and she looked in her element as she smiled at the crowds.

Prince Charles and Prince William took part in Trooping the Colour on horseback this year alongside Princess Anne.

Kate and Camilla beam in their carriage

The two future queen consorts looked delighted to be in each other’s company to mark the Queen’s Platinum Jubilee.

The Queen chats to Prince Louis on the palace balcony

The Queen proved she is a doting great-grandmother as she chatted to Prince Louis on the palace balcony for the RAF flypast.

The loud noises prove too much for little Louis

Prince Louis covered his ears as the sounds of the aircraft ripped through the skies, and the Queen looked quite bemused by her great-grandson’s antics.

The Cambridge family smile at the RAF flypast

Prince Louis and Prince George looked captivated by the aerial display, while Kate, Duchess of Cambridge’s happiness was written all over her face in this sweet Cambridge family snap.

Meghan Markle vs Grace Kelly: How American actresses gave up everything to marry a prince