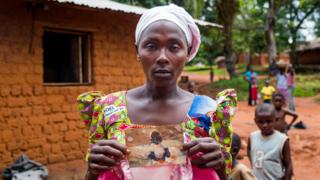 A court in Belgium is investigating an orphanage for alleged abduction and trafficking of children from the Democratic Republic of Congo. Children were brought to Belgium and adopted by families who had been told they were orphans. Years later, DNA tests have proved that in some cases they were not.

Hundreds of miles north of DR Congo’s capital, Kinshasa, is the village of Gemena. Most people make a living from agriculture or fishing; others are carpenters or shopkeepers.

Abdula Libenge, a 34-year-old tailor, is the father of one of four families in the area who in May 2015 sent a child away to Kinshasa on what they thought was a holiday camp.

Their children never came back. Without access to legal representation or assistance from local authorities, all they could do was wait.

About two years after Mr Libenge’s daughter disappeared, he received an unexpected visit that would finally shed light on what happened.

Belgian journalists Kurt Wertelaers and Benoit de Freine had got wind of an inquiry beginning into adoption fraud in their country.

How the two journalists uncovered a scandal

The Belgian public prosecutor had strong indications that the biological parents of a number of Congolese children adopted in Belgium were still alive, and the pair had set out to find them.

Their search led them from Brussels to Abdula Libenge’s workshop in Gemena.

He took them inside and produced a picture of his daughter.

“Taken on the day she left for Kinshasa,” he told them. “She was so happy. We’ll never get the chance to go to Kinshasa. We can’t afford the plane ticket. But she got the chance, and it made us proud.”

It was one of several photos of the group of three girls and one boy, then aged between two and four.

One photo shows them with a young man from a youth organisation, their chaperone to the so-called holiday camp.

“All we have left is this picture and a shoe,” Mr Libenge continued, producing a tiny, white ballet pump for the journalists.

Outside another home Suriya Moyumbe was waiting in tears, clutching a picture of her daughter, who was a toddler when she left and could not yet talk.

“My husband’s family blames me for giving her away for that holiday. I should never have done that. But we all thought it was a great opportunity,” she told the reporters.

Wertelaers and De Freine returned to Brussels to present their evidence and the public prosecutor then travelled to Gemena to gather DNA.

The Tumaini orphanage in Kinshasa has since been shut down.

Belgian-Congolese lawyer Julienne Mpemba is under house arrest and facing criminal charges for her role as head of the orphanage.

Her lawyer, George Balon Perin, has said she “challenges in the clearest way the charges against her”, adding that she is not being prosecuted in DR Congo, where the alleged events took place.

Other people have been indicted both in Belgium and DR Congo, the lawyer has told the BBC.

‘Slap in the face’ for new families

In Belgium, the news was broken to adoptive families one by one.

Some adoptive parents had already voiced their concerns during the adoption process, and told the BBC the news confirmed their fears.

“Knowing DR Congo’s reputation, I was very afraid, but the adoption agency really pushed us towards it and reassured us everything would be legal,” said one father, who declined to named.

“It felt like a slap in the face when we heard. This is what I had always wanted to avoid. And now, despite myself, I have a stolen child.”

One mother described how the agency had poured water on her concerns every time she raised objections. Then one day, her adopted daughter had enough French to start talking about her biological family.

“Once she said ‘you’re not my mummy, Mummy’, when we were reading a fairy-tale.

“I raised the alarm immediately but was dismissed. I thought she might have been talking about an interim, host mother that she had been living with before coming here. But no. It was her mum.”

When the story broke in Belgium, four children were involved. Now, the adoptive parents of a further 15 children are awaiting the outcome of DNA tests.

Why international adoptions can be a risk

“There are people who did not do their job, people who might have benefited financially or in some other way,” says lawyer Georges-Henri Beauthier, who is acting for three of the adoptive families.

“You have to see all of these people collectively as a truly criminal organisation, that is well organised in DR Congo and in Belgium.”

According to child protection expert Nigel Cantwell, these are not isolated cases.

“There is always a bit of anarchy in adoption when you’re dealing with a country which is not party to the Hague Convention, as is the case for DR Congo. There are so many examples in recent years: Haiti, Guatemala, Vietnam, Cambodia. The list is just huge.”

He believes intermediaries, including children’s homes, need regulating and, if possible, removing from the process. “They are the ones making money. Unless you control the money, you won’t control the corruption.”

What will happen to the children?

A Belgian family court will ultimately decide on the children’s future.

“It’s case by case, but any solution should depend enormously on what the child says. We can’t just go about taking decisions on what we think is good for a child without getting that child’s opinion,” explains Mr Cantwell.

For everyone involved the next stage will be hard, and Mr Beauthier says the adoptive parents are preparing themselves for it.

“There is this human reflex which is to say ‘no, no. This is my child, I won’t let her go.’ No. That would be unacceptable, and my clients understand this full well.”

For one adoptive father there is no good outcome.

“We really ask ourselves: what is best for this child? And we don’t have the answer. But there isn’t really an answer. We’re all losers in this story.”

In Gemena, Abdula Libenge had little hope of his daughter coming home.

“I know people will say that she is better off in Belgium. And you know, maybe she is, but I don’t think it was up to anyone else to make that choice. And we didn’t get one.”