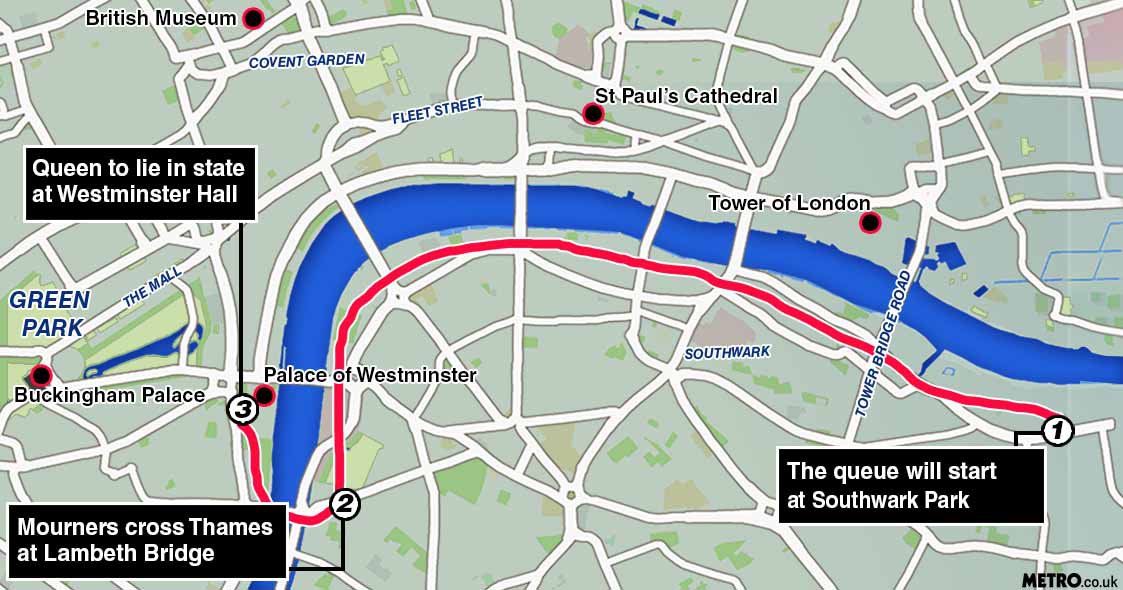 Up to a million people are expected to queue to see the Queen lying in state in London ahead of her funeral on Monday.

They have been told to expect queues of up to 30 hours, with an extensive queue area now being set up to manage the demand.

Barriers and signs are being set up, along with facilities to assist people such as portable toilets.

Some people have already arrived, over 48 hours before they will be allowed into Westminster Hall to file past the closed coffin, from 5pm tomorrow until it closes at 6.30am on September 19.

Before this, there will be a procession of the coffin through the streets of the London, with major rehearsals for this already taking place.

So what is the queue route?

Details will not be officially announced until 10pm tonight, but it is expected to mainly be south of the river before crossing the Thames at Lambeth Bridge.

Toilets, barriers and flooring have been set up in Victoria Tower Gardens, with more temporary toilets put up in Westminster itself.

Fencing has been put up in Southwark Park for the beginning of the queue, with the route then following the line of the river going west past Tower Bridge and Parliament on the other side of the Thames.

They will then cross the river and double back, to end their queue at Westminster Hall.

Those planning to pay their respects before Monday should check the official announcement tonight as well as the most recent details to see how far the queue has actually reached once more people begin lining up.

Around 750,000 are expected to queue up for the lying in state, with the number potentially going up to a million, according to reports.

Some may be disappointed and not manage to go inside despite queuing for hours, with the hall thought to only have capacity for 350,000 mourners before Monday morning, according to The Times.

Government guidance warns: ‘Large crowds are expected, and there are likely to be delays on public transport and road closures around the area. You should check ahead, plan accordingly and be prepared for long queues.

‘Please note that the queue is expected to be very long. You will need to stand for many hours, possibly overnight, with very little opportunity to sit down, as the queue will keep moving.

‘Please consider this before you decide to attend or bring children with you.

For those in London for the occasion but not able to queue for so long, the procession of the Queen’s coffin will begin at 2.22pm tomorrow.

This will be televised on large screens in Hyde Park, where people are invited to gather from 11am.

Thousands of people queued overnight in Edinburgh with waits of up to six hours.

This morning, however, people had a much shorter wait with some able to go quickly into St Giles’ Cathedral.

If these latest speculated figures of how many people turn out in London prove correct, the number would dwarf the more than 300,000 people who came to see King George VI, the Queen’s father, lying in state in 1952 – and the 200,000 who came to see the Queen Mother’s coffin in 2002.

Some guidance has already been released about what to bring to the queue, and which items will be banned.

People will not be allowed to take photos in the hall, and will go through airport-style security with tight restrictions on what they can take in.

To prepare for security screening, all items such as mobile phones, keys, small change, belts, heavy jewellery and watches must be placed into your bag or jacket pocket if you have one.

As per Parliament instructions, there’s a comprehensive list of items which will be confiscated if you attempt to bring them near or inside Westminster Hall.

To start with, practically speaking, you should plan to only bring a small bag. Any bags larger than 40cm x 30cm x 20cm in size – as well as bags with expandable compartments, multiple pockets, complex openings, bags on-wheels and solid-sided bags – are banned.

Larger bags may be left in the bag drop facility, although capacity will be limited.

To make entry into Westminster Hall easier, ensure you are not bringing inside forbidden items including food and liquid (you can eat while queuing but no food or drink must be brought inside the hall itself)

People will not be allowed to camp along the route, or bring folding chairs into the hall.