Home » Europe » The Iran Crisis: How We Got There and What’s Next

The International Atomic Energy Agency confirmed Monday that Iran had resumed enriching uranium to higher levels than permitted under a 2015 accord with the United States and other world powers. The step inches Tehran closer to have the capacity to build a nuclear bomb.

President Trump’s administration has vowed to prevent Iran from developing such weapons.

The escalating tensions have rattled the region and the oil market, and last month brought the United States to the brink of a military strike on Iran before a last-minute reversal by President Trump.

Following is a look at how Iran and the United States reached this point of confrontation — and what’s likely to happen next.

How did this all start?

Like President Trump, President Barack Obama doubted the assertions of Iranian officials that they would never seek a nuclear bomb. Both administrations made it a priority to stop Iran from getting one.

And both sought to do it through a combination of diplomacy, economic sanctions and military threats — even if Mr. Trump’s threats have been far more blunt, suggesting parts of Iran could suffer “obliteration.” But their paths diverged from that point. 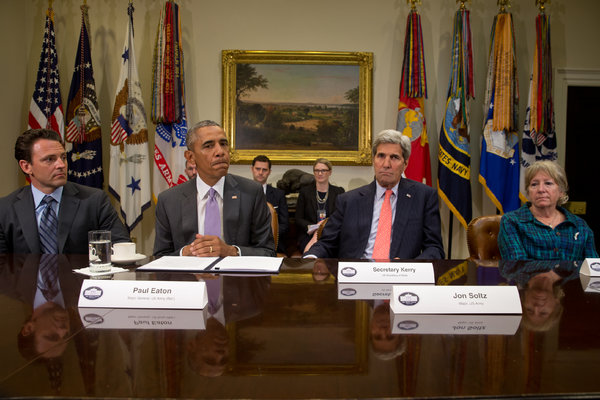 So what did the Obama administration do?

Mr. Obama tried to deal with Iran’s nuclear program without addressing other complaints about Iranian policies, like its pursuit of advanced ballistic missiles or its support for allied militias in other countries around the region (including in Lebanon, Syria, Iraq and Yemen as well as Gaza in the Palestinian territories).

Mr. Obama also seemed to hope that ending Iran’s diplomatic and commercial isolation from the West might build incentives for Tehran to be less belligerent toward its neighbors and the United States. In the view of his administration, the Islamic Republic of Iran, the theocratic state created by the revolution of 1979, was a fact of life.

The Iranians and their American-backed Arab rivals “need to find an effective way to share the neighborhood and institute some sort of cold peace,” Mr. Obama said in a 2016 interview with Jeffrey Goldberg of the Atlantic.

Under the 2015 deal, Mr. Obama got Iran to dismantle key pieces of its nuclear program and submit to intrusive inspections. But much of the deal was temporary. The limits on Iran’s development of nuclear centrifuges expire in 2025, and the limits on its enrichment of uranium expire in 2030.

Tehran was promised relief from suffocating economic sanctions, and no limits were placed on its conventional military or behavior in the region. In international diplomacy, Iran for the first time won the right to enrich at least a limited amount of uranium to at least a low level, sufficient for some civilian uses.

Why did President Trump reject that approach?

President Trump and other critics argued, with some evidence, that Iran was exploiting the opportunity to fortify its conventional military and to build up its allied militias around the region. Convinced that Iran’s theocratic rulers would remain implacably hostile to the United States and its allies, the critics argued that Iran would emerge with greater resources to race toward a nuclear weapon, once the deal’s provisions on nuclear fuel enrichment had expired.

So after withdrawing from what he called a “terrible” deal last year, President Trump embarked on a campaign of “maximum pressure” to force Iran to accept far more comprehensive and permanent restrictions. That campaign consisted of reimposing economic sanctions and, in May, measures to cut off almost all of Iran’s oil sales. Iranian officials have denounced those measures as a form of warfare.

Curiously, as some critics have noted, Mr. Trump is now approaching North Korea in the same way Mr. Obama approached Iran. He has sought to build a personal connection to its leader, Kim Jong-un, tempting him with visions of international investment and economic development if North Korea stops pursuing a nuclear weapon.

And in what critics call a further confusion, Mr. Trump has sometimes hinted that, even with Iran, he might be willing to compartmentalize the nuclear issue. “You can’t have nuclear weapons. And other than that, we can sit down and make a deal,” Mr. Trump said in a recent television interview, summarizing his message to Tehran.

How is Iran responding and what are its options?

Iran could simply give in. Economic sanctions under Mr. Obama helped push Iran to negotiate the 2015 deal, and the current penalties are even more painful. But history suggests that economic sanctions alone may not be enough to coerce a country into surrendering nuclear ambitions. “We will eat grass or leaves, even go hungry. But we will get one of our own,” Zulfikar Ali Bhutto, the 1970s-era prime minister of Pakistan, famously declared about his country’s response if its rival, India, developed a bomb. (India and Pakistan are now nuclear powers.)

Refusing to capitulate to Mr. Trump’s pressure, Iran has said that it has chosen another option: gradually exceeding the limitations on its nuclear activities under the 2015 deal. The Iranians argue that they are still adhering to the deal because in their view, certain provisions authorize them to decrease their compliance if the United States and the other counterparties fail to deliver the promised sanctions relief.

Iran’s main audience for those moves are the European powers who signed the deal and still support it. By gradually restarting their nuclear program in staggered increments, Iran’s leaders hope to pressure the Europeans to provide help evading the American sanctions, or at least to drive a wedge between the Europeans and Mr. Trump. They said over the weekend that they plan to push ever further over the limits of the nuclear deal in leaps every 60 days unless Western governments honor their end of the bargain.

Iran could also retaliate against the United States with conventional military force.

Tehran demonstrated its capabilities last month by shooting down an American surveillance drone flying at high altitude. And the United States has also blamed Iran for using naval mines to damage six petroleum tankers in two attacks in the waters around the Persian Gulf.

But direct attacks against the United States risk retaliation — Mr. Trump only narrowly aborted a missile strike for the downing of the drone. Analysts say it is more likely that Iran would act indirectly, equipping and encouraging client militias in other countries around the region to attack American forces or American allies.

Saudi Arabia has already complained of stepped-up attacks on its soil by Iranian-backed militias in nearby Yemen and Iraq. Those actions could hurt Americans indirectly by raising the price of oil.

Iran may hope that Americans will elect a new president in 2020 who could revive the deal. But it might not survive that long. Each step Iran takes past the deal’s limits increases the risk that the European countries might restore their own sanctions, effectively nullifying the accord.

Either by accelerating its nuclear progress or violent retaliation, directly or through allies, Iran raises the risk of American military action. The Trump administration has said that it would hold Iran accountable not only for direct attacks on American targets but any strikes by Iran’s militia allies.

Mr. Obama’s bet was that the 2015 deal would build enough trust or financial interest on the part of Iran to make it easier to extend the restrictions. The Trump administration has bet the opposite — that without sanctions a prosperous Iran would grow only more belligerent toward the United States and dangerous to its regional rivals.

“What we are facing is a looming confrontation with Iran that is escalating across multiple vectors,” said Mark Dubowitz, a prominent critic of the 2015 deal and chief executive of the Foundation for Defense of Democracies, a Washington group. “But we were going to face the same confrontation eventually, and my view is that you are better off confronting a weakened Iran today than a stronger Iran tomorrow.”