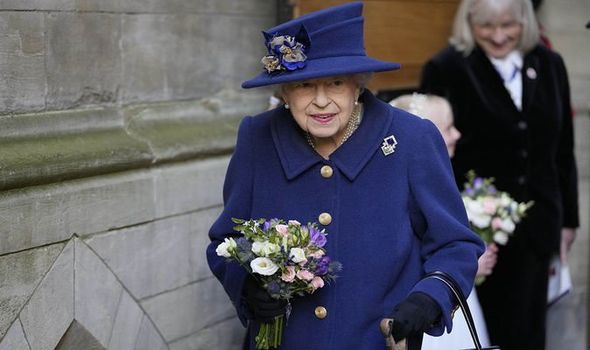 A service at Westminster Abbey, St Paul’s Cathedral or even St George’s Chapel, Windsor would allow the many organisations that worked with Philip and some of his former aides to bid him a proper farewell.

But it would also be chance to invite the Duke and Duchess of Sussex to Britain in a bid to ease the tensions that have left relations between Harry and Meghan and much of the rest of the family strained, royal insiders say.

There has been little sign of fence-mending so far – as Harry, 37, has decided to stay away from a reception to thank funders of the statue of his mother next Tuesday.

At Kensington Palace, his brother Prince William, 39, will thank around 100 friends of Princess Diana, including Sir Elton John, for their contributions.

The unveiling of the statue on July 1, which would have been Diana’s 60th birthday, was attended by both William and Harry.

The men were smiling as they joked together, before pulling back a cloth to reveal the sculpture.

It was the first time they had seen each other in person since Prince Philip’s funeral in April.

Harry and Meghan, 40, are understood to have ruled out returning to Britain for a royal christening ceremony for their four-month-old daughter, Lilibet.

They are building a new life in the US and initial claims that they would make visits to Frogmore Cottage, their home at Windsor, have proved groundless so far. Some courtiers wonder whether Meghan will ever come to Britain again.

One result of the Sussexes’ continued absence in exile, even now most Covid restrictions have been lifted in Britain and the US, is that Prince Charles has only seen his two-year-old grandson Archie on a handful of occasions and has never met Lilibet.

Joe Little, managing editor of Majesty magazine, said a thanksgiving or memorial service for the Duke of Edinburgh would make sense because the ceremony that saw him laid to rest was much smaller than planned because of Covid regulations.

He said: “Given that the funeral could only be attended by 30 people when it was originally planned for 800, it seems common sense to have a memorial service to allow all those organisations that worked closely with the Duke to pay their respects.”

Philip, who died two months short of his 100th birthday – almost 74 years after he married the Queen – was patron of more than 800 organisations.

The Daily Express understands that the idea of holding a thanksgiving service is still being discussed within the family.

Insiders had speculated that it might be held this autumn but time is running out to organise such a major event. A service next spring is one possibility. Last night, Buckingham Palace declined to comment.

Ed Sheeran and Prince Harry: How Prince and pop star bonded over this unique trait