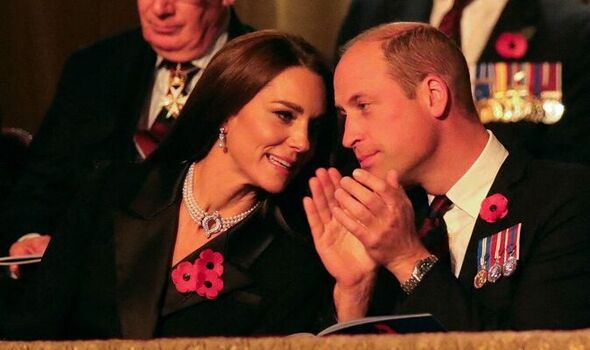 It comes after the rift between the Sussexes and the Wales’ courts shows no signs of healing, despite the Queen’s death and their brief reconciliation at her funeral. According to Ok magazine, the couple will be improving the Firm’s image stateside.

After visiting a Ukrainian centre in Reading last week, the Prince and Princess of Wales are visiting Boston to attend the Earthshot awards.

She said the Wales’ trip to the US was therefore an opportunity to get “the House of Windsor firmly back on the front foot across the pond” and to “elevate the monarchy above entertainment news”.

Kate and William are ramping up their engagements following the Queen’s death in September and the mourning period for the Firm.

They were awarded new titles after Prince Charles became King Charles III as he acceded to the throne, following his mother’s death.

A coronation ceremony said to be pared down, takes place next year.

During the couple’s trip to the States, they will undertake a number of engagements and showcase issues from climate change to vulnerable people and eco-technology.

It’s their first trip in eight years when they visited New York back in 2014.

The focus of this year’s trip is the Earshot Prize award ceremony on December 2 in Boston. It will be covered by the BBC.

Just four days later, though, William’s brother Prince Harry will attend an awards ceremony in New York for their work on racial justice.

Their Netflix documentary is expected to air within weeks despite the couple’s efforts to push it back into 2023. They are rumoured to have received a staggering £88million advance from the broadcaster.

Speculation has been rife that following the Queen’s death, the couple are keen to “downplay much of what they have said about King Charles III, Queen Consort Camilla and the Prince and Princess of Wales”, in the Netflix documentary series.

It is unclear if the two couples, the Sussexes and Kate and William, will meet when they are stateside. Harry and Meghan are based on the west coast in Montecito, California, and have a young family.

Robert Jobson told the Mirror he thinks they will “stamp their personalities” on all future tours as Kate and William “insist on doing it their way.”

After three decades covering royal tours, he added the format has rarely changed.

Frail Mikhail Gorbachev warns against return to the Cold War