The cost-of-living crisis has been straining household budgets for many months now, with annual inflation hitting a 40-year record high of 10.1 percent in July. Survey data show the degree to which people in the UK are worried about rapidly increasing prices varies with age, income-level and living situation – but which UK cities are most concerned.

The UK’s headline rate of inflation hit 9.9 percent in August according to the latest figures published by the Office for National Statistics (ONS). This represents a marginal decrease from the 10.1 percent recorded in July – the highest reading since 1982.

In a bid to control runaway inflation, the Bank of England has been raising the interest rate at an accelerating pace, driving up monthly mortgage payments.

Although Liz Truss’s Government freezing the average annual household energy bill at £2,500 for the next two years from October 1 – down from the £3,549 price cap announced by state regulator Ofgem – this still represents more than double what people had to pay for gas and electricity a year ago.

As a result, UK households have been besieged by expense increases on all fronts, as the cost-of-living crisis looks set to become an even more serious concern for many as winter approaches. 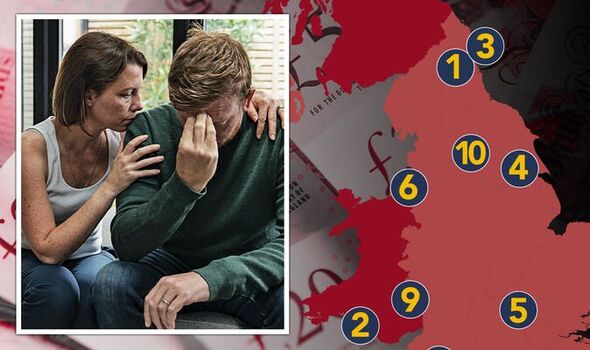 A recent ONS survey found that around three in four adults, 77 percent, reported feeling very or somewhat worried about the cost-of-living crisis.

A total of 31 percent of UK adults with a gross personal income of less than £10,000 per year said they were worried about rising prices – more than any other income bracket – relative to just 12 percent of those earning more than £50,000.

Nine in ten parents living with a dependent child between the age of 0 and four said they felt worried, compared to 76 percent of non-parents.

According to a survey conducted by financial services provider SunLife, over half of respondents over the age of 50 reported energy bills kept them awake at night.

However, these UK-wide findings fail to convey the differences in people’s lived experiences in different parts of the country. 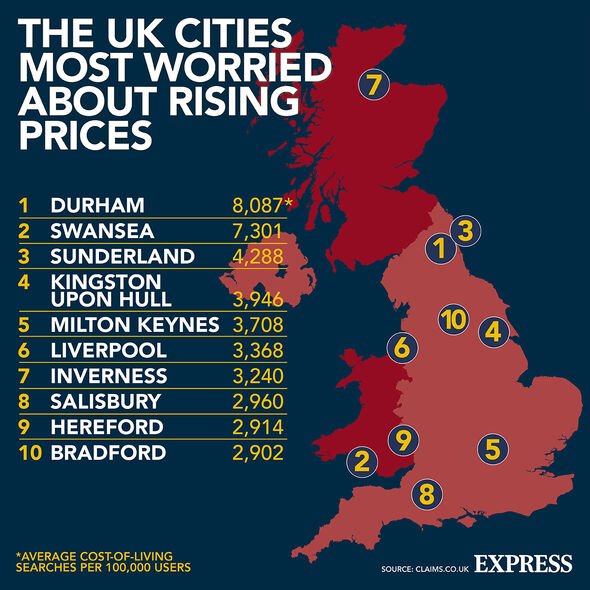 To pinpoiny who was the most worried by the cost-of-living crisis, personal injury lawyers Claims.co.uk analysed annual area-specific Google search patterns for terms about financial concern, such as “cost of living help” and “cost of living support”.

The study revealed Durham to be the UK city expressing the most fear about rising prices, residents accumulating 8,087 searches for related phrases per 100,000 users over the last 12 months.

Swansea ranked as the second most concerned city, amassing 7,301 searches per 100,000 users as residents look for advice to tackle the cost of living crisis. The estimated monthly costs of a family of four in Swansea amounted to over £2,252 excluding rent, whilst for a single resident this could add up to over £634. 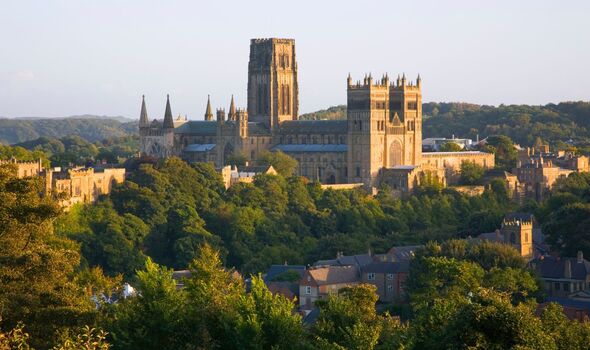 Urban policy research unit Centre for Cities has identified the reasons behind why some UK towns have good reason to be more worried than others about the cost-of-living crisis.

In August, the think tank estimates annual inflation to be at 11.2 percent in Burnley, 10.8 percent in Blackpool and 10.7 percent in Bradford. This is nearly two percentage points higher than the rate of price increases in Southern cities such as London (8.7 percent), Cambridge (8.8 percent) and Reading (9.2 percent).

Centre for Cities pins this disparity on a number of factors. The least-insulated housing stock – thus the most inefficient and expensive to heat – tends to be concentrated in the North, where temperatures also happen to be colder.

People in Northern cities also commute more frequently and for longer distances by car than those in the South, where public transport is more popular, increasing their exposing to fuel price hikes. 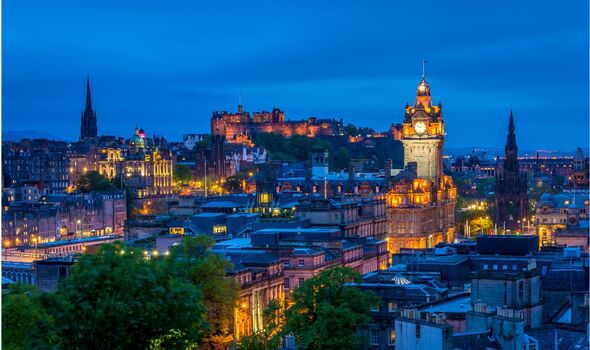 As the Centre for Cities research would suggest, the UK cities least worried about the cost-of-living crisis tend to be some of the wealthiest.

Claims.co.uk found residents of Edinburgh to be the least concerned of all, with only 416 searches per 100,000 users for terms conveying financial unease over the last 12 months. This comes as little surprise, given that research by Express.co.uk last year named Edinburgh the third highest earning city in the UK.

London topped the list of highest-earning cities, with an average monthly salary of £2,411, and was accordingly revealed to be the second-least worried city in the UK by the cost-of-living crisis, on 614 searches per 100,000 users. In third place came Southampton on 789, followed by Winchester on 822 and Oxford on 925.

However, the presence of student hubs such as London, Oxford and Cambridge among the list of cities least concerned by rising prices contrasts with the findings of the Student Money Survey 2022, which found 82 percent of students to be worried about making ends meet while studying.

The survey found daily living costs for students to have risen 14 percent on the year – ahead of the UK’s headline inflation – with average monthly outgoings for students now at £924 a month, rising to £1,089 if they are doing a degree in London.