LONDON — Prime Minister Theresa May announced her resignation on Friday after three years of trying and failing to pull Britain out of the European Union, throwing her country into an unpredictable situation and setting off a bare-knuckled contest among other Conservative lawmakers to replace her.

As she stood behind a lectern outside 10 Downing Street, Mrs. May admitted that a different leader was needed to shepherd the split, known as Brexit. But she also warned that the unyielding stance taken by the hard-line factions of lawmakers who had proved her undoing would have to change.

“To succeed, he or she will have to find consensus in Parliament where I have not,” Mrs. May said. “Such a consensus can only be reached if those on all sides of the debate are willing to compromise.”

Whether such compromise is even possible in Britain’s polarized politics is unclear at best.

Brexit has splintered both the Conservatives and the opposition Labour Party into warring factions since the referendum that narrowly approved the departure on June 23, 2016. A second referendum that could keep Britain in the European Union remains a distant possibility. 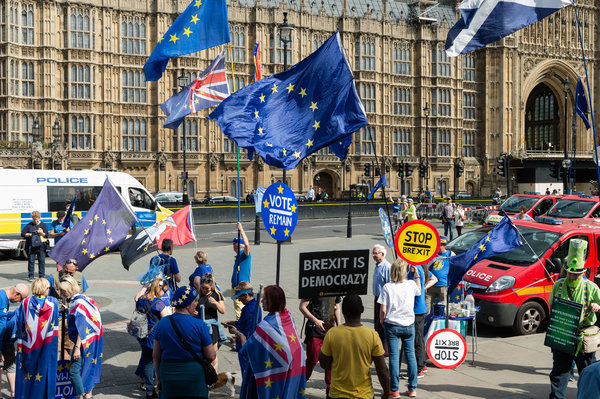 But many Conservative lawmakers have grown more hard-line during Mrs. May’s long, fractious tenure and now support leaving the bloc with no withdrawal deal at all — a move opposed by a majority in Parliament and one that most analysts warn could bring dire economic consequences.

Mrs. May’s departure, eagerly anticipated even by members of her own cabinet, is certain to mean a politically charged summer in Britain. Mrs. May said she would step down as Conservative Party leader on June 7, a few days after President Trump makes an official state visit. The contest to succeed her will begin the following week, and Mrs. May will remain in office until her successor is chosen.

Brexit, meanwhile, will remain in a state of suspended animation until a new leader is chosen. Britain was originally scheduled to leave the European bloc on March 29, but the deadline was extended to Oct. 31 after Parliament refused three times to pass the withdrawal agreement that Mrs. May had negotiated with European leaders.

Boris Johnson, the former foreign secretary and a hard-line supporter of Brexit, on Friday signaled an unflinching attitude, foreshadowing the tone for a leadership contest. He is a leading contender to replace Mrs. May.

“We will leave the E.U. on Oct. 31, deal or no deal,” Mr. Johnson told an economic conference. “The way to get a good deal is to prepare for a no deal.”

Opposition figures relished Mrs. May’s departure. Jeremy Corbyn, the Labour leader who has sparred relentlessly with the prime minister in the House of Commons, described her resignation as an indictment of a Conservative Party riven for decades by the issue of Britain’s membership in the European Union.

Mr. Corbyn said she had “now accepted what the country has known for months: She cannot govern, and nor can her divided and disintegrating party.”

Lawmakers from Mrs. May’s own side were more generous, despite many of them having been involved in back-room machinations to oust her and having already begun campaigning in private to succeed her. Mrs. May’s government — deeply divided, and sometimes chaotic — suffered around three dozen ministerial resignations during her tenure.

Andrea Leadsom, who only two days earlier quit Mrs. May’s cabinet to protest her latest effort to revamp her Brexit plan, said the prime minister’s departure was “an illustration of her total commitment to country and duty.” Ms. Leadsom, a pro-Brexit lawmaker, is likely to be among the crowded field of contenders for her job.

To decide the leadership contest, Conservative Party lawmakers will first winnow a long list of contenders to two, then hand the choice to the party’s roughly 120,000 members, who largely favor a no-deal exit and are expected to choose the new leader around July.

That will leave the new prime minister only a few months to try to rebuild the wreckage of Mrs. May’s deal — and then decide what to do if that fails. To make matters trickier, the leadership of the European Union is set to change during the coming months. The bloc’s leaders have insisted that their position on Brexit will not budge, making it difficult to see how Mrs. May’s successor will wring new concessions from them.

In Brussels, and even in some quarters in London, Mrs. May won sympathy for her resilience and knack for absorbing political punishment. But Mrs. May failed at her sole objective: delivering Brexit. And she also left behind a political system that is more deadlocked and deeply polarized than before.

Her Conservative Party faces a rejuvenated adversary in Nigel Farage, the former leader of the U.K. Independence Party, who stormed back onto the political scene amid Mrs. May’s failure to win backing for her Brexit deal.

The party Mr. Farage now leads, the Brexit Party, is expected to do well in the European Union’s parliamentary elections this Sunday — elections that Mrs. May had promised would never take place on the assumption Britain would be out of the bloc by now. The Conservatives are braced for a collapse in support when the results are declared.

If the results are as bad for the Conservatives as some lawmakers fear, that could rattle the party and make the selection of a hard-line Brexiteer successor to Mrs. May even more likely.

On the other side, many pro-Europe Remainers also are likely to have used the European elections to register their anger at the Brexit process, voting for smaller and unabashedly anti-Brexit parties that back holding a second Brexit referendum. If Mrs. May’s successor is a hard-line Brexiteer, killing the idea of a soft Brexit compromise, Mr. Corbyn will face even more pressure to end his months of dithering on the issue and adopt a firmly anti-Brexit stance.

Mrs. May’s undoing came after her final, desperate effort to win passage of her withdrawal plan in Parliament. Conservative lawmakers reacted with fury after she softened her original Brexit plan, notably by allowing Parliament to vote on whether to remain in a customs union with the European bloc and also on whether it wanted another public referendum on the deal.

Those ideas were anathema to hard-line Brexiteers who saw them as a betrayal of the 2016 referendum result, but seen as far too mild by pro-Europeans in the Labour Party.

Mrs. May’s successor will inherit a daunting political calculus, within the divided Conservative Party and inside Parliament.

Mrs. May will continue as a member of Parliament after stepping down as prime minister.

Her downfall echoed that of another Conservative Party leader undone by divisions over Europe, Margaret Thatcher, complete with the sexist overtones of some of Mrs. May’s adversaries this week suggesting her husband step in to tell her she had to resign.

By the end of Friday, Mrs. May’s plea for a compromise was already running into stiff headwinds, with a staunch Brexiteer and former leader of the Conservative Party, Iain Duncan Smith, writing, “No, compromise in search of the lowest common denominator is not the way forward. It becomes a dirty word.”