Theresa May was heckled by an audience member as she started a speech at the Conservative Party’s Wales conference, where the Prime Minister was told to “resign”. The Conservative Party suffered a massive defeat in the local elections losing over 500 seats, with the Liberal Democrats, Green Party and Independent candidates picking up votes. As the Prime Minister started her speech, the heckler stood up and shouted out: “Why don’t you resign?”

Jeers were heard from some members of the audience before some started chanting and the heckler was escorted out of the venue.

Responding to the heckler the Prime Minister started her speech in Welsh, saying: “Good afternoon”, which prompted a round of applause.

Then, speaking in English, Mrs May said: “It’s great to be back in North Wales again.

“I have to say, my experience of North Wales is that everybody I meet here is friendly.” 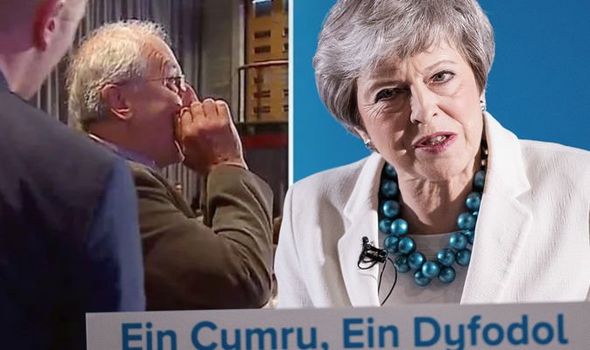 Why don’t you resign?

Commenting on the incident, Sky News host Adam Boulton said: “This is Llangollen in Wales where the Prime Minister is speaking to the Welsh Tories.

“As you can see a gentleman has clearly disrupted and is being escorted out.”

It comes after the Tories suffered huge loses in the local elections in England, losing over 500 councillors, with some blaming Brexit chaos for the disastrous night.

Addressing party members, the Prime Minister admitted it the “results were very difficult for our party”.

Giving her sympathy to those who had lost their seats, Mrs May added: “I want to commiserate with everyone lost yesterday.

“I was a local councillor. I know how hard it is. I’ve knocked on the doors, I’ve delivered the leaflets.”

Earlier, Tory party chairman Brandon Lewis told Sky News: “I have said for a while these are going to be tough elections for us.

“The reality is we were fighting these elections from a real high water mark for us off the back of the 2015 general election.

“People are frustrated with where they see parliamentarians are. And the fact that we have found this impasse in parliament.

“It’s a stark reminder to everybody in the House of Commons that we need to get past that impasse, deliver on what people voted for, and focus on that as parliamentarians as well.”

However, the party held on in the bellwether council of Swindon, seen as a possible Labour gain, and took Walsall and North East Lincolnshire from no overall control.

The Labour Party also suffered defeats of around 70 councillors in the local elections, as the Liberal Democrats, Green Party and independent candidates made huge gains.

Tory leadership POLL: Who do you think should replace Boris Johnson? VOTE HERE

Trump BOMBSHELL: US President SWERVES Parliament to address troops while in UK