Theresa May “is going to quit tonight” with Andrea Leadsom “poised to mount a leadership bid”, according to reports, as the embattled Prime Minister struggles to win support on her new Brexit offer. The claims Mrs May will quit this evening come from a “very senior MP”, according to Sky News political correspondent Jon Craig. Mr Craig revealed: “I’ve heard from a very senior MP that the Prime Minister is going to quit tonight, unconfirmed. I’m also told that Andrea Leadsom is poised to resign to mount a leadership bid.

“Remember she stood against Theresa May in 2016 then dropped out.

Members of Mrs May’s own Cabinet are turning on her as she she faces intense pressure to quit. 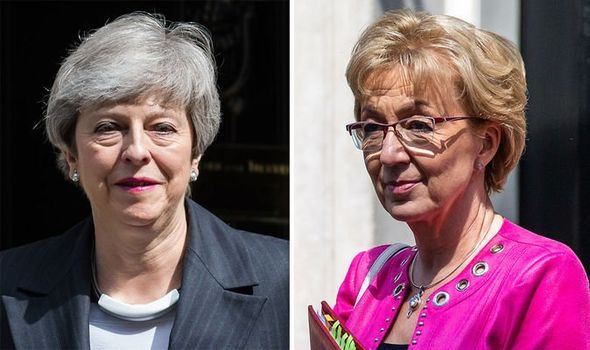 I’ve heard from a very senior MP that the Prime Minister is going to quit tonight, unconfirmed

ITV’s political correspondent Paul Brand said Cabinent members were mounting a challenge to oust her as David Mundell, Secretary of State for Scotland, called a meeting with the Tory leader to discuss her future.

He tweeted: “Rumours – not yet confirmed, but equally not being denied – of a move against PM by cabinet today. Source says “it’s looking likely”. Stand by your Twitter feed.

“David Mundell has asked for an urgent meeting with the PM this afternoon following her statement to MPs. He is not acting in coordination with other cabinet ministers but the expectation is that this is going to be a conversation about her future.

“The Scottish Secretary – bar a spat over Scottish fishing rights – has been one of the most loyal defenders of the PM’s deal. It would make sense if he was the one to break the news gently that it is time for her to go, much like Ken Clarke did with Margaret Thatcher.”

Furious Tories are now urging Mrs May to resign from her party “immediately”, describing the offer as “desperate, deluded and doomed”, with more than 50 Conservative MPs vowing to vote against it.

David Jones, the former Brexit minister, said: “I have been an MP for 14 years and I have never seen such anger among colleagues. She is desperate, she is deluded and she is doomed.”

Leadership rivals Boris Johnson and Dominic Raab were among Tories who backed Theresa May’s deal in March but have vowed to oppose the Withdrawal Agreement Bill (WAB).

Rejection of the WAB heaps further pressure on Mrs May to quit immediately, but some Tories called on her to go now without even risking the humiliation of a fourth Commons defeat on Brexit.

Mrs May’s last-ditch attempt to get a deal through included offering a vote on whether to hold a second referendum, as well as a choice over the UK’s future customs arrangements.

The deal was described as “dead on arrival” by Conservative Mark Francois, vice-chairman of the European Research Group (ERG).

And the beleaguered Prime Minister now faces a fresh bid to eject her from Downing Street from the 1922 backbenchers’ committee, which meets later on Wednesday.

Tory MP Nigel Evans, who sits on the 1922 executive, said he would be seeking a rule change to hold another confidence vote and the Prime Minister should “make way for fresh leadership without handcuffing her successor to a poisoned baton”.

Mail On Sunday’s Dan Hodges tweeted: “Downing Street: ‘No plans for a statement at this stage’.”