George Osborne insisted Theresa May made a mistake when she decided to “side” with Brexiteers instead of trying to bring the two sides of the Brexit debate onto common ground. The former Chancellor insisted the Prime Minister had failed to seek a compromise after she was elected leader of the Conservative Party and warned she will be unable to secure a deal with the Labour Party so late in the negotiations to leave the European Union. Speaking to ITV Peston on Wednesday, Mr Osborne said: “I always thought the Conservative Party and Theresa May when she became leader should have said right from the beginning, ‘we’re going to try and bring everyone together.’

“She didn’t do that, she immediately sided with one side of the argument rather than the other.

“If right from the beginning she had tried to find a compromise deal – by the time she then reached out to Labour to say ‘maybe, let’s talk about a customs union,’ it’s been too late, really, and her authority was shot.”

Mrs May only reached out to the Labour Party after she had agreed to a further extension of the Brexit deadline until October 31. The extension was the result of Parliament’s failure to agree to the withdrawal agreement the Government negotiated with Brussels and to agree on an alternative to the deal in a series of indicative votes in March.

The former Tory frontbencher also warned any potential future leader of the Conservative Party the solution to the Brexit deadlock is a “national coalition.” 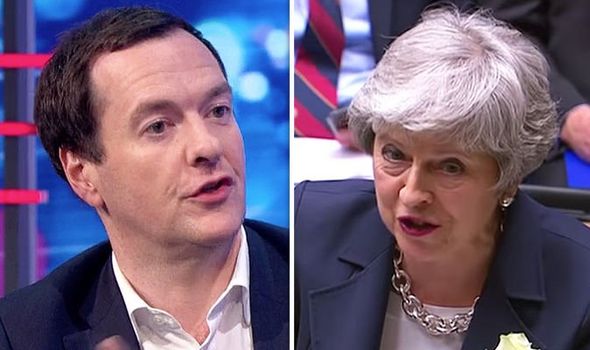 He continued: “In the end, the Conservative Party is only going to remain in Government if it both wins in seats like West Yorkshire and in Winchester and Oxfordshire and places like that.

“Creating that national coalition is not something she has been able to do and it’ll fall to the new leader, whoever it is, to see if they can do it. If they can’t, the Tories will be out.”

Theresa May has been facing mounting pressure from both Tory MPs and grassroots Conservatives, who will be hauling the Prime Minister in front of an emergency meeting of the National Conservative Convention on June 15 to demand she step down.

Sir Graham Brady, chairman of the 1922 Committee which represents backbench Tory MPs, said he expected a response from May to their demand that she quit regardless of whether her deal is passed by the Commons or not.

Sir Graham also said Mrs May was planning to bring legislation implementing the EU withdrawal agreement before the European parliamentary election of May 23.

Mrs May has previously held off introducing the thrice-defeated Withdrawal Agreement Bill, seeking guarantees from Labour that they would not vote it down – which she has not yet got.

If she is to prevent MEPs from having to take their seats at the European Parliament on July 2, the bill needs to start its progress through Parliament this month, Downing Street sources told the Times.

According to our results, the number of people who said they would vote for the Conservative Party during the EU poll was so small it registered as a humiliating 0 percent.

The survey suggests a crushing victory for the Brexit Party which would send shockwaves through the political establishment on both sides of the Channel.

Speaking before the results of the poll were released, Nigel Farage predicted the European elections in two-weeks time would “change everything”.

He said: “I think this new Brexit Party that I set up four weeks ago has kind of appeared like a jack in a box.

“I think we are going to win these European elections. Possibly win them in quite a big way.

Exeter and Sunderland to get new Nightingale Hospitals