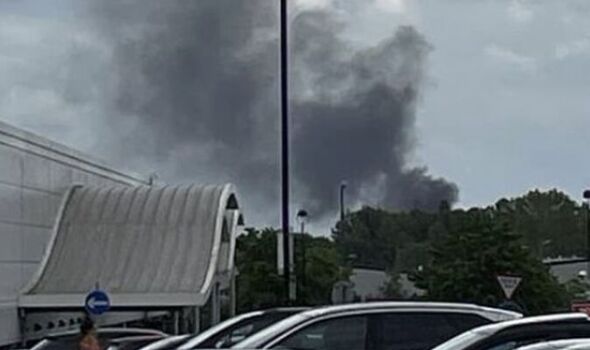 17 fire fighters and three fire engines have been sent to the scene of a huge fire in Coseley, Birmingham.

Black smoke can be seen billowing into the air from the blaze.

It can reportedly be seen “from some distance”.

The alarm was raised at 4.11pm today.

Residents are being urged to keep their windows and doors closed.

A spokesperson for West Midlands Fire Service said: “Four crews are currently attending a fire, which was reported to us at 16:11, at a yard in Coseley, Wolverhampton.

“The incident is believed to involve a yard containing coal dust and pulverised coal.

“Smoke can be seen for some distance and residents in the area are advised to close doors and windows until the smoke ceases.

“Crews from Bilston, Dudley, and Tipton, with a total of 17 firefighters, have been mobilised to the incident.”

“If you live in the area, please continue to keep doors and windows closed until the smoke clears.

“West Midlands Police is assisting with road closures, so please avoid the area where possible.”

Two days ago West Midlands Fire Service rushed to a golf club after two fires started, both believed to be caused deliberately.

The fire engulfed a disused outbuilding and a large area of woodland and scrubland.

While at the scene, firefighters discovered a shed at the golf course had been destroyed by fire.

Both fires are believed to have been started deliberately.