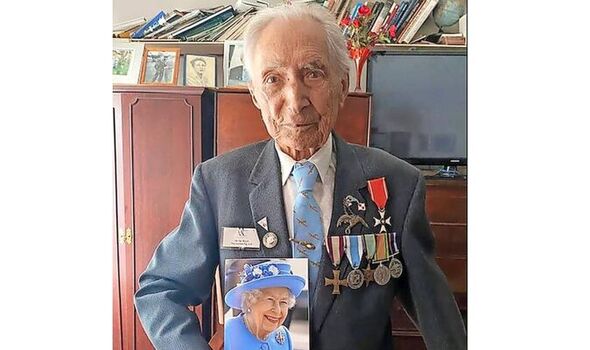 Jan Stangryciuk, 100, was targeted by three men claiming to be from a water company.

The veteran and his elderly wife were distracted by one of the heartless thieves as the others went in search of valuables.

The conmen fled after about 10 minutes and the couple later realised the medals and money had vanished.

Mr Stangryciuk and his wife Jadwiqa were badly shaken by the ordeal at their home in Ealing, west London.

Mr Stangryciuk, who was born in Poland, came to Britain and volunteered for war service in 1940, joining the RAF.

Describing their ordeal, Mrs Stangryciuk said: “Jan didn’t realise what was going on. We were both completely confused. The whole thing lasted maybe 10 minutes.

“It wasn’t until a couple of hours later that we realised what had actually happened. I was in such nerves that I didn’t know what to do.”

The theft has left friends outraged. George Byczynski, who has set up a gofundme page for the couple, said: “Jan Stangryciuk is a Polish and British hero.

“We all owe a debt of gratitude to Jan and others like him who risked and gave so much during the war.

“It is enormously sad that in his 100th year he has been targeted like this. But while this ordeal has been awful, the response from the public has been tremendous.”

Mr Stangryciuk recently celebrated his 100th birthday and was proud to get his telegram from the Queen. In 1942, he had barely survived after the Wellington bomber he was in crashed and burst into flames in southern England.

He bravely tried to save his crew-mates, suffering terrible burns to his face. After leaving the RAF, he worked as a delivery driver before retiring.

'Let me be clear, you did not win' – woman defiant as child rapist jailed