Home » Europe » ‘This Is All We Can Afford’: Shrinking Lives in the English Countryside

ALSTON, England — It was not until Trevor Robinson received a letter notifying him of a missed appointment at the hospital that he realized he had not spoken to another human being in more than six weeks.

Mr. Robinson, a 77-year-old retired landscape gardener, had spent most of that time alone, sitting on his favorite frayed leather recliner looking out the window at the moorland surrounding his cottage in the northwestern county of Cumbria.

“When you spend every second by yourself, you lose track of time,” he said as tears trickled down his face. “I feel lonely, very lonely, and bored.”

Mr. Robinson’s isolation, shared by thousands of older people in Britain, is the result of a chain of cause-and-effect that stretches from rural Cumbria to the halls of power in London. He used to ride a subsidized bus to town until the local council discontinued the route. The council was responding to steep budget cutbacks stemming from the Conservative-led government’s decade-long austerity program.

Even as austerity has sliced through nearly every aspect of British life, the government has protected high-profile benefits for older people, and it has raised the state pension on a more generous basis than previous administrations. 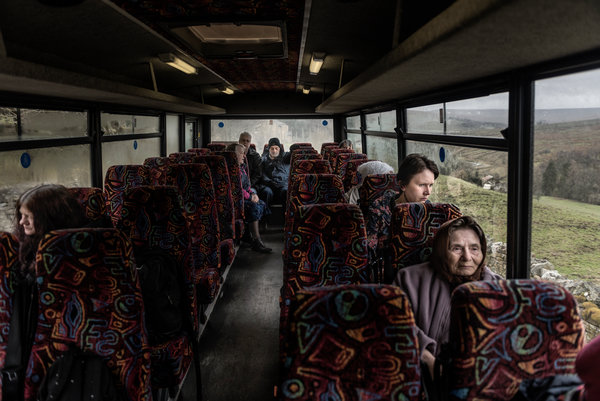 But a free bus pass is of little use if buses no longer reach you, and many retired people have discovered that apparently minor cuts — the elimination of a bus route, the closing of a tiny health care center, community center or post office — can profoundly upend their lives.

The effects are especially pronounced in rural areas, where the isolation of older residents has emerged as one of the greatest, and largely hidden, costs of local councils’ straitened budgets, with funding slashed by half nationwide since 2010, the National Audit Office has found.

Cumbria, Land of Beauty and Poverty

While experts say these problems are common to much of Britain’s countryside, they are particularly severe in Cumbria. Best known for its Lake District National Park and historic lakeside mansions, it is also one of the poorest rural areas in England.

Twenty-nine of its communities are among the 10 percent most deprived nationwide. Household income levels trail the national average in all but one district.

And by 2020, nearly a quarter of Cumbria’s residents will be over 65 — 5 percentage points higher than in 2008 and double the proportion projected for London. Half of those have long-term health problems or disabilities.

Cumbria has had problems since its lead and zinc mines closed in the 1960s. But they have been amplified by austerity. This year, Cumbria County Council plans to cut about $23 million from its budget to cushion a steady drop in funding from the national government — to $17.7 million this year from nearly $200 million in 2012.

By 2021, the council expects the grant to disappear entirely, despite recent declarations by Conservative Party leaders that the austerity era is over. In April last year, Cumbria put up its local council tax by 4 percent, the first rise in several years, after the government eased restrictions on such increases.

“It’s always been expensive to deliver services to rural communities because the population is so spread out,” said Peter Thornton, the council’s deputy leader and cabinet member for finance. “But since the central government cuts that started in 2010 this becomes more of a challenge each year.”

The council’s first major cut to services came in 2014: ending bus subsidies. It saved around 9 million pounds, around $12 million, a year, and lost about 60 percent of the area’s bus services.

“But we are starting to rethink ways of providing transport,” Mr. Thornton said. “There’s increasing recognition of how these cuts have contributed to the problem of rural isolation and the impact on people’s mental health.”

Bus cuts are also becoming a national issue. The leader of the opposition Labour Party, Jeremy Corbyn, proposed last month to spend £1.3 billion, or about $1.7 billion, to restore lost services.

Until recent years, the quality of life for seniors had steadily improved. From a high point in the mid-1990s, the poverty rate among older people had declined, the Joseph Rowntreee Foundation says, falling to 13 percent in 2012-13 before rising to to 16 percent in 2015-16. But one in six pensioners remain in poverty, and the rate has started to increase.

“After positive progress, it is worrying that the number of pensioners living in poverty is once again on the rise,” said Caroline Abrahams, charity director at Age UK, Britain’s largest charity working with older people. And with the slowdown in economic growth associated with Britain’s tortured withdrawal from the European Union, the government is facing renewed budgetary strains.

Five years ago, Mr. Robinson used to take a bus to the city of Carlisle, about 40 minutes away, where he shopped at his favorite grocery store, Morrison’s, shot darts at a club and played cards and watched television with his best friend, Billy.

That ended in 2014, with the withdrawal of bus subsidies.

“I tried taking the new bus, but it only waits in Carlisle for an hour and a half before coming back,” Mr. Robinson said. “That’s just not enough time to get anything done, and if you miss the bus, you’re doomed.”

Since then, Mr. Robinson has barely left the house. He spends most of his $175 weekly pension on food from the local store, which he gets a lift to once a week, and he rents a television.

“I used to buy my favorite beef lasagna and fresh veg from Morrison’s,” he said. “But there’s not much choice in the village, so now I’m mainly eating instant soup.”

He said he called the council to inquire about transport options to the city, but he was told, “Sorry sir, we simply do not have the funding.”

Mr. Robinson draws a simple lesson from all this: “You need to be rich or upper middle class to survive in the countryside nowadays.”

Two years ago, barely able to walk after he developed an infection following bunion surgery, Mr. Robinson applied for an attendance allowance, a benefit for people over 65 who are disabled. His problem was deemed not severe enough.

“You pay taxes your whole life thinking the government’s going to take care of you when you’re old and dying, but their message to me was loud and clear,” he said, his voice rising. “They don’t give a damn.”

Many seniors and their advocates say such rejections have grown increasingly common as welfare rules have tightened.

“General benefits are a lot harder to get than 10 years ago,” said Hugh Tomlinson, the deputy C.E.O. of Age UK in South Lakeland, part of Cumbria. His clients’ rejection rate for attendance allowance, he says, has doubled in three years.

“A lot of those decisions get overturned on appeal,” Mr. Tomlinson said, adding that he suspected the rejections were part of a new strategy calculating that few older people would take that step.

“Our offices,” he said, “have had to convince a lot of people to appeal.”

Not so long ago, Mr. Robinson and other seniors could have fallen back on their families for help with shopping and doctor’s appointments, not to speak of simple visits. But diminished job opportunities and benefit cuts have forced many rural young people to move to distant cities.

Trevor Robinson’s son, Liam, had to leave a rental near Alston, about 25 minutes from his father’s house, when the authorities cut his benefits last year, saying he had not applied for enough jobs.

He says he also could not afford the heating bills, another major obstacle for rural residents, especially in high altitude areas like Alston. He now lives in subsidized housing in the city of Lancaster, about an hour and a half’s drive from his father.

“I miss the clean air and space of the country and being able to check in on my pops,” he said. “But this is all we can afford.”

Perhaps most disturbing for older residents is the shrinking health care sector, as hospitals close and doctors cluster in larger towns.

This has been driven in large part by a funding formula that measures wealth partly on the number of cars per household — an absolute necessity in remote areas, but not in cities.

As a result, officials say, Cumbria receives one of the lowest public health allocations per capita in the country, around $50 compared with about $235 in London.

In 2016, Alston community hospital’s inpatient unit, with its seven beds, had to close because of staffing shortages caused by its isolation and lack of transport. Local residents met the decision with fierce opposition, because the beds were often the only place where the dying could spend their final days among friends and family.

“I’ve seen two people there who were about to leave us,” Steve Frogley, 69, a retired electrician, said. “Now, people in that state are all the way in Carlisle or Hexham, and it’s really hard for their loved ones to go and visit them.”

Carlisle and Hexham are about an hour’s drive from Alston.

But many in Alston seemed unconvinced.

“The hospital is sadly missed,” Mr. Frogley said. “It’s the biggest loss to the community since I’ve been here. It would have been a wonderful place to die.”

Ceylan Yeginsu is a London-based reporter. She joined The Times in 2013, and was previously a correspondent in Turkey covering politics, the migrant crisis, the Kurdish conflict, and the rise of Islamic State extremism in Syria and the region. @CeylanWrites • Facebook