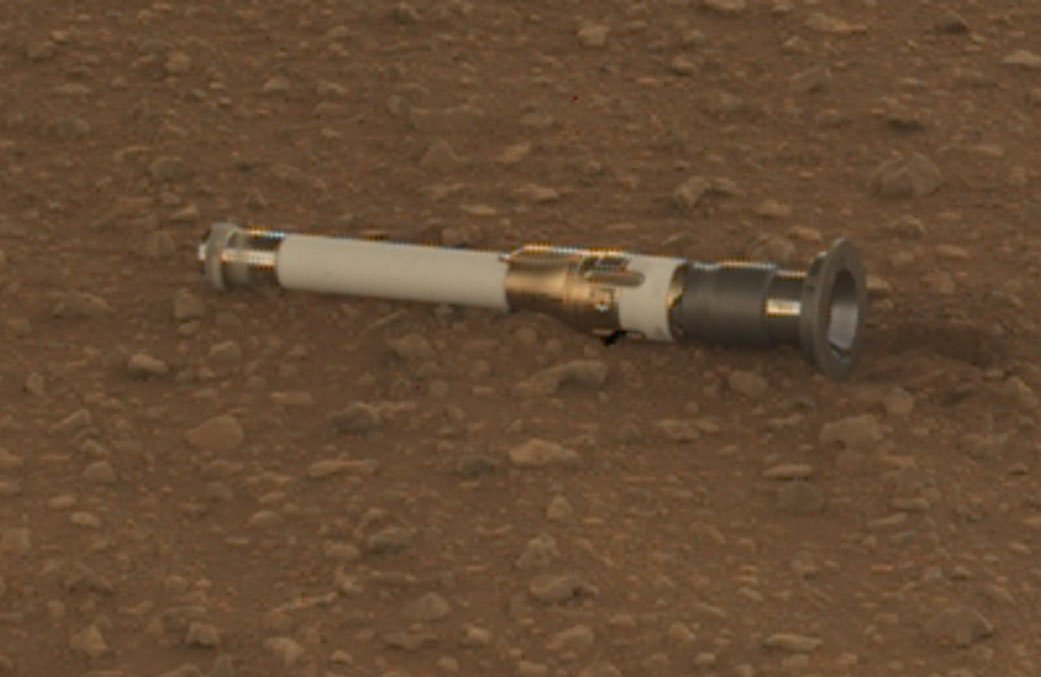 An incredible new picture shows a lightsaber-shaped object on Mars.

However, this sci-fi-style scene actually features a titanium tube containing a rock sample resting on the Red Planet’s surface.

It was placed there Wednesday (21 Dec) by NASA’s Perseverance Mars rover – ready to be blasted back to Earth on a small spacecraft.

The sample tube will form a ‘depot of tubes’ that could be considered for a journey to Earth by the Mars Sample Return campaign.

Over the next two months, the rover will deposit a total of ten tubes at the location, called ‘Three Forks,’ building humanity’s first sample depot on another planet.

The depot marks a historic early step in the Mars Sample Return campaign.

Perseverance has been taking duplicate samples from rock targets the mission selects. The rover currently has the other 17 samples (including one atmospheric sample) taken so far in its belly.

Based on the architecture of the Mars Sample Return campaign, the rover would deliver samples to a future robotic lander.

The lander would, in turn, use a robotic arm to place the samples in a containment capsule aboard a small rocket that would blast off to Mars orbit, where another spacecraft would capture the sample container and return it safely to Earth.

The depot will serve as a backup if Perseverance can’t deliver its samples. In that case, a pair of Sample Recovery Helicopters would be called upon to finish the job.

In coming weeks, scientists have other opportunities to check Perseverance’s progress in making more sample deposits at the Three Forks cache.

Rick Welch, Perseverance’s deputy project manager at JPL, explains: ‘Seeing our first sample on the ground is a great capstone to our prime mission period, which ends on the 6th January.

‘It’s a nice alignment that, just as we’re starting our cache, we’re also closing this first chapter of the mission.’

A key objective for Perseverance’s mission on Mars is astrobiology, including the search for signs of ancient microbial life.

The rover will characterise the planet’s geology and past climate, pave the way for human exploration of the Red Planet, and be the first mission to collect and cache Martian rock and regolith.

Princess Stéphanie: The royal who joined the circus