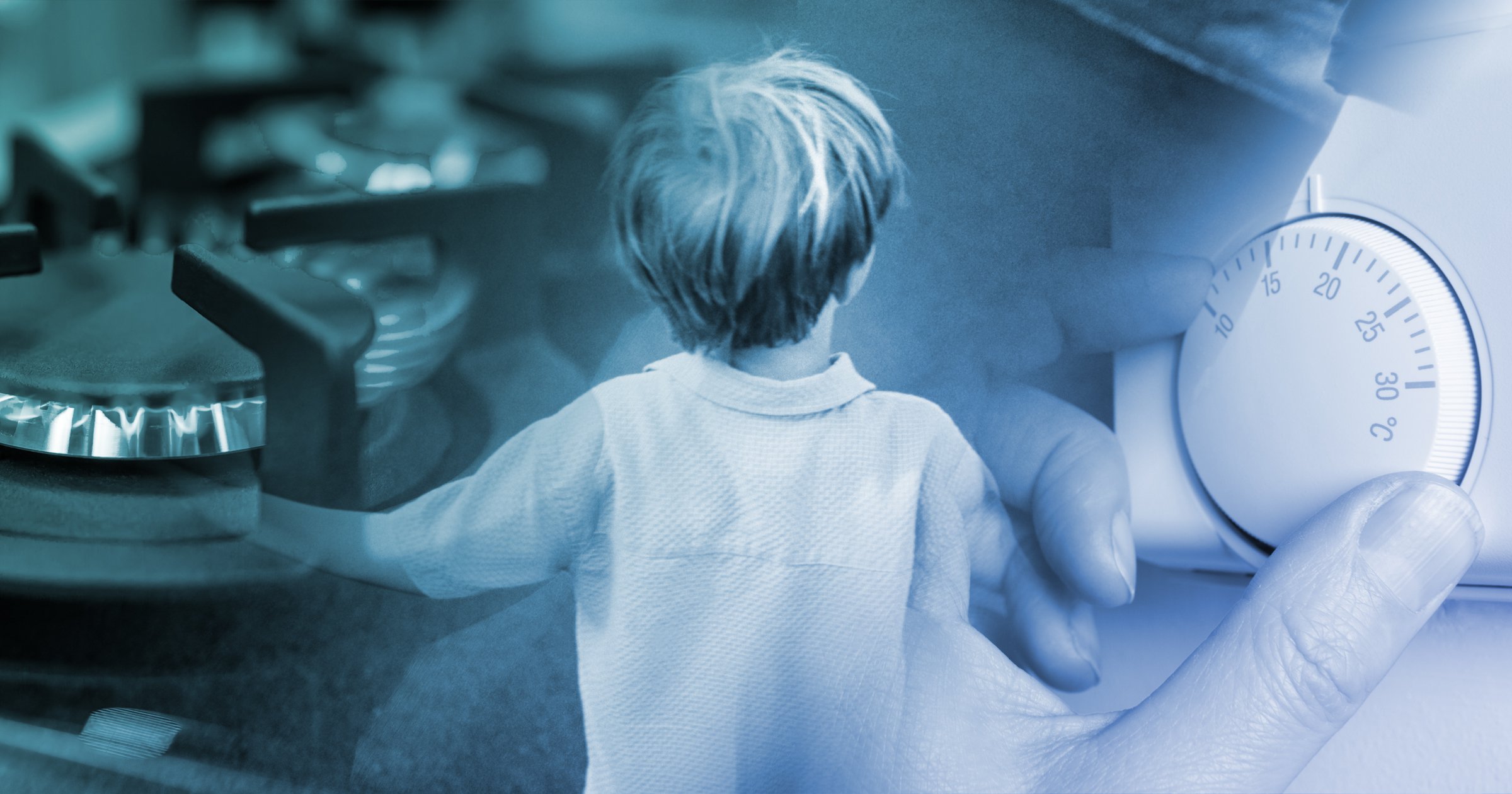 Tens of thousands of children face being hit by rocketing fuel prices as parents wrap up in blankets this winter to save on heating.

Dire predictions about the plight of struggling households follows bills surging by 12% on October 1 amid a wider cost of living crisis.

With another leap expected when the energy price cap is reviewed in April, campaigners are asking the government to throw struggling families a ‘lifeline’ this winter, saying the youngest in society with be hard hit.

One organisation helping those in need told how children are going without hot meals and showers. Parents, including those in work, are also sacrificing their own well-being, sitting in the ‘freezing cold’ in order to be able to save the heating for their children.

The Fuel Bank Foundation has helped 450,000 people to keep the gas switched on since the initiative was launched in 2015, providing vouchers through foodbanks and other agencies.

Spokesperson Matthew Cole said: ‘Fuel poverty doesn’t just affect adults, a third of the people we help are kids. They are going without showers and hot meals because their parents can’t afford to turn the gas on.’

Over the course of 2021, the Foundation had expected to help 30,000 children whose daily lives are impacted by fuel poverty.

‘Sadly, we anticipate that figure will increase as the cost of energy rises,’ Mr Cole said. ‘Using our fuel voucher scheme, the Fuel Bank Foundation’s priority is to get the household reconnected to the gas and electricity supply as quickly as possible, usually the same day, so families aren’t living without heat and hot water for prolonged periods.’

Families with disabled children will be tipped into poverty

Families with disabled children are one group being placed under severe strain by the rocketing cost of living.

One parent previously told Metro.co.uk how she will struggle to pay the bills with her eight-year-old daughter, who has cerebral palsy, needing her room to be constantly heated.

Stephen Kingdom, of the Disabled Children’s Partnership, said: ‘The increased cost of energy is yet another blow to the already stretched finances of families with disabled children.

‘Families face extra costs in bringing up a disabled child and many are on lower incomes and have to go without things other families take for granted. Many parents are unable to work because they do not get the support they need from the state to balance caring and a career.

‘Their children rely on warm homes to avoid their health conditions deteriorating. All this was made worse during the pandemic, as families saw the support they did receive reduce or stop altogether; the costs of caring rise and their incomes fall.

Even if it’s freezing, I wait for the kids

Stacey, 35, wraps up in blankets when home alone so she can save the power use for her two daughters – even when temperatures plummet.

‘Times are tough,’ she said.

‘The energy bill is expensive enough as it is and even after the price cap increase it is going to rise further in the winter months and cost me ridiculous amounts over the next year.

‘It just eats money that doesn’t exist. You have to look at everything else and see where you can save and what you can cut.

‘It’s my youngest daughter’s birthday after Christmas and then there’s clothes and shoes. It’s just hard all the time.’

The sales worker, from Bristol, was left to look after her five and seven-year-olds alone three years ago after their dad passed away.

‘I’m bringing up two children on a low wage with Universal Credit as a top up and I don’t get maintenance or anything extra,’ she said.

‘I don’t buy new clothes for myself unless I buy them from a catalogue where I can pay in instalments.

‘I use blankets and don’t put the heating on until the kids are home.

‘I’d rather sit in the cold and sit freezing, because I’d rather the kids were warm than me.’

Stacey, who asked to be identified by her first name, faces an energy price increase from £45 a month to £60, which she expects to rise to around £90 as the weather grows colder.

‘I chose to have my kids and I don’t expect anyone else to look after them but the living wage doesn’t match the cost of living and it hasn’t for some time,’ she said.

‘I read in a newspaper that there are reports about council tax rising by ridiculous amounts next year, when the price cap increases as well.

‘It’s never-ending and I’m dreading next year, it’s going to be hard.

Families are desperate for a lifeline

Imran Hussain, director of policy and campaigns at Action for Children, warned that families like Stacey’s need urgent support to stay afloat.

Mr Hussain said: ‘Struggling families across the UK are being squeezed from all sides after a difficult 18 months – by soaring fuel, food and energy prices and now from the £20-a-week cut to Universal Credit.

‘We know the poor pay more. Low-income families face disproportionally bigger heating bills because they often live in the worst housing, with the worst insulation, and because they are more likely to be using pricier meter tariffs for gas and electric.

‘Rising petrol and transport costs hit working families hard. Those with long term illnesses or who’ve lost their job in the pandemic are also finding it more difficult to shop around or travel to bigger, cheaper supermarkets.

‘The government desperately needs to throw these families a lifeline this winter – there’s no road to levelling up the country that starts with making more children cold and hungry this winter.’

Families now face an average £139-a-year rise in energy bills for customers on default tariffs and £153 for pre-payment consumers.

Around 15 million households will have to foot the 12% rise, the biggest jump since the energy cap was introduced in January 2019.

However the increase in the spring, when the backstop is reviewed, could surpass even these figures. Bills could rocket by £400 to £1,660 on average, according to analysts Cornwall Insight.

The government says it is tackling fuel poverty with a range of measures including investing millions in making social housing more energy efficient and extending the Warm Home Discount.

A spokesperson said: ‘Protecting households’ bills is ​a key priority which is why ​the Business Secretary has been clear that the Energy Price Cap will remain in place. We are supporting vulnerable and low-income households, including those with children, further through initiatives such as the Warm Home Discount, Winter Fuel Payments and Cold Weather Payments.

‘The uplift to Universal Credit and the furlough scheme were always temporary, to help people through the economic shock of the toughest stages of the pandemic. It’s right that the Government should focus on helping people back into work and supporting those already employed to progress and earn more.’

For more information about the Fuel Bank Foundation click here