About 10,000 fans had earlier walked from the city centre to the stadium, led by injured player Harry Maguire, waving Leicester FC banners and Thai flags along the eight-mile route in memory of Vichai Srivaddhanaprabha, who was also the club’s owner.

James Maddison, Andy King and Hamza Choudhury were also on the march which fans dubbed ‘5,000-1’, the club’s pre-season odds before they won the Premier League title two years ago. The chairman was one of five people killed in a helicopter crash outside the grounds of the stadium on 27 October.

Saturday marked the club’s first home game since his death. The team drew 0-0 against Burnley. 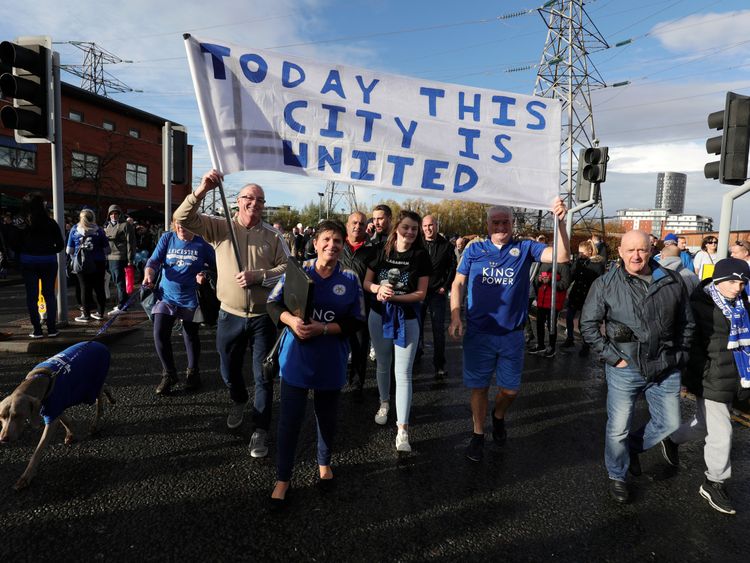 The club gave every supporter at the match a free scarf, pin badge and programme, tucked under their seats inside the stadium.

During the silence, the players gathered together, opposite members of the club staff who wore black, while fans held the white scarves reading “Mr Chairman”.

The two-minute silence also marked 100 years since the end of the First World War. 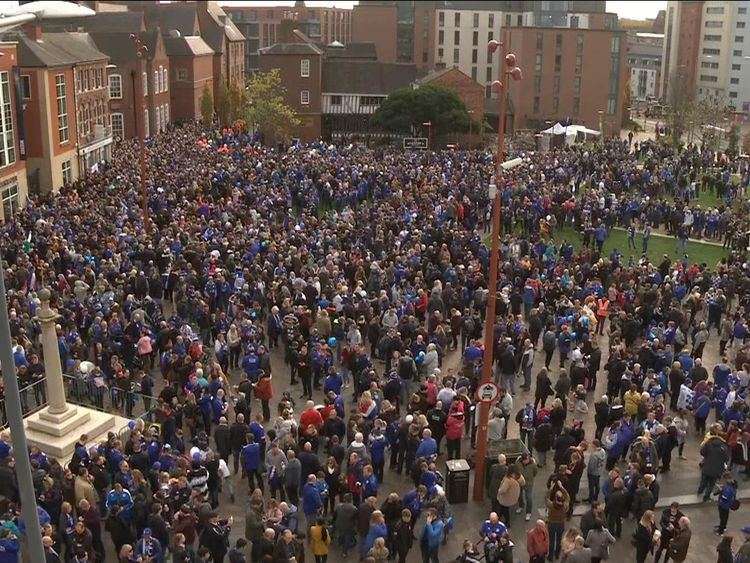 The squad also laid their own shirts down inside the stadium before the match, alongside the fan tributes. 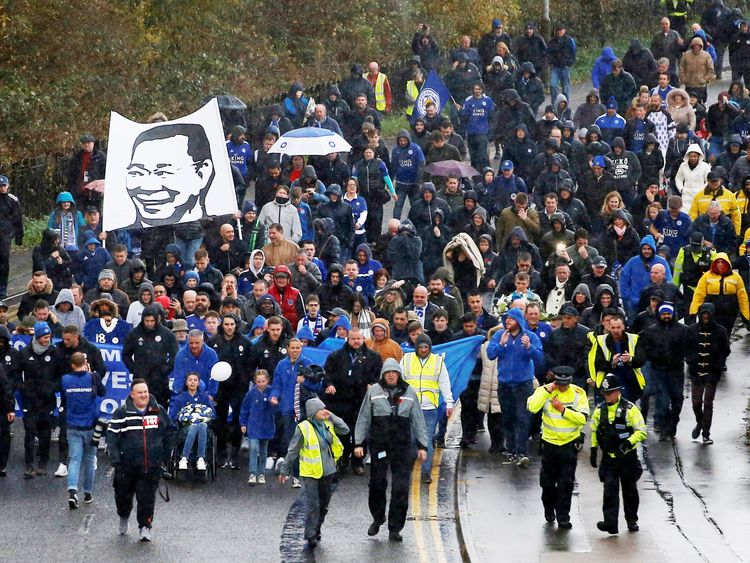 The club staff had the huge task this week of moving the thousands of tributes and flowers which had been laid outside the stadium, putting them into the car park to allow access.

The club has announced plans to commission a statue of the chairman to be installed outside the stadium.

His son Khun Aiyawatt wrote in a souvenir programme for Saturday’s match: “We will never be able to repay what he did for us – for me as his son, us as his family, everyone connected to Leicester City and beyond – but we are committed to honouring his memory and upholding his legacy. “Our continued growth as a club, our state-of-the-art new training ground and our planned stadium expansion will help realise his vision for Leicester City.

“I plan to commission a statue of my father, for outside King Power Stadium, as a permanent and fitting tribute to the man that made it all possible.

“He will forever be in our hearts. He will never be forgotten.”

Fans marvelled at a rainbow which appeared above the stadium after a brief rain shower, with some remarking “you couldn’t make it up”. 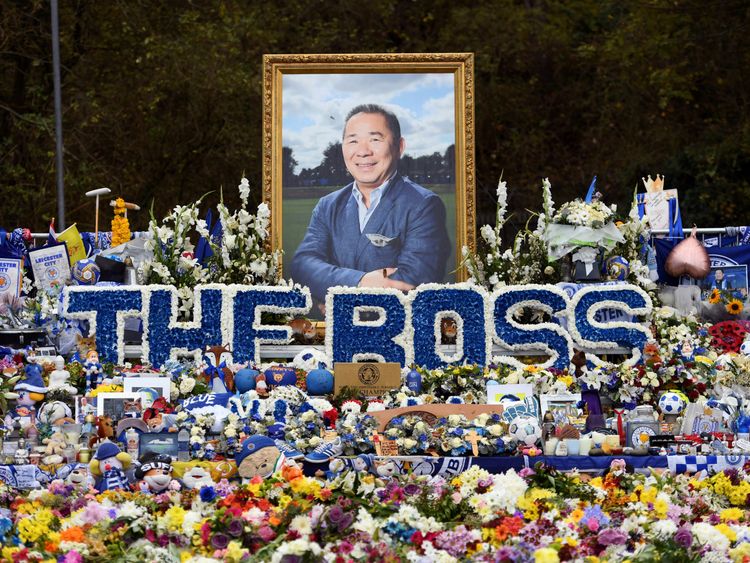 Writing in the programme, goalkeeper Kasper Schmichael said: “I was on the side of the pitch standing, chatting with some of those closest to him that night and waved him off as he took off, like I nearly always used to do after home games.

“What happened next will stay with me forever. It has replayed through my head every minute since, wishing there was something more I could have done.

“I stood for a long time at the police cordon at the back of the car park on the night of the 27th and again the next morning. Tears streaming down my face.

“He made me feel 10ft tall when I was in his company. He gave me a feeling of safety and no matter what was going on, everything was going to be okay.

“I really didn’t want to leave, I couldn’t! I wanted to be near him. It seems so wrong that this was how such a great life was ended.” 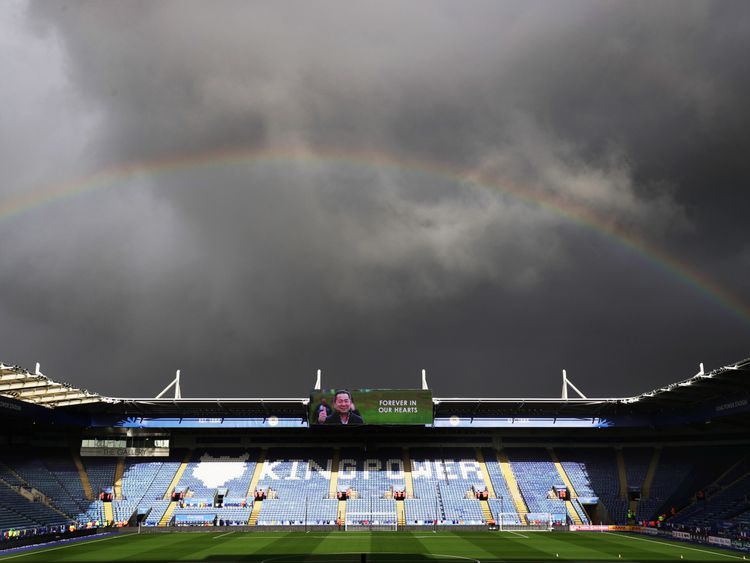 Before the match, his father, former Manchester United goalkeeper Peter Schmichael, spoke about his son’s efforts.

He told Sky News: “It has got two sides, the whole mentality, that his reaction was that, I think it speaks to his personality. “The other side of it is ‘what the hell are you thinking, you can’t jump into a burning plane’.

“That is just one little bit of what has been going on.

“It has been a really tough time, not just for him but for everyone at the club.”

Claudio Ranieri, who won the title with Leicester, was at the ground for the game. He said: “I think Khun Vichai will be remembered forever.

“I will remember him laughing. He was always smiling and thinking about the positives. He was an amazing man, he had electricity.”

Prince Harry military titles replacement: Should it be Princess Anne, William or Charles?