Three people are confirmed to have died after a multi-vehicle crash on the A1 in County Durham on Thursday evening, police have said.

The collision, near the village of Bowburn at 6.20pm, involved four cars and two lorries, one of which caught fire.

The three victims were a man driving a Toyota Hilux and a man and woman in a Vauxhall Crossland.

They have not yet been formally identified but their families have been informed, police said.

Several other people were injured in the crash and two people needed hospital treatment.

A man, 41, who was driving one of the lorries, has been arrested on suspicion of causing death by dangerous driving and he is in police custody. 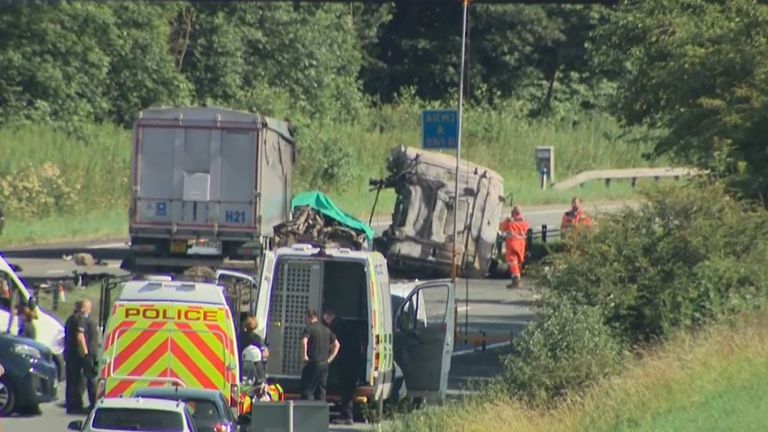 Detective Superintendent Dave Ashton, who is leading the investigation, said: “This was a harrowing incident for everyone involved and our thoughts are with the family and friends of those who have lost their loved ones.

“It has been incredibly upsetting and distressing for those who witnessed the collision, and for the emergency responders, including police officers, firefighters and paramedics, who attended the scene.

“We would therefore ask that people refrain from sharing photographs and videos from the collision out of dignity and respect for those who have lost their lives.

“This will be an extremely complex and lengthy investigation as the site of the collision is spread over some distance, and many of the vehicles involved have been severely damaged.”

The road is expected to remain closed on Friday, allowing investigators to work out what caused the crash and for any damage to be repaired.

Det Spt Ashton added: “We understand the significant disruption that this incident has caused, and would like to thank people for their patience, understanding and cooperation while we work at the scene.”

Gandhi’s glasses were found hanging halfway out of a letterbox. Now, they’ve sold for £260,000