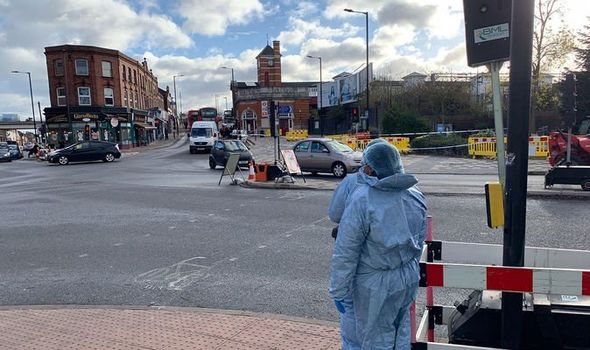 Police dashed to Wealdstone High Street in northwest London at around 7pm where they found three people with knife injuries. The boys, aged 14 and 16, and a 21-year-old man were rushed to hospital, where the older man is said to be fighting for his life.

Witnesses said that “even grown men” were running away from the chaos in the industrial and business area.

Some were particularly scared.

Speaking to My London, supermarket worker Carole, 42, said: “I have never seen so many police in my whole life and there was just confusion. People running around the high street.

“Then even grown men were running.

“We were scared that someone was going to attack us.

“Teenagers and a 21-year-old in hospital. How young. It’s stupid but you can see even from 14 years old people are having a knife and 21-year-olds. It seems all young people are now.”

Two boys, a 14-year-old and a 16-year-old, have been arrested on suspicion of grievious bodily harm, and remain in police custody.

A crime scene remains in place around Wealdstone High Street and an investigation is underway.

James, a builder who works close to the crime scene, is fearful for his own children.

“We are working close to where it all happened. We didn’t hear much but came this morning and police just told us there had been an incident and some areas we can’t go in until further notice,” the builder said.

“I heard it was kids, like teenagers. It makes me feel scared for my own kids. They live in London as well just round the corner, every day a new stabbing.

Forensic officers have been pictured at the scene today.

A spokesman for Metropolitan Police said: “Two people, a 14-year-old boy and a 16-year-old boy, have been arrested on suspicion of grievous bodily harm.

“They remain in custody at a north London police station.”